Today I am interviewing Davila LeBlanc, author of the new science-fiction novel, Syndicate’s Pawn: A Tale of the Jinxed Thirteenth.

DJ: Hey Davila Thanks for stopping by to do this interview!

DaVila LeBlanc: Well first of all thank you so much for having me here in the digital office. As for a bit about myself, I’m a HUGE science-fiction and fantasy buff. I’ve been writing since I learned the alphabet it would seem. I’ve always loved telling stories. I’m an avid role-player, where many of my story ideas come from. I’m also a sword master, so I feel I’m pretty ready for the zombie-apocalypse and woefully underprepared for the robot uprising. That is unless they are planning on giving us a fighting chance.

DJ: What is Syndicate’s Pawn about? I believe it is actually a follow up to you previous novel, Dark Transmissions, but it can be read as a stand-alone?

DaV: Syndicate’s Pawns is best described as Die Hard in space. We have a crew of clever criminals trying to board and take over the Jinxed Thirteenth, which happens to be crippled from the events of the previous book. In that respect it is a direct follow-up to Dark Transmissions. I feel like it can be read as a stand-alone, mainly because it involves the same cast only a different mission. My goal with the Jinxed Thirteenth series has been to create a sort of “episodic” feel to it, in which the characters grow, but also where the readers can just hop in whenever they feel like it.

DJ: What were some of your influences for The Syndicate’s Pawn?

DaV: I was fresh off watching Narcos on Netflix followed by the Hateful Eight. Narcos REALLY helped flesh out the Syndicate, which is an intergalactic network in the world of Jinxed Thirteenth.

DaV: Jessie Madison is the main character of the books so far. She is the last Human being in the universe. She awakens from thousands of years of crio-sleep only to learn she is pregnant and the last of her kind. I like her because while she is thrust into very difficult situations she remains courageous and pro-active. She doesn’t play the damsel in the distress all that well. Morwyn Soltaine, the captain of the Jinxed Thirteenth, is another character I love. He’s a pacifist and a man with a strict moral code, it’ll be fun in future tales to push that code to the limit. He’s also capable of admitting when he has made a mistake. I wanted to make him a privileged character who will, through working with different people, learn the price of that privilege. Chord is a Machina pilgrim who is determined to journey to Terra and discover whether or not it is alive. I like Chord because he observes the world with a true sense of innocence. Finally there is Eliana Jafahan, a hardened commando who serves as Morwyn’s second in command. She is no-nonsense take no-prisoners pragmatist. The mother/son analogue between her and Morwyn is going to grow into something interesting I have no doubt and I just think she is straight-up bad-ass.

DJ: What is the universe of Syndicate’s Pawn like?

DaV: The world of the Jinxed Thirteenth is set in the days of the Great Peace a.k.a THE COVENANT between machines and the descendants of humanity. This is the era of Galactic Nations and as such there are several religions, governments and degrees of technology, much like our present day world. The various races that call the explored universe home are descendants of Humanity. The Kelthans are techno-geniuses, which is why they are the dominant species. The Wolvers are less tech-savvy, but what they lack in tech they make up for in sheer determination. They also have developed a religion called “The Living Green” which is more of a spiritual practice that sees the universe as a living entity. Thegrans are giant humans who worship their ancestors. The Kohbran are nomad humans with reptilian traits who travel the cosmos on giant trees. The Darlkhin are mysterious immortal humans, rumored to have the answers to a great deal of the mysteries of the Lost History. This is a universe that is peaceful, on paper in any case, that being said there is turmoil in some nations, order in others and more…sinister goings-on behind the scenes. There are forces trying to maintain the Great Peace and those committed to destroying it.

DJ: What was your favorite part about writing Syndicate’s Pawn?

DaV: Oh conceiving the crew of the villains to go up against the crew of the Jinxed Thirteenth. I was also happy to have Jessie Madison as a more active character in this adventure. In Dark Transmissions she never gets to actually interact with any of the members of the Jinxed Thirteenth. In Syndicate’s Pawns, not only does she interact with them, she gets to pull off her own heroics and make friends as well.

DaV: Oh they are going to love the action in this one. It also helps that a vast majority of the cast in this book are women, from the heroes to the villains.

DJ: What was your goal when you began writing the A Tale of the Jinxed Thirteenth books? Is there a particular message or meaning you are hoping to get across to readers when the story is finally told?

DaV: Well at first it was just an exercise in finishing one book. I had come up with these characters and a vast universe to put them in, but there was no story keeping them together. I love stories of competent people with quirks and flaws, coming together to overcome obstacles. My initial goal was to just tell a solid well-paced action adventure sci-fi story. The more I plot out the series, and it is getting plotted out, the more I feel that the all-around message is becoming that if we can look past our differences to work together in cooperation there is nothing we cannot accomplish. We can celebrate what makes us the same AND what makes us different. I also wanted to avoid clichés of “the governments are all bad” and present a space opera of with more shades of grey and less broad strokes of black and white. Both the revolution and the Institution can do some pretty scummy things in the name of “the greater good”. That is the general all-around message I would like to have play out in these stories.

DJ: When I read, I love to collect quotes – whether it be because they’re funny, foodie, or have a personal meaning to me. Do you have any favorite quotes from Syndicate’s Pawn that you can share with us?

DaV: “I’ve been dead before Captain Morwyn. There is no other side. Only darkness.” This is a quote from Domiant, the main antagonist of Syndicate’s Pawns, which sums him up quite nicely.

DJ: Now that Syndicate’s Pawn is released, what is next for you?

DaV: Well I’m working on an outline for book three and four and am hoping to get another deal with HVI. They’ve been very happy with me so far and we’re in talks right now so I can’t really comment just yet. I’ve got eight books planned out for this series with a definitive ending in mind, ideally I’d love to have them done with HVI, I’ve been happy with them thus far. I’m also presently working on my first film “DEADSHACK” which will be going into production this November. I’m also working on two more screenplays for some horror film projects. My business partner Phil Ivanusic (we co-created the League of Super Evil together) are working on other animated television projects. In essence once Syndicate’s Pawns is released I want to keep on writing. This is my passion and I LOVE storytelling and I’m constantly trying to outdo and improve myself.

DaV: Please anyone who reads my books, feel free to reach out to me, I love feedback and comments and want to engage with my readers and fanbase. I’d also like to thank everyone who has bothered to read my books, you are helping me live my dream. From the bottom of my heart, thank you for your love and support.

DaV: You are more than welcome thank you for giving me this opportunity.

*** Syndicate’s Pawns is published by Harper Voyager Impulse and is available TODAY!!! *** 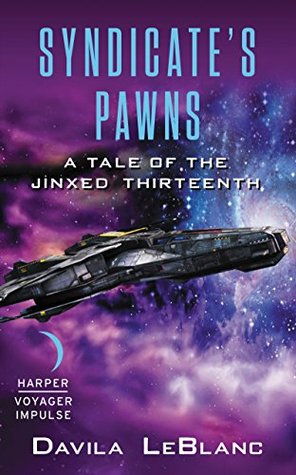 A month has passed since the eclectic crew of the Covenant Patrol vessel Jinxed Thirteenth endured a harrowing mission on the abandoned space station of Moria 3 and rescued its sole surviving crew member. During the mission, Moria 3’s deranged AI all but crippled the Jinxed Thirteenth, and the skeletal crew is now desperately trying to get it repaired.

Waking from several millennia of cryo-sleep, Jessie Madison’s worst fears are confirmed. She is the last surviving member of the Human race. Surrounded by the descendants of mankind in a world she knows nothing about, not even the basic alphabet, Jessie finds herself only able to communicate with the ship’s medic, Marla Varsin, and its translator, Machina Chord.

When the merchant vessel Althena arrives on the scene, its captain, a shrewd trader named Domiant, offers to sell Captain Morwyn the parts he needs. As guards are lowered on the Jinxed Thirteenth and repairs get underway, it becomes evident that a cunning foe has managed to infiltrate the ship. A deadly game of deception begins to play out, with a sinister foe setting its sights set on capturing Jessie. Captain Morwyn Soltaine, the crew of the Jinxed Thirteenth, and Jessie Madison find their mettle tested as they are dragged into a desperate battle for survival.

Davila LeBlanc spent his college years studying print journalism but quickly found himself working as a writer and performer in the comedy circuits of Montreal. During this time his goal became to break into the world of professional writing. He would get his first opportunity when

he co-created and sold the hit animated television series: “The League of Super Evil. ” This was his first foray into the world of production and an important first step on his road to becoming a writer.

After working on various television shows, in 2013 Davila decided to take a year off from children’s animation to focus on writing his first novel: “Dark Transmissions”. He is an avid reader of science fiction and fantasy and wants to add his own voice to the genre that inspired him. Davila currently resides in Ottawa where he is working on several other writing projects.