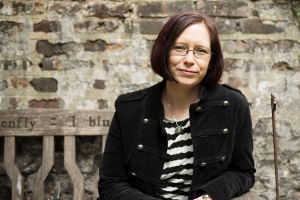 Jen Williams lives in London with her partner and their cat. She started writing about pirates and dragons as a young girl and has never stopped. Her short stories have featured in numerous anthologies and she was nominated for Best Newcomer in the 2015 British Fantasy Awards.

You can find Jen online at her website:sennydreadful.co.uk, on Twitter @sennydreadful and onFacebook.

As a fantasy writer, I have a certain fondness for monsters and beasties and mythological creatures. I’m rarely happier than when I’m giving my characters griffins to fly on, or giant spiders to fight, but there is something particularly pleasing about a dragon – in my humble opinion, most things can be improved with dragons. Here are a few reasons why I think they are indispensable:

1 Dragons are everywhere, and we need them. Whether it’s fighting good old Saint George (I suspect most fantasy writers grow up feeling that we really needed to hear from the dragon’s point of view in that particular story) or being an integral part of Chinese mythology, dragons pop up everywhere in our culture. There’s clearly a big dragon-shaped hole in the human soul, and we seek to fill it, wherever or whenever we are. There are some stories, and some ideas, that are just too appealing to ever let go.

2 They are your ultimate big bad. In the Copper Cat books, Y’Ruen is a god of destruction who also happens to be dragon-shaped because, really, what’s the easiest and most efficient way of causing lots of destruction? Yep, being a giant fire-breathing lizard with a healthy disregard for health and safety. In The Hobbit, Smaug is a legend of doom and fire, a genuinely terrifying presence and a nasty piece of work. In the videogame Dragon Age: Origins, you play a character who has united warring factions, faced down werewolves and wrestled darkspawn, but when you face the Archdemon at the end of the game (in the form of a dragon, of course), you know you are in some very serious trouble.

3 If you’ve got a dragon on your side, you’re in pretty good shape. Your enemy might have armies and wily advisors and maybe a few squishy mages, but if you’ve got several tons worth of muscle, scales and flame-on-demand on your side, you know your rival will be experiencing peak squeaky bum time. Look at Daenerys Targaryen in A Song of Ice and Fire – wherever you happen to be in the story, whether you’re a lover of the TV series or the books or both, it’s pretty clear Dany is going to be serving up some crispy-fried Lannisters at some point.

4 Dragons are hoarders. I don’t know about you, but as I look around my cramped flat, rammed to the roof with books, Star Wars toys, Lego and plastic dinosaurs, I can relate to that. And of all the things to hoard, gold and jewels are pretty useful (more useful than, say, my growing collection of odd socks or the stack of Garbage Pail Kids cards I’ve still got in a drawer somewhere, stolen from my cousin).

5 Speaking of dinosaurs… we know why we love dragons really, don’t we? The deepest part of our DNA, the part that links back to the tiny, furry, perpetually terrified creatures we used to be, remembers what its like to share the earth with something huge and leathery and hungry. I think it’s entirely possible that those mammals that are our ancestors, shivering and cowering in their burrows, looked at those thundering lizards and saw gods.

*** The Copper Promise is published by Angry Robot Books and is available to purchase TODAY!!!! **** 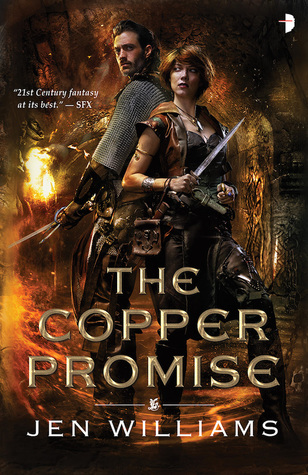 There are some tall stories about the caverns beneath the Citadel – about magic and mages and monsters and gods.

Wydrin of Crosshaven has heard them all, but she’s spent long enough trawling caverns and taverns with her companion Sir Sebastian to learn that there’s no money to be made in chasing rumours.

But then a crippled nobleman with a dead man’s name offers them a job: exploring the Citadel’s darkest depths. It sounds like just another quest with gold and adventure … if they’re lucky, they might even have a tale of their own to tell once it’s over.

These reckless adventurers will soon learn that sometimes there is truth in rumour. Sometimes a story can save your life.

3 thoughts on “Guest Post: Dragons are Cool by Jen Williams”