The Bastard Read-Along is being hosted by Kaja @ OfDragonsAndHearts and myself. If you are interested please comment down below with your name or like to your review if you have written one, and we will add your name to the list of bastards. We would love for you to join us and read along! 🙂 However, you don’t have write a review to participate. Fell free to just read the books, and then comeback and read everyone’s review and join in on the discussions 🙂 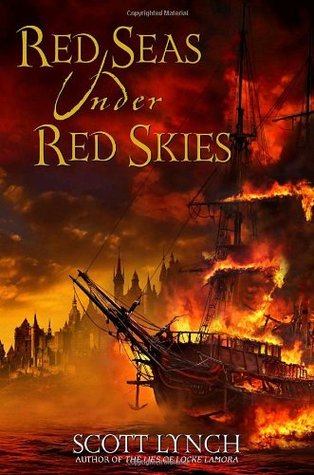 Still very good, but it was… different…

Shortly after I read Lies of Locke Lamora (my review) I had to add it to my all-time favorite list (which is a very exclusive club). The book was that good, and I loved it THAT much. Obviously I was very excited to read Red Seas Under Red Skies, but I was also a little hesitant because of how it ended… I thought the next book might ended up being different, because of that.

Locke and Jean are now on Tal Verrar and have running a con for around 2 years now are finally ready to close the deal. This time their target one of the most powerful man of Tal Verrar, and owner the Sinspire, Requin. If they are able to pull this off, they will have money they could have ever imagined and can leave this life and go away for ever. However, they have a past from Camorr and a reputation, and both close in on them.

Soon Locke and Jean find themselves no longer gambling in a casino, but in a meeting with Maxilan Stragos, that puts them captain of a ship and pirating crew, and once again, Locke will have to lie, cheat, and steal in order for him and Jean to even live to see a chance at going back to Tal Verrar to complete their original con.

The difference I was alluding to earlier was the lack of characters – the lack of the gentleman bastard characters. What happened to the crew was perfect – SO PERFECT – for Lies, but I didn’t know how a story would be with only Jean and Locke. And, as I thought, it did feel different. Not bad by any means, but different.

Locke’s and Jean’s characters both developed an incredible amount more in this book. One thing I loved in the last book, was here for a brief time in this book, were this after chapter interludes. In Read Seas Under Red Skies, they are used to detail the events from the end of Lies to how they got to island of Tal Verrar. This, I thought was incredibly crucial to the story for multiple reasons. The prologues comes from a section later on these story (cut and paste) where Jean turns on Locke! Sounds ludacris, right? But after you read those end chapter interludes, you may start to think it’s possible… and then once you put that into the mix of the current plot and the mess that Jean how gotten them into now… well, you may not be surprised…

AND WHAT A MESS Locke got them into now. The plot this time is much more complex, going heavy into the con at casino, but goes more toward action and different kind of scheming when we get to the pirates. Actually, this book felt like two completely different plots. At the start we have the Sinspire con, and we go into a good depth about that, and with out Hawk-friend from last time. But then when meet Stragos, and next thing I know, the whole Sinspire plot is forgotten, and suddenly we are all about pirates! Part of me liked how the story took a sudden and went out to sea (literally), but the other part me was really enjoying the con at the casino and wanted that to keep going on.

Obviously Locke and Jean are great, but we also meet some female pirates out at the sea this too 😉 Worldbuilding is top-notch  (wait until you hear what the Sinspire looks like); prose and vocabulary are among the best out there (of course); and this book has an emotional punch that felt like I took a Wicked Sister in the head! (And, coincidently, I read this scene while in public at Starbucks and had to try my best not to cry…. they must think I’m so weird) XD

I don’t think this book was worse that Lies, it was just different. Not sure if it was change in cast of characters, how the characters themselves changed here, the type of story, or changes in plot, or what – but something was off for me here?  And liked the style of Lies better.

Now, some people may this better one better; others maybe in my camp. But regardless, you will like this book.

Fellow Bastard’s Reviews of The Lies of Locke Lamora: