Jon Hollins: Quite alright. Thanks so much for having me. As for who I am, I’m officially a pseudonym, which means that I can’t give too much away without discarding my seductive cloak of secrecy and shadow. (Could I also be James Patterson slumming it…? No. No, unfortunately I could not). However, I can reveal that I’m a dad, a gamer, and a lifelong sf and fantasy nerd. I’m also an English transplant to Long Island’s sunny shores. Tantalizing clues, I know.

DJ: What is The Dragon Lords: Fool’s Gold about?

JH: I think the shortest summary I can give is “idiots making poor decisions.” More satisfyingly, it’s the story of a farmer, a vicious mercenary, her lizard-man companion, a mage in denial of her powers, and a village drunk attempting to steal a large amount of gold from a dragon. Of all the things that go wrong for them, the worst is probably that they succeed.

DJ: What were some of your influences for The Dragon Lords: Fool’s Gold?

JH: Fool’s Gold is essentially a heist story, or more accurately, a story about a series of heists. As such, Ocean’s 11 became a strong influence, perhaps not in a direct way, but because it lays out the formula of a heist so clearly. Playing with that formula, and riffing off it in different ways was one of the great pleasures in writing the book. Then layered onto that model are all the big epic fantasies I love when I was a kid… the Dragonlance Chronicles, the Hobbit, and Memory, Sorrow, and Thorn. Obviously the genre has taken a lot of strides since those books were written, and I definitely wanted to bring a modern, progressive feel to the story, but I also wanted to have an old school vibe thrown in—that feeling of a group of friends just going off and having an awesome adventure.

DJ: What is the universe for the Dragon Lord trilogy like?

JH: The series, The Dragon Lords, takes place in the world of Avarra, which is a fairly diverse place. However, Fool’s Gold specifically focuses on the country of Kondorra. The rest of Avarra will be explored in subsequent volumes, but for the first book, I really wanted to ground people in one specific locale. Visiting any new world in fantasy means a lot of new information to take on board, and I didn’t want to overwhelm anyone (or myself for that matter). Kondorra itself, is a fairly pleasant place, temperate, and largely rural. There’s very little war or crime. That, though, is because of the one slight drawback Kondorra has. No one, after all, wants to start a war with a country ruled by dragons. The dragons who rule Kondorra swept in and took over about thirty years ago—nobody is quite sure where from (again, subsequent volumes…) especially considering they were previously believed extinct in Avarra (no really, subsequent volumes). But they came in, kicked out the feudal rulers, and established themselves as the de facto powermongers. Now they employ a large number of people with dubious moral compasses to keep the population in line and collect exorbitant taxes. Aside from that, the most notable feature is probably the divine pantheon, which I based on the worst aspects of the Greek pantheon. They’re petty, capricious, and primarily interested in having sex with mortals. They’ve also largely abandoned Kondorra, but their role increases rapidly over the… wait, have I mentioned the subsequent volumes?

JH: The book gives readers a look at the story from the perspective of five main characters. We first meet Will, a local farmer who loses his livelihood to the corrupt policies of his local dragon overlord. Will is our everyman, so I think he’ll be the way in for a lot of people. But of all the characters he’s the most familiar with Kondorra and with the dragons, so he acts as our guide as well. Plus his moral compass is relatively functional compared to some of the people he ends up associating with, which is helpful. Aiding him and abetting Will in his search for revenge, are Lette and Balur, a pair of mercenaries. Lette is very, very good at stabbing people, but she’s looking for a way out of her current lifestyle. She wants to do something which poses fewer health hazards both to herself and the people she meets through work. Right now, her best guess for how she’ll achieve that is a stack of money the size of a small city, so robbing a dragon is quite appealing to her. Her companion, Balur, is less interested in changing his ways. He’s an eight-foot tall lizard man and his hobbies include drinking heavily and hitting things in the face. Also along the way they stumble into Quirk, a professor of thaumatobiology from a distant university. It also turns out that she’s also a mage, but one in denial of her powers. She’s generally far more interested in studying and learning about dragons than she is in stealing from them, which puts her at odds with the rest of the group. And then finally (so very finally) there is Firkin, who was once something of a father figure to Will, but who is now just a very rude drunk.

DJ: What was your goal when you began writing the Dragon Lord series? The Dragon Lords: Fool’s Gold is only the first book of three, so the series is obviously not complete yet, but is there a particular message or meaning you are hoping to get across to readers when the story is finally told?

JH: My primary goal with any book is always just to tell a good fun story. That’s the price of entry. If I’m not doing that, then I feel like I’ve failed. That said, it’s always nice if I can layer in some additional questions or ideas to explore. However, what I think a story is going to be about, and what it ends up being about are often the same thing. In this case I originally wanted to explore ideas of power and corruption, and the role of money in our power systems. That’s still in there somewhere, but I think the books became more about power, and leadership, and responsibility, and how you navigate your own role through those forces. I think unconsciously (though perhaps predictably) a lot of the things I’m trying to negotiate as an adult and father in my mid-thirties leaked into the book. As to an actual message about those ideas… if I ever figure one out, I’ll probably put it into the books, but that’s a very big if.

DJ: What was your favorite part about writing The Dragon Lords: Fool’s Gold?

JH: The characters. Meeting them, learning about them, finding their voices and channeling them. I always plan out the events of my books to a fairly high degree, but I never plan out the characters. I let them feel their way through events. And I find there’s a lot of the joy of discovery in doing things that way. Also, the goal of the book is to write about a group of friends. They may see eye-to-eye only rarely, and they may give each other a tremendous amount of sh*t, but they are at some base level having fun together. If they’re having fun, I’m having fun.

JH: That’s always incredibly difficult for me to answer. I think any act of reading becomes a collaboration between the author and the reader. The reader does so much of the imaginative work based on what I’ve put on the page, and I can only ever know what I’ve brought to the equation. That said, I guess, what I’d like people to be talking about would be the vast number of Hugo nominations they’re going to pour upon me the humor in the book. I think it’s something that separates it from a lot of the other epics on the shelves. A lot of fictional folk have fought dragons, but I don’t think many of them have announced that they plan to do it through the medium of dick punches.

Yeah, they’re probably going to talk about the profanity, aren’t they?

DJ: What is that one thing you’d like readers to know about The Dragon Lords: Fool’s Gold that we haven’t talked about yet?

JH: That it didn’t happen in a vacuum. No book does. Well, that’s a sweeping generalization, but I suspect very few books do. This is a book that has been read by writer friends, by my wife, my agent, my editor, and by my copyeditor. It’s benefitted from artists, map-makers, and art directors. A ton of people at Orbit have worked incredibly hard to help me make this book the best book I can write, and to give it the best chance it can have. I think it’s important to acknowledge them, and my gratitude to all of them.

JH: This is the point, where I could take the high road, and try to pass myself off as one of those classy writers, but… well, the book is being translated into Russian and German, and I honestly cannot wait to find out how the Germans say, “Stop this. Before I take whatever passes for your manhood and cram it so far down your throat you end up sh*tting your own balls.” That’s the sort of author I am really.

DJ: Now that The Dragon Lords: Fool’s Gold is released, what is next for you?

JH: Right now I am hard at work on the sequel, False Idols. Hopefully everything will seem like it’s been tied up pretty neatly by the end of Fool’s Gold, but I promise that there are plenty more of situations where Will and the crew will make really terrible decisions about the best course of action.

JH: Just thank you for having me here. I hope people enjoy the book and find it an inspiring way to force German translators to say really rude things.

*** The Dragon Lords: Fool’s Gold is published by Orbit and is available TODAY!!! *** 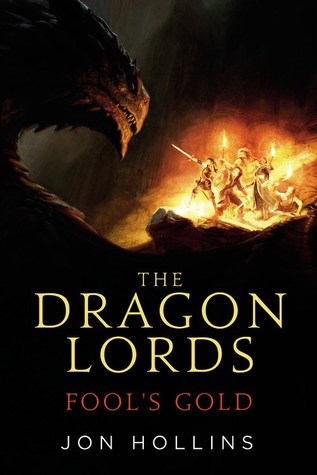 Guardians of the Galaxy meets The Hobbit in this rollicking fantasy adventure.

It’s not easy to live in a world ruled by dragons. The taxes are high and their control is complete. But for one group of bold misfits, it’s time to band together and steal back some of that wealth.

No one said they were smart.

Jon Hollins is a pseudonym.