Today I am interviewing R.V. Johnson, author of the stunning epic fantasy novel, Beyond the Sapphire Gate, first book in The Flow of Power series. A fast-paced romp in the vein of Piers Anthony’s Robot Adept Series as one fan put it.

DJ: Hey R.V.! Thanks for stopping by to do this interview!

R.V. Johnson: When I’m not writing or on social media, I read. I’m that someone who has a book with him, even while camping and hiking in the great outdoors. Outside is where I like to spend the rest of my free time, in the forest, at the lake, and rock climbing in the desert. And, let’s not forget sport off-roading. Four wheel drives and ATVs are a blast.

DJ: What is the Beyond the Sapphire Gate about?

RVJ: Coming into her power, Crystalyn unintentionally opens a curtain of darkness between a pair of sapphire obelisks with a travel symbol. Her younger sister Jade, the one person she cares most about having raised her since their mother went missing touches the gateway, and vanishes. Crystalyn follows, developing her powers in a land where strife, warfare, and magic use are rampant. The search grows ever desperate as she learns each symbol use is killing her. Though a political Circle of Light of magic users and an ominous Dark Citadel of warlords and their dark creations block the way, she must go on. Time is fast flowing away from both her and Jade’s well-being with far more at stake than they both know.

DJ: What were some of your influences for the Beyond the Sapphire Gate and The Flow of Power trilogy?

RVJ: If you mean authors, there were many, a lifetime of them. Those that come to mind first are Robert Jordan’s The Wheel of Time Series, David Eddings The Belgariad series, Margaret Weiss and Tracy Hickman, The Dragon Lance series, and of course, J.R.R. Tolkien’s Lord of The Rings, which still happens to be my favorite movie adaptation of a book. The Hobbit version didn’t do it for me.

DJ: Could you briefly tell us a little about Crystalyn, Jade, and their father Garn? Do they have any cool quirks or habits, or any reason why readers with sympathize with them?

RVJ: Crystalyn has what she terms as a mind affliction, her thoughts, emotions, and actions can sometimes get unpredictable. As a trained med tech, she knows what is happening to her and takes meds for it. Even so, she still has bouts of anger, which incidentally, work well with her symbol magic, boosting her strength.

Nurtured all her life, Jade is somewhat naïve, so it’s quite a shock when dark things are drawn to her for her unique ability of reading a living being’s aura, the life essence that rotates around them. She has to learn to fight back unconventionally, or succumb.

DJ: What is the universe of Astura and Terra of The Flow of Power series like?

RVJ: Two vastly different worlds. One is dying from technological overuse promoted by a king and his administration, the other a lush vibrant world with natural and unnatural creatures as deadly as the people who dwell there, ruled by Dark Lords, monkish democracies, and political circles of magic Users.

DJ: From the book’s info first line, “Some magic should remain untouched,” and then talking about the “Dark” and “Light” Users manipulating “The Flow” you make it very obvious that magic is going to be a strong element in this story. Can you explain what your magic system is? Where did you get the idea for it?

RVJ: On Astura, the Users of magic interrupt a great raging river of power known as the ‘Flow’ underlying the land. Except Crystalyn, from a different world, her magic is invoking complex symbol patterns for varying effects. It’s a concept I’ve had in mind for two decades. The story evolved from it, and the power Users who use the energy four and half seasons ago.

DJ: What was your favorite part about writing the Beyond the Sapphire Gate?

RVJ: Crystalyn’s healing type symbol magic and her inability to control herself much of the time, Jade and Lore Rayna’s unique abilities, and Garn’s prowess with weapons.

RVJ: The characters, many readers have mentioned a favorite character, good and bad.

DJ: What was your goal when you began writing The Flow of Power series? Beyond the Sapphire Gate is only the first book of several, so the series is obviously not complete yet, but is there a particular message or meaning you are hoping to get across to readers when the story is finally told?

RVJ: Beyond the Sapphire Gate came about because of my dissatisfaction with a lot of today’s fantasy. Too many seemed to follow the same formula, I crave an immersion in a new world, an empathy with a character, even when that personality doesn’t do what you think they should do. I hope to instill a sense of wonder for the people, places, and alien things described.

DJ: When I read, I love to collect quotes – whether it be because they’re funny, foodie, or have a personal meaning to me. Do you have any favorite quotes from Beyond the Sapphire Gate that you can share with us?

RVJ: “One of these times, I’m going to relieve him of his good eye, then stand him near a cliff and enjoy watching what happens next.” That one may only appeal to the brash at heart, but I like it, as well as, ‘A war could be a significant deterrent to finding her sister’. A personal favorite: “Fear is an unproductive emotion. It doesn’t aid blood flow, it doesn’t clean tear ducts, and it doesn’t increase euphoria. Therefore, it’s useless. Succumb at your own detriment.”

DJ: Now that Beyond the Sapphire Gate is released, what is next for you?

RVJ: Beyond Terra a novella in The Flow of Power was released January 2016, the second book of the series is due out in early fall of the same year. Along with those, I have a science fiction novel in the works and some thoughts for a nonfiction book or two.

There is a reader’s group setup at http://www.authorrvjohnson.com

Signing up there will get you Beyond Terra free.

RVJ: Thank you for your interest DJ, I had fun!

DJ: Glad you had a good time! Thank you so much for answering my questions! It was great having you on 🙂 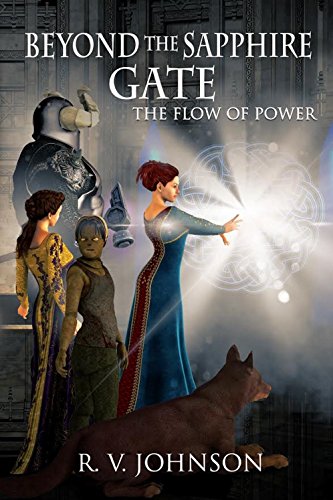 Coming into her power in adulthood, Crystalyn activates a curtain of darkness between a pair of sapphire obelisks with a travel symbol. Her younger sister Jade, the one person she cares most about having raised since their mother’s disappearance, touches the gateway and vanishes. Crystalyn follows, developing her strength in a land where strife, warfare, and magic use are rampant.

The search for Jade grows ever desperate as Crystalyn learns each use of magic is killing her, her mind deteriorating. Though a political Circle of Light made up of mystic users, a Dark Citadel of warlords, and a Hundred Season war block the way; she must go on.

Time is fast flowing away from both her and Jade; with far more at stake than they both realize.

R.V. Johnson grew up in Utah wandering through beautiful tranquil forests, exploring the unique alien-like setting of the red rock desert, and climbing the rugged trails of the high Uinta Mountains where mountain goats roam. Indoors, he read from his large library or wrote in his journal.
One can now find him writing and reading outside.