DJ: Hey Beth! Thanks for stopping by to do this interview!

Beth Cato: Thanks for having me by! I sum myself up as author, baker, and geek. I write steampunk fantasy novels and have published short stories across a wide array of genres. I’m known for my food blog, Bready or Not, with new posts every Wednesday. My evil cookies attract a lot of attention. I’m also an abashed geek with a deep love of old school role-playing video games, books, and the Great British Baking Show.

DJ: What is the Deep Roots collection?

BC: Deep Roots gathers three short Clockwork Dagger works that were originally published, separately, as ebooks over the last year and a half.

DJ: I really enjoy it when authors write short stories set in the same world of their series, but sometimes it can bother me that I can only read them via ebook, or that they are part of another anthology. I always wish I could have them all together! Was this a request you heard from you readers? What made you want to have all these stories together, in a single collection?

BC: The biggest thing about Deep Roots is that this is the first time any of these works has been in print. Some people didn’t even care about them being together–they just wanted them in paperback, period! Now that the stories are available together, I hope it was worth the wait.

DJ: Could you tell us a little bit about each of the stories in this collection?

BC: The Deepest Poison is set before my first book, The Clockwork Dagger, and casts my novel’s heroine as the goody-two-shoes antagonist in a murder mystery in an army encampment. Soldiers are falling deathly ill from poison and my characters are in a race to find out how and why before the enemy can take advantage.

Wings of Sorrow and Bone is my novella follow-up to my second book, Clockwork Crown. It was a Nebula Award nominee this year. My one-line pitch for it is “Girl power and gremlins,” because it really comes down to two young girls, with no magical powers, using their wits to battle a powerful politician/ scientist so that they can save gremlins from foul experimentation.

The last story, Final Flight, is also set after Clockwork Crown. It picks up the story of a character from my first book, Captain Hue of the airship Argus, as his ship is commandeered by a Clockwork Dagger on a perilous mission.

DJ: For fans of your Clockwork Dagger series, what can they expect to find is these stories? What do you think readers like most about this collection after they finish it?

BC: Readers can expect deeper insights into minor characters like Miss Percival, Tatiana, Rivka, and Captain Hue. I think it was especially important for some difficult characters like Tatiana to have a chance to develop more. After all, most antagonists think they are the heroes of their own stories. It doesn’t mean that these characters become likeable, per se, but you can understand more of where they come from. I certainly came to a greater understanding of them by seeing through their eyes; I hope readers experience that, too.

DJ: What made you first want to write short stories for your series?

BC: The Clockwork Dagger books tell the main story in two books, but there were various odds and ends that I wanted to resolve. I especially wanted to tell Rivka’s story and to find a way for her to safe the gremlins, though I had no idea how she would accomplish that!

DJ: Some readers may not have started the Clockwork Dagger series, so is it possible to read any of the stories in Deep Roots without having started the series yet?

BC: Yes. I wrote each story to stand on its own since they were being sold as individual ebooks. That said, if readers are spoiler-sensitive, I do advise that they start with the novels. On my website, I have a recommended reading order for the books and stories.

DJ: For those who haven’t started your Clockwork Dagger series yet, what is the series about and what is the world like?

BC: The series isn’t set on Earth, but on a fantasy world that is inspired by World War I Europe. The central setting is Caskentia, a kingdom that has been at intermittent war for fifty years. The people are in desperate straits: illiterate, often homeless, generations of men dead or maimed. Their technology is backward compared to the prosperous city-states to the south. As a result, Caskentia still relies more on the ‘quaint’ ways of magic. My heroine, Octavia Leander, is a profoundly gifted magical healer and physician who worships a world tree known as the Lady. After a truce is called, Octavia leaves the front lines of battle and sets off to found a new home. Her simple airship ride is plagued by bizarre incidents, and it’s soon evident that someone is trying to kill her. The first book is inspired by Murder on the Orient Express with a magical twist, and readers say that vibe comes across well.

DJ: Do you have plans to write any more short stories in the Clockwork Dagger series?

BC: None are planned at this time, but I’m open to writing more in this world! For now, though, my focus is on my new series that kicks off this month with Breath of Earth.

DJ: When I read, I love to collect quotes – whether it be because they’re funny, foodie, or have a personal meaning to me. Do you have any favorite quotes from any of the stories in Deep Roots that you can share with us?

BC: Wings of Sorrow and Bone features a friendship that is fraught with tension. At one point, Rivka tells Tatiana, “If I can befriend a chimera that can bite off my arm, I can be friends with you.” As for foodie quotes, that novella has a number of them that might entice you if you love maple–and on my site, I have the actual recipes for the dishes!

DJ: Before we go, what is that one thing you’d like readers to know about Deep Roots that we haven’t talked about yet?

BC: These stories aren’t just for adults. My novels have had readers from age 10 to age 85, and Deep Roots is just as accessible. My writing, in general, often goes to dark places, but profanity and graphic scenes just aren’t my thing.

*** Deep Roots is published by Harper Voyager and is available TODAY!!! *** 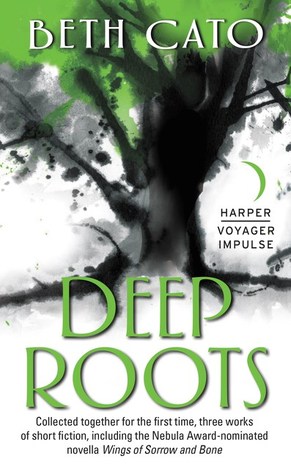 From the author of The Clockwork Dagger and The Clockwork Crown comes a compilation of short works set in the same world: The Deepest Poison, Final Flight, and the Nebula-nominated Wings of Sorrow and Bone.

Octavia Leander, a young healer with incredible powers, has found her place among Miss Percival’s medicians-in-training. Called to the front lines of war, the two women must uncover the source of a devastating illness that is killing thousands of soldiers.

WINGS OF SORROW AND BONE

After being rescued from the slums of Caskentia, Rivka Stout is adjusting to her new life in Tamarania. But when Rivka stumbles into a laboratory run by the powerful Balthazar Cody, she also discovers a sinister plot involving chimera gremlins and the violent Arena game Warriors.

Captain Hue hoped he was rid of his troubles once Octavia Leander and Alonzo Garrett disembarked from his airship, but then the Argus is commandeered by a Clockwork Dagger and forced on a deadly mission. Hue must lead a mutiny that might bring down his own ship…. perhaps for good.

Beth Cato hails from Hanford, California, but currently writes and bakes cookies in a lair west of Phoenix, Arizona. She shares the household with a hockey-loving husband, a numbers-obsessed son, and a cat the size of a canned ham.

She’s the author of THE CLOCKWORK DAGGER (a 2015 finalist for the Locus Award for Best First Novel) and THE CLOCKWORK CROWN (an RT Reviewers’ Choice finalist) from Harper Voyager. Her next book, BREATH OF EARTH, is out in August.