DJ: Hey Lavie! Thanks for stopping by to do this interview!

Laive Tidhar: My pleasure! Thanks for having me.

DJ: Your work has spun everything from the more light-hearted adventures of The Bookman Histories to political noir explorations of current and alternate realities in the Jerwood Fiction Uncovered Prize winner and Premio Roma nominee A Man Lies Dreaming, to the World Fantasy Award winning Osama. How do you move between genres and modes of writing like this, and what do you look for in a project before you sit down to start?

Lavie: That’s an excellent question, as I’ve been thinking a lot about this myself recently. There’s a certain register shift between writing something like The Bookman, which is very much in the manner of, almost like a serial, a lot of things happening, you know, from secret catacombs to mechanical assassins to pirates, all coming at you! – and then to something like, say, my recent novel, Central Station, which is almost plotless, that is a much slower, gentler slice-of-life science fiction, I’d call it. And from that to the dark comedy of something like A Man Lies Dreaming. I guess moving between these keeps me interested – it would be terrible to only write the one book over and over – and actually this is also seen in the three Bookman Histories novels, each of which is really in a different genre – adventure, crime, and spy respectively. While all taking place in this mad sort of Victorian era that never was. What I look for, though, is a sort of… I need to be able to have something to say, that the book must be more than just a story, it needs to have a certain weight (if only for my own satisfaction). But I’ve been doing very complex novels recently, in a structural sense, in a sense of voice or whatever, and I’m increasingly being drawn back to the more story-telling mode of The Bookman Histories. We’ll see!

DJ: The Bookman Histories is a loose trilogy of adventures set in a complexly-realised alternate Victorian era filled with sentient automatons, alien lizards, exploding books, and real authors and their fictional creations. Is it true to say this is an early example of your interest in metafiction – and how do you think it has been received?

Lavie: It is, yes – with The Bookman, I very much wanted to write a book about books, a book that is almost aware of itself as a book, if that makes sense. As an artifact. I think it’s better received now, to be honest, than maybe it was initially with The Bookman. A lot of my novels – Osama is an example – play these sort of textual games, but in The Bookman it’s more of a fun romp, just a way of having all my favourite authors and their characters passing through. I know it’s irritated some early readers, and I guess it depends on what you like in a book! To me as a reader, I love spotting the little throwaway references – and ideally, if you don’t, it shouldn’t really intrude on the story itself.

DJ: What were some of your influences for the novels?

Lavie: Well, everything, to a very large extent. I loved the work of Tim Powers and James Blaylock, and what Kim Newman did with his Anno Dracula series, stuff like that – and then, of course, all these great Victorian novels and stories. I liked the idea that you can use anything and everything.

DJ: The books are designed to be more or less stand-alone, but do you think people should necessarily read them in order?

Lavie: You know, that’s a good question. I’d say that, just like there are people who read anthologies from front to back, in order, and others dip in and out at random, you can read them in either way. I am personally very fond of the second one (Camera Obscura) which goes down the noir route a bit more, but that’s a personal preference. I think the third one is very gonzo, and the first is more of my attempt at a sort of love letter to the old Victorian novels. So either way works for me!

DJ: Which is your favorite character in the trilogy?

Lavie: I have a soft spot for Milady de Winter, in Camera Obscura. And for Tom Thumb. I also enjoyed writing Smith, the retired spy, in The Great Game. And if I ever do go back to this world, I think Mr Spoons, the pirate, would definitely reappear!

DJ: Is it true you that you wrote each of the three novels in a different country?

Lavie: That’s actually true! I wrote The Bookman in London, Camera Obscura while living in Vientiane in Laos, and The Great Game mostly, I think, in Tel Aviv in Israel. So it’s been quite an interesting period…

DJ: What was your favorite part about writing the Bookman Histories?

Lavie: I might have to say, finishing it! I never set out to, or even imagined I would, end up writing 1000 pages – ONE THOUSAND PAGES! I mean, can you imagine? So that was just a huge chunk of time that I spent in that world, and there’s a real sense of – wow, did I really do that? There’s something weirdly satisfying about that. And then, also, I do love the new editions. And it’s nice when someone gets and likes the books, too. It makes you think it might have all been worthwhile!

DJ: The books originally came out in 2010-2013, and are now being reissued in new editions. How was reception to the books, then and now?

Lavie: Well, you know, it had lovely reviews in places like The Guardian, Locus, SFX… and the whole trilogy’s published in Japan, for example. From time to time I run into people who really liked the books, and that’s always nice! Obviously, Angry Robot felt quite strongly that the books deserved a second outing and, so far, response seems pretty good, so it’s lovely to be able to bring it into the hands of new readers.

DJ: I’m always curious when authors finish a series, how close to the original course they stayed when it is finally completed or if it ended up evolving and changing. Did the plot stay the same as you had first imagined it? How about the ending?

Lavie: It’s a good question. I had the overall arc in mind but I kept taking wrong turns and then having to go back and start again. It could be challenging at times. But overall, it was interesting to explore that whole arc, and the ending (as weird as it may be!) was pretty much the way I imagined it.

DJ: When I read, I love to collect quotes – whether it be because they’re funny, foodie, or have a personal meaning to me. Do you have any favorite quotes from the trilogy that you can share with us?

Lavie: I have a soft spot for the “nuns with guns” line in Camera Obscura…

DJ: What is next for you?

Lavie: Well, my latest novel, Central Station, is just out, and the Bookman Histories are all getting re-issued – I also did a small non-fiction book recently, called Art and War, with my friend, the Israeli poet and novelist Shimon Adaf. And A Man Lies Dreaming came out earlier this year in the US. So it’s been quite busy! I have a few new novels in the pipeline, so we’ll see!

*** The Bookman Histories trilogy is re-published by Angry Robot Books and is available TODAY!!! *** 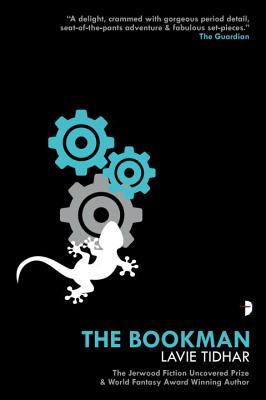 In a 19th century unlike our own, the shadowy assassin known as the Bookman moves unseen. His weapons are books; his enemies are many. And when Orphan, a young man with a mysterious past, loses his love to the sinister machinations of the Bookman, Orphan would stop at nothing to bring her back from the dead.

In The Bookman, World Fantasy Award winner Lavie Tidhar writes a love letter to books, and to the serial literature of the Victorian era: full of hair-breadth escapes and derring-dos, pirates and automatons, assassins and poets, a world in which real life authors mingle freely with their fictional creations – and where nothing is quite as it seems. 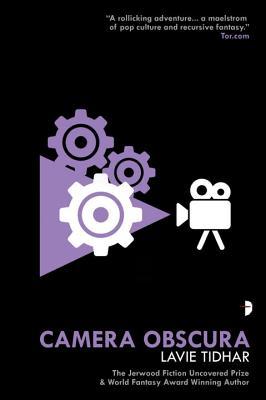 In the last decade of a 19th century unlike our own, Milady de Winter is called to the scene of an impossible crime. A gruesome murder on the Rue Morgue sets her against a ghostly serial killer, and on a voyage that leads from the catacombs of Paris to the wonders of the New World – where new horrors lie in wait.

In Camera Obscura, World Fantasy Award winner Lavie Tidhar combines the Victorian penny dreadful with exploitation cinema to create a wide-screen thriller of redemption: complete with mad scientists, secret societies, Shaolin monks and figures liberally borrowed from the literature of the era – as only he can.

Extra! Extra! Read all about it! For the first time, the 2016 edition also includes ‘Titanic’, a short story from the Lost Files of the Bookman Histories. 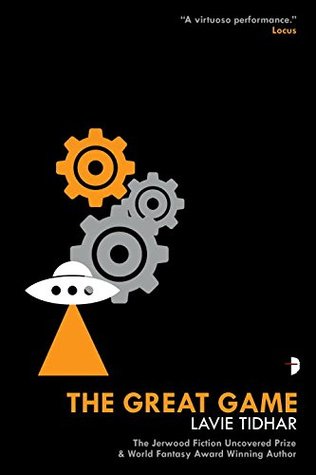 As a 19th century unlike our own comes to a close, Mycroft Holmes is found murdered outside his London club. It is up to retired shadow executive Smith to track down the killer – only to stumble on the greatest conspiracy of his life. Strange forces are stirring into life around the globe, and in the shadow game of spies nothing is certain.

In The Great Game, World Fantasy Award winning author Lavie Tidhar concludes his epic trilogy of a Victorian era that could never have been: filled with literary references galore, not to mention airship battles, Frankenstein monsters, alien tripods and death-defying acts. It is a world where nothing is certain – not even death.

And furthermore… venture deeper into the Lost Files of the Bookman Histories in this 2016 edition, as Professor Tidhar explores the ‘Dynamics of an Asteroid’!

Lavie Tidhar is the author of the Jerwood Fiction Uncovered Prize winning A Man Lies Dreaming, the World Fantasy Award winning Osama and of the critically-acclaimed The Violent Century. He has a British Fantasy Award for Best Novella for Gorel & The Pot-Bellied God.
Lavie’s first non-fiction novel Art and War: Poetry, Pulp and Politics in Israeli Fiction – co-authored with Shimon Adaf – was released through Repeater in March.