Today I am interviewing Peter Higgins, author of the new omnibus, Wolfhound Empire, a collection of the three books in the fantasy trilogy that began with Wolfhound Century.

Peter Higgins: You know those people you sometimes see sitting alone in cafés, scribbling in a notebook or hunched over a laptop? One of them’s me. Writer at work: no distinguishing features visible to the naked eye. Except that I favour the currently unfashionable denim shirt/jeans combo and hiking boots.

DJ: What is Wolfhound Empire about?

Peter: It’s a fantasy world that owes a debt to Stalin’s Russia, much like what Game of Thrones owes to medieval Europe (i.e., in some ways a lot, and in other ways not much at all). Where the plot of Game of Thrones is about ruling family rivalries, Wolfhound Empire is about murderous conspiracies and being on the run from the authorities. And in both stories there’s a huge crisis happening in the natural, magical, non-human world that’s shaping the characters’ lives, though they don’t fully understand it.

DJ: What were some of your influences for Wolfhound Empire?

Peter: The list of influences is very long! All the kinds of writing I love. It’s a mash-up of genres: a fantasy world with a thriller plot, and bits of SF, modernist art and historical fiction thrown in. Actually, I think the biggest influence of all is probably Gene Wolfe’s Book of the New Sun: although my writing and my world aren’t anything like his, in terms of style or subject, Gene Wolfe’s work – its ambition, its scale, its inventiveness – was my inspiration.

DJ: Could actually you tell us a little about the first book in the trilogy, Wolfhound Century, too? (Seeing as how this is where readers will be starting) 😛

Peter: The whole trilogy follows the rise of a man called Josef Kantor, who’s modelled (very loosely) on Stalin, and what happens in the world as he gets more and more power and control. In the first book, Wolfhound Century, Kantor is a revolutionary, gangster and terrorist, and the plot focuses on a woman called Maroussia, who Kantor is trying to have killed, and a detective called Lom who is trying to track Kantor down: and the story unfolds from there, taking the protagonists into a world of dispossessed aristocrats and dissident artists, and also of giants and sentient rain, golems and walking trees …

DJ: Could you briefly tell us a little about your main characters in the trilogy? Do they have any cool quirks or habits, or any reason why readers will sympathize with them?

Peter: For me, the main theme of the trilogy is the endless possibility of what an individual human is capable of, and how oppressive societies try to limit that and close that down. So what makes the characters compelling is not so much what they are to start with but what they become under pressure: how far they travel, what they discover about themselves and their world, what they find they are capable of and willing to do for each other. Can’t say too much about the specifics – spoilers! – but Lom and Maroussia go a very long way indeed.

DJ: What is the universe/world for Wolfhound Empire like?

Peter: In the continent of the Vlast everything is potentially alive. The rain. The rivers. The earth. The sky. In the city, workers marching through the streets, protesting. Vast cinemas that seat twenty thousand. Railway wagons the size of houses. Vampire-like creatures doing dirty work on behalf of the secret police. Intelligent shape-shifting wolves coming out of the endless forest in the east. Vicious interrogations in basements. Assassinations and wars. Propaganda broadcasts on the radio. Engineers developing new technologies in secret compounds. Drunken artists and dancers in cabaret clubs. Giants lumbering past hauling carts.

DJ: What was your favorite part about writing Wolfhound Empire?

Peter: Finding a way of writing that was open and fresh enough to put in everything I wanted to write about, all in a single book.

DJ: The trilogy collected in Wolfhound Empire was completed last year with the release of Radiant State – since then, what have readers been talking about most once they finished it? How have the reviews been from readers, bloggers, and reviewers?

Peter: There have been a lot of very thoughtful, extensive, insightful, engaged reviews. I couldn’t have hoped for better readers: it’s been great, but also daunting and humbling and a bit scary, to think there are people out there reading my work in the way I secretly hoped they might. I guess one theme that comes through in particular from what they say is that Wolfhound Empire is a bit different, a bit new: writing in a different way.

DJ: What was your goal in writing the trilogy? Was there a particular message or meaning you are hoping to get across to readers when it is finally told?

Peter: Not really a message as such: I was trying to create a new kind of fantasy world and an interesting way of writing about it. And in a way I was trying to find a way of engaging with a chaotic, crisis-ridden, endlessly varied moment in history, when a society moves from horse-drawn cabs to atomic power in much less than a single life-time. But as I’ve mentioned, I think there is a theme that runs through the whole of Wolfhound Empire: it’s about crossing frontiers, refusing to accept rules and categories; about how rich and varied and changeable an individual human’s perceptions, emotions and imagination can be, and how mythically vast the natural world is. And how horrific 20th century totalitarian regimes were, and how we really don’t want to go back to that ever again.

DJ: I’m always curious when authors finish a series, how close to the original course they stayed when it is finally completed or if it ended up evolving and changing. Did the plot stay the same as you had first imagined it? How about the ending? Evolution of your characters?

Peter: Now that I can look back on the completed story it astonishes me, because it is so big and the world is so extensive. I had no idea when I started that I was embarking on such a large-scale work. Wolfhound Empire as a whole traces the lives of its characters at a critical time, and also shows the story of a whole society, a country and a world that changes dramatically. To be honest, if I had thought it through at the beginning, I’m not sure I would have attempted such a big thing.

DJ: Having your whole trilogy being released as a single omnibus must be exciting! Was this something your fans had been asking for?

Peter: It works much, much better this way. Although I set out to write three separate books, the way they turned out was three sections of one continuous story, so it makes much better artistic and narrative sense to read them together, and regard them as one thing. One epic story. To me it feels like the finished work is whole and together at last. I’m hugely proud of it.

DJ: When I read, I love to collect quotes – whether it be because they’re funny, foodie, or have a personal meaning to me. Do you have any favorite quotes from Wolfhound Empre that you can share with us?

Peter: Rather than quote my own work, here’s the quote that started the whole thing rolling for me, and where I got the title from:

The wolfhound century is on my back –

But I am not a wolf.

It’s from a poem by the Russian poet Osip Mandelstam, who died in one of Stalin’s prison camps in the 1930s.

DJ: Once the Wolfhound Empire trilogy is released, what is next for you?

Peter: I’m working on something quite different but I don’t want to say anything about it, for fear of jinxing it!

Peter: Thanks for inviting me and asking the questions. It’s been a pleasure.

*** Wolfhound Empire is published by Orbit Books and is available TODAY!!! *** 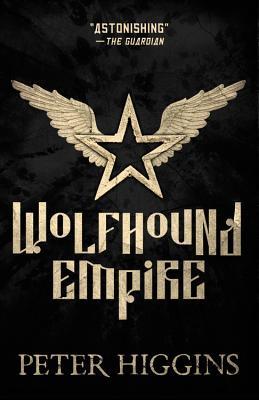 A spectre is haunting the empire–the specter of war.

Huge stone creatures have fallen from the sky, their bodies littering the countryside. Blood-hungry golems are used to fight a never-ending war for political power. Secret police crush insurgency wherever it’s found.

Investigator Vissarion Lom has been summoned to Mirrored to quell a new rebellion within the city limits. He’s been called because he’s an outsider. Because he isn’t enmeshed in the city’s politics. And because of the piece of stone embedded in his forehead..

Peter Higgins read English at Oxford University and Queen’s, Ontario. He was a Junior Research Fellow at Wolfson College, Oxford and worked in the British Civil Service. His short stories have appeared in Fantasy: Best of the Year 2007, Best New Fantasy 2, Asimov’s Science Fiction, Fantasy Magazine, Zahir and Revelation, and in Russian translation in the St Petersburg magazine Esli. He lives with his family in South Wales.