DJ: Hey D! Thanks for stopping by to do this interview!

For readers who aren’t familiar with you, could you tell us a little about yourself? (Or who you actually are?) 😉

D. Nolan Clark: Ha! Yeah, it’s a pseudonym. I’m actually David Wellington, the bestselling horror writer. D. Nolan Clark is what I call myself when I’m writing science fiction. I’m really excited to bring this book out—in some ways it’s the book I’ve been trying to write since I was six years old and I first saw Star Wars. I always meant to write science fiction, and in fact when I published my first novel (Monster Island) I thought I was writing sf. Of course, it had zombies in it, so it got put on the horror shelf.

DJ: What is Forsaken Skies about?

D. Nolan Clark: It’s about the Great Silence, the Great Filter, the Fermi Paradox. The question of why, in a universe full of planets capable of harboring life, we’ve never detected any. The book suggests one answer for that question. It’s also about a future where runaway capitalism and runaway militarism have left us in a very bad position to find out what happened to all the aliens.

DJ: What were some of your influences for Forsaken Skies?

D. Nolan Clark: This is one of those questions every author has trouble answering. You want to say “I have no influences, I have created this work entirely from my own imagination”. But of course that’s never true. We are all the sum of our influences. I’ve been reading sf since the 80s, so my influences go way back—there’s a little Heinlein in here, a little Frank Herbert. An awful lot of Larry Niven and especially Iain M. Banks.

D. Nolan Clark: That’s one of the elements I’m proudest of, here. The characters of Forsaken Skies really drove the story. Once I started imagining them they took on a life of their own. There’s Aleister Lanoe, the soldier who can never lose a war—even when he wants to. Bettina Zhang, the blind fighter pilot, and Caroline Ehta, scarred veteran of a dozen ground campaigns, a marine in a world where the average life span for marines is two weeks. Tannis Valk, horribly wounded in the last war, a giant in a space suit with an opaque black helmet. And lots more! It’s really an ensemble story with a ton of great, memorable characters. Why are they compelling? I think great characters come from great context—they need to feel like real people who could exist in their setting. Then you dial it up another notch, make them just a tiny bit larger than life. They’ll take you where you need to go.

DJ: What is the universe/world for Forsaken Skies like?

D. Nolan Clark: Well, it takes place over half a galaxy, so it’s not just one thing. Four hundred years in the future and humanity has spread to nearly a hundred planets through traversable wormholes. For all of our advanced technology, though, we’ve changed very little as a species. Transplanetary development monopolies—I call them polys—have taken control of every planet outside the solar system, and they run them to make a profit. Earth stays free only because of its Navy, a fighting force the polys can never beat. Which doesn’t stop them from trying. It’s been one war after another, and there’s too much at stake for the powers that be to worry much about individual human lives. The planet Niraya is right on the edge of nowhere, a tiny industrial colony that could only afford to about half terraform itself. Niraya is a land of dry canyons and deep craters full of oxygen-generating lichens, a place where it never rains and humans can barely breathe. Yet to the people who live there, the Elders and aspirants of the Transcendentalist Faith, there’s no place else to go. Which is a real problem when something from beyond the stars comes calling…

DJ: What can you tell us about this “unknown force” that is coming? Are they A.I.? Aliens? Another human race? What makes them dangerous?

D. Nolan Clark: Oh, I’m not giving anything away! I’ll say the threat isn’t human. But it isn’t what you’re expecting, either.

DJ: What was your favorite part about writing Forsaken Skies?

D. Nolan Clark: The whole process was a lot of fun. Just getting to write hardcore science fiction, to let myself geek out completely, was great. Learning about the characters, what they chose to show me, was incredible. The relationships between the various pilots and the colonists of Niraya led to some great drama even I wasn’t expecting. It’s always fun when a book feels like it’s writing itself.

D. Nolan Clark: The ending. There’s a twist. On which subject I will say no more.

DJ: What is your goal in writing The Silence series? Forsaken Skies is only the first book, but is there a particular message or meaning you are hoping to get across to readers when it is finally told?

D. Nolan Clark: I’ll let readers find their own meaning. There are messages but I didn’t want to hit anyone over the head with them—mostly I wanted the reader to enjoy the ride. The overarching theme of the series is about communication, about how we talk to other species but also the things we won’t say to each other, how impossible it can be to define the relationships that keep us alive, that make us stronger. If any of that comes through, great. If not, the readers will still have an entertaining experience.

DJ: When I read, I love to collect quotes – whether it be because they’re funny, foodie, or have a personal meaning to me. Do you have any favorite quotes from Forsaken Skies that you can share with us?

D. Nolan Clark: One of the characters, Auster Maggs, is pretty good for those. Here are his thoughts the first time he sees Niraya:

On the display the planet didn’t appear to be rotating at all. It hung there in its spherical immensity, silent and bright, while the twist of cloud turned with aching slowness, its shadow washing over those endlessly branching canyons, touching them with darkness then moving on without a sound.

The gathered pilots and Nirayans studied the world with a hushed intensity, all of them looking as if they wanted to memorize every detail of the surface. Maggs supposed it was hardly surprising. Even for veteran travelers, it wasn’t like you saw a new planet every day. The boy, Thom, floated by the display with his mouth open. The Nirayans watched it with their features hardened to masks of reverence.

Maggs drew his own conclusion. Bit of a pesthole, he thought.

DJ: Now that Forsaken Skies is released, what is next for you?

D. Nolan Clark: As you mentioned, it’s a trilogy. There’s plenty more of this story to tell—and it’s going some pretty amazing places. After that? I’ve got about twenty books in my head, ready to go. There’s lots more to come.

DJ: Before we go, what is that one thing you’d like readers to know about Forsaken Skies that we haven’t talked about yet?

D. Nolan Clark: Just thanks! Thanks for this chance to talk about my book, and thanks to all the advanced readers who have read Forsaken Skies and said such nice things about it!

*** Forsaken Skies is published by Orbit and is available TODAY!!! *** 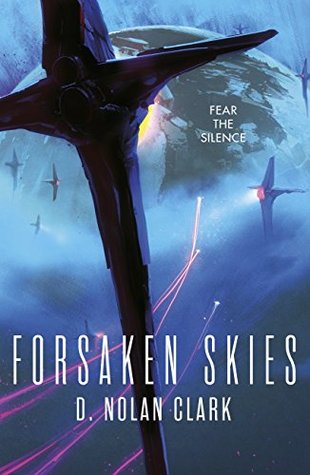 Commander Lanoe is one of the Navy’s greatest heroes, but the civil war left him with nothing but painful memories. When a planetary governor is murdered, it falls to Lanoe to hunt down the killer and bring them to justice.

Yet his pursuit will lead him towards the greatest threat mankind has ever faced.

An unknown armada has emerged from the depths of space, targeting an isolated colony planet. As the colonists plead for help, the politicians and bureaucrats look away. But Lanoe has never run from a fight and he will not abandon thousands of innocents to their fate.

Forsaken Skies is the explosive opening novel in the Silence trilogy, an epic tale of a fight against the odds – and the terror of realising that we’re no longer alone in the cold vacuum of space.

D. Nolan Clark is a pseudonym for an acclaimed author who has previously published several novels in different genres.

David Wellington was born and raised in Pittsburgh, Pennsylvania. He attended Syracuse University and received an MFA in creative writing from Penn State.

In 2004 he began serializing his novel Monster Island online. The book rapidly gained a following, and was acquired for print publication by Thunder’s Mouth Press.

Since then, Wellington has published more than 15 novels, and has been featured in The New York Times, Boing Boing and the Los Angeles Times.

You can find him online at davidwellington.net.