Today I am interviewing Brian Evenson, author of the new science-fiction novella, The Warren.

DJ: Hey Brian! Thanks for agreeing to do this interview!

Brian Evenson: Thanks, very happy to do it! I’m a writer who is known for having one foot in literature and one foot in genre, for bringing elements of both literary fiction and genre fiction together. I’ve published a dozen books of fiction under my own name. Under the slightly different name B. K. Evenson, I’ve published an Aliens novel, two novels set in the world of the video game Dead Space, and a collaboration (Lords of Salem) with Rob Zombie.

DJ: What is The Warren about?

Brian: It’s about a person, named X, who may or may not be human. He is alone in a place he calls the warren, on a hostile planet, with only a kind of machine he calls the monitor to advise him. But the monitor is old and flawed and has vast sectors of data that are corrupted. He knows that there have been others like him—some of their memories seem to have been implanted in him, maybe even their whole personalities—but he’s alone now. When he encounters someone who is both like him and not like him, his questions really begin.

DJ: What were some of your influences for The Warren?

Brian: There were a lot of influence. Gene Wolfe’s The Fifth Head of Cerberus was a book that I thought about a lot as I was writing The Warren, the first novella in particular. The Warren also picks up and expands on ideas from my novel Immobility, in a somewhat different world and somewhat different circumstances. It asks a lot of questions about what it means to be human. Also Alastair Reynolds work was important to me though in ways that are probably more evident to me than to readers. There was also a moment in Iain M. Banks’s The Hydrogen Sonata in which a character talks about having his whole body converted to storage for his memories that was important to me.

Brian: In The Warren, you’re kind of figuring out what’s happening at the same time the character is, so I think it puts you in a position where you end up identifying with his experience more. But, I think most readers will be able to figure out a little more than X does, that things that seem strange to him might be familiar to us, since we know about things like spaceships, to name just one.   I think, too, that you end up identifying with his struggle to understand who he is. We all struggle with that in different ways.

DJ: What is the universe for The Warren like?

Brian:  The Warren is set on a planet that’s almost uninhabited: at first it seems like there’s only one person there, and as he begins to address his monitor he starts to wonder if he’s really human. This single character lives in a ruined and mostly buried structure he calls The Warren. The environment is hostile to him—even with a protective suit, he’s convinced the atmosphere will kill him if he spends too much time outside. Technology is there, but breaking down and collapsing—it’s much more of a dying earth sort of book than a high-tech book. Eventually he meets a second person who seems to understand the world better than he does but who is very different from him. Only one of them can be human—if either of them is.

DJ: Warren – X is “not as human as he believes” and he also discovers “the existence of another above”… so are there even humans in this story? Can you give any clues or teasers as to what these two species are or aren’t?

Brian: That might give too much away. So much of the story is about X trying to decide if he’s human or not, and also with him trying to distinguish beween himself and what seems to be personalities of others that came before him. Only once you near the end do you get to see if X is human or not. But you do get to see it.

DJ: What was your favorite part about writing The Warren?

Brian: I loved imagining the warren itself—this ruined structure in which he lives. But I loved as well the idea of him having overlapping personalities in his head.

Brian: About what X is going to do now? Once he gains the knowledge he has at the end, what will he do with it?

DJ: What was your goal when you began writing the The Warren? Is there a particular message or meaning you are hoping to get across to readers when they finish it?

Brian: I wanted it to be a book that readers experienced: I wanted them to find out things as X was finding them out, so that they felt like they were living through something with someone. And, in the end, I wanted them to think about what it would be like to be alone and uncertain if life was going to go on after you. Considering the way things are moving on our own planet, that seems like a more and more relevant question to me.

DJ: This may have skipped some reader’s attentions, but The Warren is actually a novella. It seems to me that novella is gaining a rise is popularity again: what is it about the novella format that you like? Do you feel there is a particular advantage to telling your story that way over the novel?

Brian: I love that you can read a novella in a single sitting, in just an hour or two. It also has a lot of tautness and control. I think for a novel readers need moments to breath and breaks, but you can keep a novella intense throughout, just like you can a story. But a story is pretty limited in terms of what it can accomplish in its short length. A novella gives you enough extra space that you can really explore some complex and interesting problems. For me, it has the control and tautness of the story and at least some of the breadth of the novel. It’s my favorite literary form. It’s just so flexible and interesting.

DJ: When I read, I love to collect quotes – whether it be because they’re funny, foodie, or have a personal meaning to me. Do you have any favorite quotes from The Warren that you can share with us?

Brian: How about “And then a figure, bipedal but featureless, made of vulcanized cloth, with a head made of a bulb of steel and tempered glass, entered the room and spoke in a tinny voice. It was only later that I stumbled upon a sector of the monitor that told me this was a man wearing a suit.” Or: “I do not have an earliest memory.” Or: “When he was first removed, he was dead, I was sure of it.” Or: “Deep within my skull, something had changed, and I felt pair after pair of eyes snap open.”

DJ: Now that The Warren is released, what is next for you?

Brian: I’m working on a new story collection. I’ve also got some ideas for a novel, but have to find time to write it…

To my readers, if you are interested (which you should be!), here is a link to a musician, Xingu Hill, doing some songs inspired by Brians works! And its Brian vocals on the track too 😉

*** The Warren is published by Tor.com Publishing and is available TODAY!!! *** 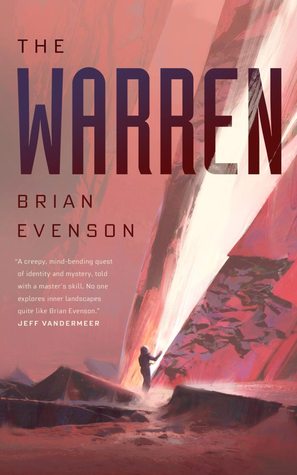 X doesn’t have a name. He thought he had one—or many—but that might be the result of the failing memories of the personalities imprinted within him. Or maybe he really is called X.

He’s also not as human as he believes himself to be.

But when he discovers the existence of another—above ground, outside the protection of the Warren—X must learn what it means to be human, or face the destruction of their two species.

Praised by Peter Straub for going “furthest out on the sheerest, least sheltered narrative precipice,” Brian Evenson is the recipient of three O. Henry Prizes and has been a finalist for the Edgar Award, the Shirley Jackson Award, and the World Fantasy Award. He is also the winner of the International Horror Guild Award and the American Library Association’s award for Best Horror Novel, and his work has been named in Time Out New York’s top books.