Today I am interviewing Walter Jon Williams, a Nebula-Award winner, and author of the new science-fiction novel, Impersonations: A Story of Praxis.

DJ: Hey Walter Thanks for agreeing to do this interview!

Walter Jon Williams: I view science fiction as a kind of infinite playground in which I can move from one set of equipment to the next, from the slides to the monkey bars to the swings— which is a way of saying that I don’t just write the same sort of book over and over. I’ve written cyberpunk (Hardwired, Voice of the Whirlwind, Angel Station), near-future thrillers (This Is Not a Game, The Rift), classic space opera (Dread Empire’s Fall), “new” space opera (Aristoi), post-cyberpunk epic fantasy new weird (Metropolitan and City on Fire), and of course the world’s only gothic western science fiction police procedural (Days of Atonement).

As you might guess, some of my books escape easy categorization.

I’ve been nominated for numerous literary awards, and for a number of years was science fiction’s “Bull Goose Loser,” the person who had the most award nominations without having actually won anything. But then I won Nebula Awards in 2011 and 2005, and I became Just Another Award-Winning Author.

DJ: What is Impersonations about?

Walter: On one level, it’s a space opera adventure, with alien species, plenty of action, a knotty mystery, and a huge explosive climax.

On another level, it’s an exploration of identity. Sula, my protagonist, is not what she seems, and she’s been putting on a false front for so long that she doesn’t quite know who she is anymore. Others in the story are hiding secrets and inhabiting false identities, and engaged in complex conspiracies that reflect Sula’s own situation, while putting her in peril.

On a third level, it’s about what happens when a young woman confronts the dream she had as a child, and finds it isn’t quite what she thought it was.

Walter: Firstly, you can read it without knowledge of the other books. I bring any new reader up to date very quickly.

In the Dread Empire timeline, Impersonations takes place after the first three books, following the conclusion of the Naxid War.

DJ: It has been quite a few years since the last book in the Dread Empire’s Fall series was release, so why, after all this time, did you come back to this world? Did you feel the story was still not complete, or perhaps fans really loved a certain character and were asking to see them again?

Walter: The series was never complete. It was intended to be a 9-12 book series, but the publisher bought only the first three books.

But the series wouldn’t go away. The three original books have all been through multiple printings, and they’re all still available. There has been some serious discussion about more new books in the series, but those discussions are ongoing and I can’t talk about them.

But the upshot is that I haven’t come back to the world, because I never left.

DJ: Could you briefly tell us a little about your main characters? Do they have any cool quirks or habits, or any reason why readers with sympathize with them? And for the record, before you even answer this question, solely from reading the synopsis, I am already in love whoever this “woman” is.

Walter: Sula is a brilliant, talented, tormented woman who has been bearing a deadly secret for most of her life, a secret that would get her killed if it were ever revealed.

She’s also my readers’ most popular character. They’ve been asking me for a Sula story for a long time now, and I hope I haven’t disappointed them.

Walter: The Dread Empire series is set in that venerable science fiction institution, the space empire. But the empire wasn’t established by humans, rather by the alien Shaa, who have forced humans and several other species into obedience to their ruthless creed, the Praxis. The Praxis is intended to establish an enlightened utopia, but it’s a utopia enforced by executions, torture, and mass murder.

The last of the Shaa has recently died, resulting in a civil war when the alien Naxids attempted to seize the empire and replace the Shaa at the top of the social pyramid. Sula is a veteran of this bitter, vicious conflict, and is finding herself adrift now that she’s no longer a warrior.

DJ: What was your favorite part about writing Impersonations?

Walter:  Reconnecting with my own series. I’d created a very complex, fully-inhabited universe, and writing the book was a great exercise in rediscovery.

Walter: I’m hoping that readers will continue to find Sula as fascinating a character as they have in the past.

DJ: What was your goal when you began writing the Impersonations? Is there a particular message or meaning you are hoping to get across to readers when they finish it?

Walter: One aspect of the story is this: history is deep. The characters in Impersonations are farther from us than we are from ancient Sumer. Sula brings a perspective to Earth history shaped by her life in a star-spanning tyranny, and she’s ignorant of aspects of Earth’s history that we might consider commonplace. (Governments based on the consent of the people, for one thing.)

So while many of the places visited in the novel are familiar, time has changed a lot of the landmarks, and the lens through which Sula views them isn’t our lens, but a telescopic view from a very distant future.

DJ: When I read, I love to collect quotes – whether it be because they’re funny, foodie, or have a personal meaning to me. Do you have any favorite quotes from but Impersonations that you can share with us?

Walter: “That’s what this is about. And this is who I am.”

DJ: Now that Impersonations is released, what is next for you?

Walter: My very next project is a big secondary-world fantasy series. Which I’ve never done before, and which I hope my readers will find a refreshing change of pace.

DJ: Before we go, what is that one thing you’d like readers to know about Impersonations that we haven’t talked about yet?

Walter: As a side note, I’d like to mention that I’ve personally visited almost every setting in the novel. Including the underwater parts.

Walter: As a way of easing access to the series, I’ve put a couple of the other works on sale. Impersonation’s companion piece, Investments, featuring my other protagonist Gareth Martinez, is now available for 99 cents in ebook form.

The original three novels are controlled in North America by the original publisher, but if you happen to live anywhere else in the world, I’ve put the first book, The Praxis, on sale for 99 cents.

These sales won’t last forever, so check them out while they’re available.

And in the meantime, Happy Reading!

*** Impersonations: A Story of Praxis is published by Tor.com and is available TODAY!!! *** 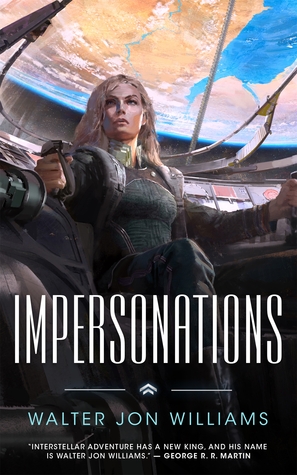 Having offended her superiors by winning a battle without permission, Caroline Sula has been posted to the planet Earth, a dismal backwater where careers go to die. But Sula has always been fascinated by Earth history, and she plans to reward herself with a long, happy vacation amid the ancient monuments of humanity’s home world.

Sula may be an Earth history buff, but there are aspects of her own history she doesn’t want known. Exposure is threatened when an old acquaintance turns up unexpectedly. Someone seems to be forging evidence that would send her to prison. And all that is before someone tries to kill her.

If she’s going to survive, Sula has no choice but to make some history of her own.

Walter Jon Williams has published twenty novels and short fiction collections. Most are science fiction or fantasy -Hardwired, Voice of the Whirlwind, Aristoi, Metropolitan, City on Fire to name just a few – a few are historical adventures, and the most recent, The Rift, is a disaster novel in which “I just basically pound a part of the planet down to bedrock.” And that’s just the opening chapters. Walter holds a fourth-degree black belt in Kenpo Karate, and also enjoys sailing and scuba diving. He lives in New Mexico with his wife, Kathy Hedges.