DJ: Hey Gabriel! Thanks for stopping by to do this interview!

Gabriel Squailia: I’m the author of Dead Boys and Viscera, two dark and decidedly odd fantasy novels. I make a living as a dance-floor DJ in the Berkshires of Western Massachusetts, and I greatly enjoy naps.

DJ: What is Viscera about?

Gabriel: It’s a brutal swords-and-sorcery fantasy with a twisted sense of humor. It’s a quest for vengeance that gets tangled up in the intestines of a number of strangers. And it’s about our deepest selves and the thorny paths they travel while they’re emerging.

DJ: What were some of your influences for Viscera?

Gabriel: Most obvious are the fantasy influences, from China Miéville’s Bas-Lag novels to GRRM’s A Song of Ice and Fire. (I also took a lot of cues from Jack Vance and Dungeons and Dragons on this front.) But the secret source of this novel was Rebecca Solnit’s A Paradise Built in Hell, a brilliant nonfiction book that argues that people are often at their noblest and most utopian in the midst of great catastrophes. So many of our tales of war, disaster, and dystopia present humanity as being perpetually on the verge of regression into animal chaos, and I think this is a lie we’ve swallowed too long. So I wanted to write a story that shows the hope on the other side of tragedy—which meant dragging my characters through the muck first.

Gabriel: Everything after the first few pages constitutes a spoiler, so I’ll stick with the first characters we meet. Rafe Davin has recently joined a Fortune-worshiping cult of gamblers called the Assemblage, and he’s following his Ace, Jassa Lowroller, through the woods outside of Eth. The two of them are decidedly Up to No Good, but Rafe is struggling with all of it—the bizarre tenets of the cult, the existence of Fortune, and the radical changes in his life that led him here—and that makes him very compelling to me. Mostly because I think too much, too, and spend a good deal of my life doing things I’m constantly questioning.

Gabriel: Viscera takes place in and around the City of Eth, which is in constant turmoil. There’s a constantly churning war for control of the city, with each ruler more corrupt than the last—but rather than getting deep into that history, the story focuses on the inner lives of the main characters, who are so numbed to this savagery that it forms a bloody backdrop to their own, personal upheavals.

DJ: Viscera have these “Gone-Away gods”, which are now dead, but their catacombs radiate this “eldritch power.” Can you tell us more about this eldritch power and the sorcery/magic that you created?

Gabriel: The power has its source in the calcified guts of the ancient gods, which are powdered and turned into powerful enchantments. My design rule was that all Ethian magic has its roots in innards, the gods’ or other people’s. So it’s a cornucopia of splatter and squish, a sort of fantasy-land answer to the aesthetic of Sam Raimi’s Evil Dead 2.

DJ: Some early reviews have describe Viscera as “laugh-out-loud funny.” Humor can be hit or miss depending on the person, so what type of humor do you write? What do you think the benefits of adding comedy to a story are?

Gabriel: This is dark, bleak stuff—the gallows humor of people who struggle against extreme odds—livened by old-school wit. The comic relief owes a lot to Shakespeare’s schemers and fools.

DJ: What was your favorite part about writing Viscera?

Gabriel: It was an incredibly quick process, at least for me, as I signed a contract with my editor before the book was written. My favorite parts involved the shocks of discovery that brought Rafe Davin’s past to life—hallucinations and flashbacks that I’d never imagined would become part of the story.

Gabriel: My books are weird, so there will always be readers talking about how it wasn’t what they expected. But for those who are vibrating on the same frequency, it might be the way body horror is used to evoke the feeling of dysphoria that so many transgender people experience, whether it’s provoked by our own bodies or our lives in “normal” human society. But it’s probably Hollis Runt, because he’s devious and funny, and keeps things moving.

DJ: What is your goal in writing Viscera? Is there a particular message or meaning you are hoping to get across to readers when it is finally told?

Gabriel: I set out to write a book about characters who reminded me of my friends and myself, in a world that put them in constant, horrific peril—without sacrificing their humanity. The intended message was, “We’re here, my loves, and it’s hard as hell. But we’re doing it. And whether we make it or not, we still deserve love.”

DJ: When I read, I love to collect quotes – whether it be because they’re funny, foodie, or have a personal meaning to me. Do you have any favorite quotes from Viscera that you can share with us?

Gabriel: I’m a sucker for pentameter, and for books within books, so I’d go with this quote from Granther’s Incantarium:

The stubbornest enchantment ever laid

In gold or parchment, stone or breath or mud,

Is but a debt the gods demand be paid

In salty waterfalls of mortal blood.

DJ: Now that Viscera is released, what is next for you?

Gabriel: Touring! I’ll be roaming around the Northeast giving readings and signing books until the new year. Come out and say hi if you’re within striking distance! http://www.gabrielsquailia.com/blog/2016/9/15/viscera-book-tour

DJ: Before we go, what is that one thing you’d like readers to know about Viscera that we haven’t talked about yet?

Gabriel: I adore the cover art, which features an otherworldly insect called the drash, brought to life by New Orleans artist Gabriel Shaffer. I like his stuff an awful lot, and I’m glad to have such a grabby image right up front.

*** Viscera is published by Talos Press and is available TODAY!!! *** 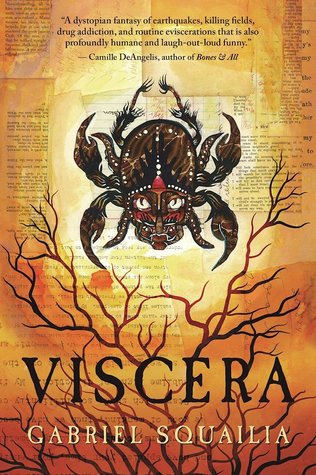 “A dystopian fantasy of earthquakes, killing fields, drug addiction, and routine eviscerations that is also profoundly humane and laugh-out-loud funny.” —Camille DeAngelis, author of Bones and All

The Gone-Away gods were real, once, and taller than towers.

But they’re long dead now, buried in the catacombs beneath the city of Eth, where their calcified organs radiate an eldritch power that calls out to anyone hardy enough to live in this cut-throat, war-torn land. Some survivors are human, while others are close enough, but all are struggling to carve out their lives in a world both unforgiving and wondrous. Darkly comic and viciously original, Viscera is an unforgettable journey through swords-and-sorcery fantasy where strangeness gleams from every nook and cranny.

“Exquisitely imagined, deeply insightful yet scathingly witty, Viscera barrels along at a scorching pace after vividly realized characters whose separate quests—for identity, for revenge, for release—find themselves on a collision course in a world that’s simultaneously both grimdark and surreal. Lusciously weird and utterly unique.” —Nicole Kornher-Stace, author of Archivist Wasp

“Viscera is a work of gleeful weirdness, set in a world that calls to mind China Miéville’s Bas-Lag novels, and full of characters fighting to reshape themselves and their destinies, in search of deep and resonant truth.” —Kat Howard, author of Roses and Rot

Gabriel Squailia is an author and professional DJ from Rochester, New York. An alum of the Friends World Program, they studied storytelling and literature in India, Europe, and the Middle East before settling in the Berkshires of western Massachusetts with their partner and daughter. Squailia’s first novel, Dead Boys, was published by Talos Press in 2015.