Thomas: The purple teddy bear is alone with no one to teach him about being alive. None of the other toys at the beginning of the book are sentient. He begins life being very dogmatic like the robot that he is but he is feeling things his user’s manual says can’t happen. He must learn about the emotions we take for granted while he is trying to save his way of life. He eventually names himself Don Quixote as he thinks he might be just a bit insane and feels his quest is perhaps impossible.

DJ: Aside from Don, the teddy bear, what other types of toys are there?

Thomas: Many and varied. My favorite is the curvy feminine dress up doll (ahem) whose body is made of plastic explosives. They run into a pack of enemy toys and explode.

There are also giraffes with necks that are sniper rifles, toy tanks that fire real bullets, elephants with a mortar in their chest, nurse dolls that do repairs and many, many more.

DJ: What is the universe for Toy Wars like?

Thomas: Toy Wars (or Toy World) is on the planet of Rigel-3 (the third planet from the star Rigel). The planet doesn’t have a water cycle like earth. It has instead a mercury cycle. This lends itself to a very different fauna and landscape.

Weather, although very cold and low in pressure to humans, is somewhat benign unless a storm comes. Rain comes down in large balls of mercury that can be several gallons each. The impacts can be devastating.

The book Toy Wars doesn’t have a government. Each Factory is autonomous and more like a hive than groups of individuals. In the sequel Toy Reservations, the toy government is a big part of the novel and the problem.

DJ: What was your favorite part about writing Toy Wars?

Thomas: Totally a free reign. There were no outlines. My characters could go where they wished within the bounds of physics and the world I created.

Thomas: When do the humans show up? As the toys worship “Humans” as gods obviously some book in the future they have to meet (evil author chuckle)

DJ: What was your goal when you began writing the Toy Wars? Is there a particular message or meaning you are hoping to get across to readers when they finish it?

Thomas: I do not write to send a message. I write to entertain – full stop. I often write about things that come up from a viewpoint that isn’t my own. Entertainment is my only goal. If the person walks away happy that they received several hours of joy, then I’m one of the happiest people in the world. If they come looking for the sequel, even better.

DJ: When I read, I love to collect quotes – whether it be because they’re funny, foodie, or have a personal meaning to me. Do you have any favorite quotes from Toy Wars that you can share with us?

Thomas: I’ll give you two.. one in the book: “So you put something unknown in my head? Just for the fun of it?” – Don Quixote

and one of the fake “testimonial” quotes on the jacket cover.

DJ: Now that Toy Wars is released, what is next for you?

Thomas: Toy Reservations is now on the shelf as are three books in the CorpGov Chronicles. I’m heavily involved in the editing of my company’s first anthology “Enter the Apocalypse”. My goal is to have this out by December.

Author Newsletter: Contact me at tgondolfi@tanstaaflpress.com to be added to the TANSTAAFL Press newsletter.

DJ: Before we go, what is that one thing you’d like readers to know about Toy Wars that we haven’t talked about yet?

Thomas: Some people think from its cover and the use of Toys, not to mention some humourous concepts that this is a light hearted children’s book. It is not. It is a serious work talking about artificial intelligence and warfare.

Thomas: Thank you, DJ, for taking the time to interview me. One thing an author can’t get enough of is people seeing his works for the first time. This interview gives me more opportunity to entertain more people. Happiness can make the world go-round.

*** Toy Wars is published by TANSTAAFL Press and is available TODAY!!! *** 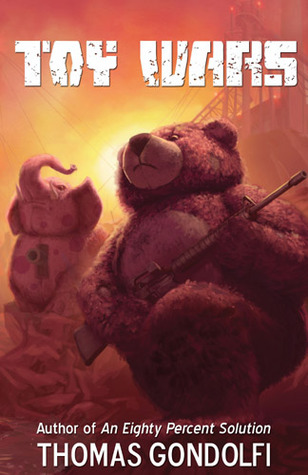 Don wakes from a normal manufacturing process as a two-meter, sentient teddy bear sporting purple fur. He learns he is the result of a desperate gamble by an autonomous factory with hashed programming. To protect his home, his way of life, and his creator, Don must lead other killer toys across a harsh alien landscape to battle the native fauna of Rigel-3 and even his own kind.

His discoveries change not only his view of the wars, but his own Human gods. In spite of these trials, Don’s harshest test may be getting his own brethren to believe his adventures and the soul-churning changes needed to survive.

Thomas Gondolfi, father of three, gamer and loving husband, claims to be a Renaissance man and certified flirt. Raised as a military brat, he spend the first twenty years of his life moving to a new place every few years giving him a unique perspective on most regions of the United states.

Educated as an electrical engineer from the South Dakota School of Mines and Technology and working in high tech for over twenty years, Tom has also worked as a cook, most phases of home construction, and even as the personal caregiver to a quadriplegic. Tom enjoys games and after nearly thirty years he can still be found most weekends playing some role playing variation, board game and/or Texas hold-em.

Tom Gondolfi has been writing fiction for over twenty-five years and doing it professionally for at least fifteen. Most of his short stories have been commissioned for use in gaming products, such as Babylon 5 Wars and Starfleet Battles. He has honed his abilities through writing well over a million words and having them independently critiqued. He has been a member of and chaired several different “destructive” critique groups.

“Toy Wars,” Tom’s first commercially viable novel, was completed fifteen years ago with a recent polish prior to publication this year. “A marriage, a move, a new job, a new home and three teens – life just got in the way of publishing my work,” he said of the delay.

“An Eighty Percent Solution” is the premiere novel of the CorpGov Chronicles. Tom is already writing book two, “Thinking Outside the Box,” and book three, “Paradigm Shift,” with a total of nine books already plotted out for the series.