Today I am interviewing Alex White, author of the new fantasy novel, Every Mountain Made Low.

DJ: Hey Alex! Thanks for stopping by to do this interview!

Alex White: I live to create: photography, board games, books, music, you name it–and I take all that random stuff seriously. I’ve done videos for Presidents, released a few albums, and I’m finishing up my eighth book. I’ve even got an app in the Google Play store called Capta. The video work and the writing have been profitable for me. I can’t attest to the quality of that other stuff. J

For better or worse, I was born and raised in the American Deep South, where I live today. That’s probably why I’m always making things. I wasn’t into sports, church and cable television, so I had a lot of time on my hands.

DJ: What is Every Mountain Made Low about?

Alex: Here’s my pitch: An autistic, working-class lesbian must make a deal with vicious ghosts to topple a capitalist oligarchy. It falls squarely into the New Weird camp with little regard for genre, considering it has elements of urban fantasy, dystopian, horror and thriller. It’s a close, small story with a lot of personal drama, but no one is going to destroy the world / galaxy / multiverse. It’s a conflict for the future of the South. The stakes are everything for my main character, though, and we see everything through her eyes.

DJ: What were some of your influences for Every Mountain Made Low?

Alex: I immediately think of Flannery O’Connor’s short stories and Margaret Atwood’s The Handmaid’s Tale because of the colorful characters and pervasive inequality portrayed through their lives.

Oddly, Ayn Rand was a strong influence, too. Not a positive one, but something I wanted to write against. I find the philosophies in Atlas Shrugged and The Fountainhead disgusting, because at their core, they’re about taking anything you want without regard for those around you. Howard Roark isn’t a team player, he destroys housing for underprivileged citizens in his best moment and rapes Dominique Francon at his worst. How can people look to him as an example of how to live?

Alex: My main character, Loxley Fiddleback, is an autistic woman, living independently. She’s smart and bullheaded, with dreams of starting her own farm far away from the Hole (That’s Birmingham, Alabama.). All the women in her family line can see ghosts, except in her case, the ghosts see her, too. They’re not nice folks. The book is written in a close third person, so it’s meant to draw you into her perspective, make you feel her anxiety and understand her difficulties.

DJ: As you have just stated, you main characters does have a mental disability, why did you feel it was important make your protagonist disabled and how do you feel about the underrepresentation that these characters seem to get?

Alex: I’m usually frustrated by the neurotypical representation of autistic characters as sad calculators and kung-fu robots. All too often, they’re codebreakers with no control over their outcomes, secondary to the musclebound straight white guy action heroes. Autistic folks have their own hopes and dreams, and feel emotions just as strongly as everyone else, and the fact that Hollywood hasn’t grasped that made me write this book. I have an autistic son, and I don’t want him to grow up with the same old crap.

There are many excellent autistic authors working today, and I strongly advise readers check them out for an in-depth perspective on the disorder: Carly Fleischmann, Ido Kedar, Temple Grandin and Naoki Higashida, just to name a few.

DJ: What is the universe/world for Every Mountain Made Low like?

Alex: The people of the Mythic South live in squalor. They’re typically hand-to-mouth, and socially stratified by design. The Consortium (a melding of Edison, Carnegie, Westinghouse, Chase and Wells Fargo) owns all of the rural land, and they control all production and services, forcing the citizens into cramped cities. Crime runs rampant, allowing organized crime and tyrannical leaders to carve out their own empires. Lurking in the shadows are the all the legends of Appalachia and the Southern States, the witches and ghosts, ready to prey on the truly unfortunate. In spite of their dire situation, southerners cling to their traditions and superstitions, living life as they always have.

DJ: Could you go into a little more depth about what “The Hole” is?

Alex: The Hole is Birmingham, Alabama, but it’s been strip-mined into a crater. It’s an inverted city, a series of concentric rings descending toward the smelting facility at the center. There are nine rings, starting at Edgewood, where the ultra-rich live. Their houses both have a view of the surrounding countryside and can look down on everyone else. The closer you get to the Foundry, with its constant noise and dirty air, the poorer people are. Loxley lives on the seventh ring where things are considerably more desperate.

DJ: What was your favorite part about writing Every Mountain Made Low?

Alex: I loved writing Loxley. She’s daunting, because I never want to do a disservice to her character. It’s important that she be an appropriate representative of an valuable and diverse community, but she also has to be an appealing and understandable character. I never wanted to compromise with her and write some cardboard cutout version of a message, and that was tough to negotiate. In the end, I’m proud of her.

Alex: I would imagine they’ll be most struck by the unique perspective, and its impact on the prose. We notice what she notices, and we miss what she misses. I’m hoping they’ll find the voice of the book compelling.

DJ: What was your goal in writing Every Mountain Made Low? Is there a particular message or meaning you are hoping to get across to readers when it is finally told?

Alex: If you chase some greater ethical truth at the expense of everything, you’re going to crush people, starting with anyone who lives on the fringes of society. Compassion is the most important thing we can bring to this planet, and those who lack empathy, but have principles, are nothing more than monsters.

DJ: When I read, I love to collect quotes – whether it be because they’re funny, foodie, or have a personal meaning to me. Do you have any favorite quotes from Every Mountain Made Low that you can share with us?

Alex: This, from the villain: “Over time, Vern taught me that some things were right, and some things were wrong. ‘Iron sharpeneth iron; so a man sharpeneth the countenance of his friend.’ I was a flexible man, soft of character and will. I became a hard man, forged by the hand of God, and he made me inflexible.”

DJ: Now that Every Mountain Made Low is released, what is next for you?

Alex: My agent won’t allow me to say just yet, but things are going well! Stay tuned on that front!

DJ: Before we go, what is that one thing you’d like readers to know about Every Mountain Made Low that we haven’t talked about yet?

Alex: Everyone always says how much they love the cover, so I have to mention Jeffrey Alan Love. He did such a bang-up job! You can see his work at http://www.jeffreyalanlove.com

*** Every Mountain Made Low is published by Solaris and is available TODAY!!! *** 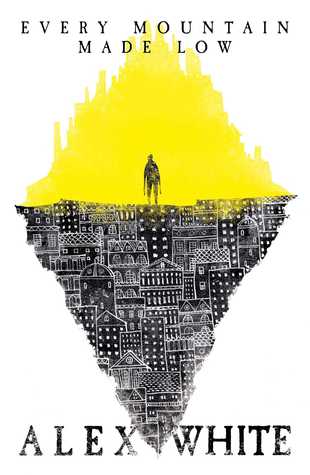 Loxley Fiddleback can see the dead, but the problem is… the dead can see her.

Ghosts have always been cruel to Loxley Fiddleback – but none more than the spirit of her only friend, alive only hours earlier. Loxley isn’t equipped to solve a murder: she lives near the bottom of a cutthroat, strip-mined metropolis known as “The Hole,” suffers from crippling anxiety and can’t cope with strangers. Worse still, she’s haunted.

She inherited her ability to see spirits from the women of her family, but the dead see her, too. Ghosts are drawn to her, and their lightest touch leaves her with painful wounds.

Loxley swears to take blood for blood and find her friend’s killer. In doing so, she uncovers a conspiracy that rises all the way to the top of The Hole. As her enemies grow wise to her existence, she becomes the quarry, hunted by a brutal enforcer named Hiram McClintock. In sore need of confederates, Loxley must descend into the strangest depths of the city in order to have the revenge she seeks and, ultimately, her own salvation.

Alex White was born and raised in the American south. He takes photos, writes music and spends hours on YouTube watching other people blacksmith. He values challenging and subversive writing, but he’ll settle for a good time. In the shadow of rockets in Huntsville, Alabama, Alex lives and works as an experience designer with his wife, son, two dogs and a cat named Grim. He takes his whiskey neat and his espresso black.