Today I am interviewing Neal Chase, author of the new middle-grade fantasy novel, Worthy of Song and Story, first book in the Stain the Viking series.

DJ: Hey Neal! Thanks for stopping by to do this interview!

Neal Chase: The easiest way to sum me up is that I’m an author, lawyer, basketball coach, and PS4 player extraordinaire. I’m married to my wife Karen and have two sons, who really inspired me to write Worthy of Song and Story.

DJ: What is Worthy of Song and Story about?

Neal: It is about a twelve year old boy named Stian who wants to be the greatest Viking ever. Unfortunately, a couple things stand in his way: he is too young to go on Viking raids and he may be the son of Loki, the same Loki who is foretold to bring about the end of the world. Stian sets off to find out the truth, the only way he knows how, by freeing Loki from the gods’ prison. If he succeeds, he’ll become the world’s greatest Viking, but if he fails, he’ll fall victim to the gods’ merciless justice.

DJ: What were some of your influences for Worthy of Song and Story?

Neal: My two sons are probably my biggest influence in writing Worthy of Song and Story. With all the electronic distractions in the world, it is real hard to get them to sit down and read, especially the older one. If they are going to read something, it needs to have action and get their attention right away. Other than the big name block busters, it was hard finding books that did that, so I decided to write one.

Neal: There are two main characters, Stian and Dahlia. Stian (pronounced like Ian with a St at the beginning) is kind of a klutz and a goofball, not really what you would picture as a hero, but he tries and he has a good heart. Like most twelve years, he thinks he can do pretty much anything. He also enjoys making up nicknames for people.

Dahlia on the other hand is part dark elf, which alone is pretty cool, but she is smart, opinionated, and really does not like living in her mom’s shadow. She also can perform fire magic.

DJ: What is the universe/world for Stain the Viking series like?

Neal: The Stian the Viking series takes place in the nine worlds of Norse mythology. The setting for the first book is Midgard, or earth, in the early 800s in what is now current day Norway, Denmark, and Germany. Vikings are the prominent force in Stian’s world, so the world mainly survives by raiding, farming, and trading. In later books, Stian will journey to the other worlds. A large portion of book two takes place in Jotunheim, the land of the frost giants.

DJ: What is it about Vikings and Norse mythology that make them so awesome? XD

Neal: It’s Vikings and Norse mythology, could it get any better? Okay, maybe if they were wrapped in bacon. Seriously though, ever since I was a kid I loved Vikings and the Norse gods. The stories are larger than life and anything is possible, but at the same time they aren’t straight forward. There are changing friendships and alliances which make the stories even more exciting. I’m trying to capture all of that in the Stian the Viking Adventures.

DJ: What was your favorite part about writing Worthy of Song and Story?

Neal: As weird as it may sound, my favorite part was actually finding out what would happen. Unlike many writers, I don’t outline before I start a story. I come up with the big idea and the major characters and start writing. So, I really didn’t know how the story would turn out until I wrote it. With Worthy of Song and Story, it wasn’t until the fifth draft that the ending came around.

Neal: Hopefully, they will talk about enjoying a good story with characters that remind them of themselves and their friends and family. There are also issues of family, friendship, and even race (Dahlia is a dark elf in a Viking dominated world), which hopefully will make the reader think.

DJ: What is your goal in writing Stain the Viking series? Worthy of Song and Story is only the first book of the series, but is there a particular message or meaning you are hoping to get across to readers when it is finally told?

Neal: The main recurring themes throughout the series are friendship and family and how they are not always what you first think. Sometimes people who you never think could be a good friend when you first meet them, turn out to be your best friends.

DJ: When I read, I love to collect quotes – whether it be because they’re funny, foodie, or have a personal meaning to me. Do you have any favorite quotes from Worthy of Song and Story that you can share with us?

Neal: I have few. The first one is not really a quote, it is Stian thinking, but it I like it because it sums up a boys thinking process pretty well.“Boys weren’t supposed to attack girls. That was one of the major rules. It was up there with no farting during dinner. No one ever broke those rules.”

“Whoever heard of a five foot giant?”

“I don’t want to sound stupid or anything, but aren’t you a walking torch?”

Dahlia also has some quotes I like. Her’s are more intellectual than Stian’s.

“Just because something is bigger doesn’t always mean it’s better.”

“I’m just not sure if that was one of the smartest things I ever heard or the stupidest.”

“I don’t care for physical combat. It’s too barbaric. Magic is much more civilized.”

DJ: Now that Worthy of Song and Story is released, what is next for you?

Neal: I am actually working on two different books: book two in the Stian the Viking Adventures and a new series which is a contemporary fantasy taking place in New Orleans.

DJ: Before we go, what is that one thing you’d like readers to know about Worthy of Song and Story that we haven’t talked about yet?

Neal: Worthy of Song and Story is a fun book and a quick read. I wrote it with the reluctant reader in mind. I also tried to introduce issues in a way that if the reader wanted to think about them they could, but not so glaring that there was no way to avoid them and just enjoy the story.

*** Worthy of Song and Story is published by Fiery Seas Publishing and is available TODAY!!! *** 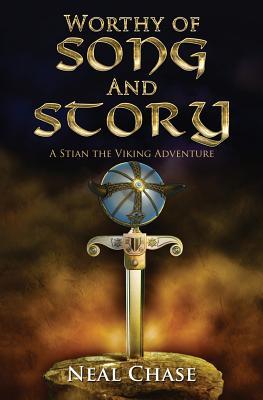 Twelve year-old Stian’s plans to be The Greatest Viking Ever appear to be over before they even begin. He’s captured by Dahlia–a dark elf and a girl. If that wasn’t bad enough, he discovers he may be the son of Loki, the greatest enemy of the Viking gods and the one foretold to bring about the end of the world.

Knowing he is meant to be extraordinary, Stian decides to discover the truth for himself and free Loki from the clutches of Odin. Only then, will he discover who he is and what he is meant to do.

Stian must out-think, misguide, and defeat Thor’s children. To do this he will need the power of Gram–a sword with magical powers. There is one catch, only one pure of heart with the desire to help others, is worthy of wielding it. If Stian succeeds, he will become the world’s most famous Viking, but if he fails he will fall victim to the gods’ merciless justice.

Neal Chase lives in San Antonio, Texas, with his wife, two children, two dogs, and a bird, which strangely has the same name as his dad. He is a member of SCBWI and the Writers’ League of Texas. When he is not writing and reading, you can find Neal coaching football or adventuring with the help of his PlayStation.