DJ: Hey Jonathan! Thanks for stopping by to do this interview!

Jonathan Strahan: Hey! Thanks for talking to me! I’m an editor, critic, and podcaster who lives in Australia. I’ve been editing books since 1996 and podcasting since 2010. I’m also the reviews editor for Locus (www.locusmag.com), and edit the Best Science Fiction and Fantasy of the Year anthology series each year.

DJ: What is Bridging Infinity about?

DJ: What were some of the inspirations behind Bridging Infinity?

Jonathan: All of the great science fiction I read while I was growing up. Stuff like Larry Niven’s Ringworld and Isaac Asimov’s Foundation and a whole bunch of classic SF. Also, to be honest, the opening of Star Wars, with that incredible Imperial Star Destroyer.

DJ: What kinds of stories can readers expect in the anthology?

Jonathan: There are fifteen stories in the book and they range from hard SF tales of creatures that live inside suns to tales of environmental engineering projects that solve global warming. There’s adventure, a little comedy, and a fair bit of action.

DJ: Being an editor, what do you believe makes a good [science fiction or fantasy] story?

Jonathan: I could tell you something like a good story is one that is internally consistent, engaging, thought provoking and so on, but the truth is that a good story is whatever each reader says it is. For me, any story where I can’t wait to find out what happens next and that I remember a month later is a good story.

DJ: This may be a difficult question to answer, but what are some of your favorite stories in Bridging Infinity? I don’t mean what you believe is the best, but perhaps some stories have a particular setting, theme, message, or character that you stood out to you?

Jonathan: I think I’ll pass on this one. I don’t think an editor can have favourites when working on a book like ths. There are some I particularly love, but everyone should read the book and see what they think for themselves.

DJ: What was your favorite part about editing Bridging Infinity?

Jonathan: It’s that moment when a story first arrives in you mail and you don’t know if it’s going to be terrible or wonderful, but you open it and start to realise what you have is wonderful. That happened with one or two of the stories here. Also getting to see some really smart people try to come up with ingenious and engaging ways to solve some of our greatest problems. That was fascinating.

DJ: Bridging Infinity is the fifth book to be released in the Infinity Project series, so from the previous four collections, how have the reviews been from readers, bloggers, and reviewers? What do most people seem to like about them?

Jonathan: It’s probably a stretch to call the Infinity books a series, but as Locus critic Gary K. Wolfe has said, it’s a series that allows writers to re-interrogate classic science fiction ideas and themes in a modern and inclusive way The series itself is one of the few original anthology series in SF today and it’s been incredibly well received, with stories winning and being nominated for major awards like the Hugo and the anthologies themselves winning Locus, Aurealis and other awards. It really has been a wonderful success.

DJ: What do you think readers will be talking about most once they finish it this one?

Jonathan: I hope the way it re-engages our sense of wonder, how much they loved particular stories, and how it made them reconnect with science fiction once more.

DJ: Now that Bridging Infinity is released, what is next for you?

Jonathan: There’s no rest for the wicked. I’m currently working on two books: The Best Science Fiction and Fantasy of the Year: Volume 11 and the next Infinity book, Infinity Wars. It looks at the future of war and how we’ll live with that. I also have a few other things I’ll be working on, but it’s a little early to discuss those.

*** Bridging Infinity  is published by Solaris and is available TODAY!!! *** 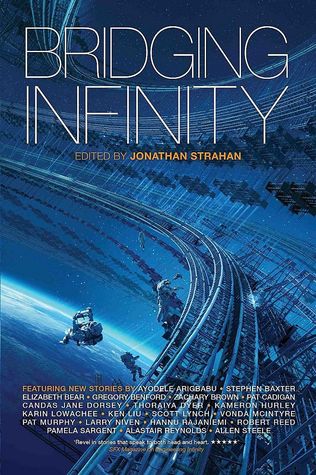 Sense of wonder is the lifeblood of science fiction. When we encounter something on a truly staggering scale – metal spheres wrapped around stars, planets rebuilt and repurposed, landscapes transformed, starships bigger than worlds – we react viscerally. Fear, reverence, admiration –  how else are we to react to something so grand?

Bridging Infinity puts humanity at the heart of these vast undertakings – as builder, as engineer, as adventurer – reimagining and rebuilding the world, the solar system, and even the entire universe.

Jonathan Strahan is an award-winning editor, anthologist, and podcaster. Since 1997 he has has edited more than forty anthologies including The Best Science Fiction and Fantasy of the Year, Infinity, New Space Opera, and Eclipse anthology series. He is the recipient of the World Fantasy Award, a three-time winner of the Locus Award, a four-time winner of the Aurealis Award, and an eight-time Hugo Award nominee.  He is the reviews editor of Locus, and the co-host of The Coode Street Podcast. He lives in Perth, Western Australia with his wife and their two daughters.