Today I am interviewing Peter Fugazzotto, author of the new science-fiction novel, Into Darkness.

Peter Fugazzotto: I’m one of those authors exploring the brave new world of indie publishing. While I’ve had short stories published in more traditional magazines like Heroic Fantasy Quarterly and Grim Dark Magazine, my longer works have all been indie published. I’m focused on dark fantasy, science fiction, and horror.

Part of the courage to blaze the writer’s path comes from my background in martial arts. I train Brazilian Jiu Jitsu, a form of submission grappling (think chokes and armbars), and stick fighting. I am a brown belt in BJJ and won a World Championship as a purple belt (old man division). So I have learned to accept obstacles as the path which prepares me for the writing life.

My main goal as an author is to write good stories that entertain readers and make them want to come back for more.

DJ: What is Into Darkness about?

In a future world of warring AIs, company agent Marley – half-human, half-machine – agrees to a mission to bring a deep space mining colony back online.

But when Marley and her mercenary crew crash land on the colony, she soon realizes that the colony holds dark secrets. Horrors that threaten her life and the future of humanity.

And she will have to decide who lives and who dies.

DJ: What were some of your influences for Into Darkness?

Peter: The initial seed for Into Darkness was Joseph Conrad’s incredible novella Heart of Darkness. But I wanted to push this through a lens of science fiction with a touch of horror.

Some of those science fiction influences have been the Alien movies and books (including those written by James A. Moore and Timothy Lebbon) since they have a strong sense of action and horror.

Peter: The main character in the story is Marley, a female agent/assassin working for a conglomerate run by an AI. She was in a horrible accident in which her husband and unborn child died, and agreed to be Augmented (made half-human, half-machine) by the AI in order to avenge the murder of her family. She struggles with loyalty to the company and achieving the objectives of her mission and her own desire for freedom.

Another major character is Captain Adams who pilots a deep space transport and is in love with the ship’s AI. His idealism and dreams come into direct conflict with their mission to the mining colony.

The other main viewpoint character is Gomez, a hardened mercenary who is hoping for one last job so he can retire back to Earth. He hates the AIs and soldiers who have been Augmented so he and Marley are at odds from the get go.

DJ: What is the universe/world for Into Darkness like?

Peter: The story takes place in a futuristic world in which AIs (Artificial Intelligences) have become major power players in the universe. They have warring factions and one could see them as gangsters looking to grow their empires.

Most of the story takes place either on a deep space transport, a remote way station, or the deep space mining colony. So the reader follows Marley on her path as she moves further away from the anchors of civilization.

DJ: I’m assuming you can’t tell us about the “Horrors that threaten her life and the future of humanity,” dues to spoilers, but is there anyway you can possibly tease us about it a little more?

DJ: How about the AIs of the story? There are half-human, half-machines, but what other type of tech is there in the story?

Peter: One of my favorite technologies in the story is fluvium, a biometal. It is a metal that can combines with human flesh to create a living armor. It is one of the most sought after resources in the universe, especially by the military. So when the major fluvium mining colony goes dark, we’ve got a problem that urgently needs to be handled – and that’s why Marley’s mission is so critical.

DJ: What was your favorite part about writing Into Darkness?

Peter: I really enjoyed teasing out how this dangerous mission to the mining colony was going to impact and ultimately change the main characters. They each have major decisions to make, and each of them have to face their darkest demons.

Peter: I think readers will be talking about what a fast-paced, thrill ride the story was. On top of that I am hoping that the journey and transformations of the characters stick with readers.

DJ: What is your goal in writing Into Darkness? Is there a particular message or meaning you are hoping to get across to readers when it is finally told?

Peter: My main goal is to entertain my readers.

DJ: Now that Into Darkness is released, what is next for you?

Peter: I’m working on the first book of a new dark fantasy series. It takes place in a Southeast Asian-inspired world fueled by fungal magic, and the first book is the story of a disgraced swordswoman (former bodyguard to the Emperor) who protects a boy from a hunting party. Early feedback from beta readers has been super positive.

DJ: Before we go, what is that one thing you’d like readers to know about Into Darkness that we haven’t talked about yet?

Peter: I’ve got ideas in the back of my head for further adventures for those characters who survive the mission on the mining colony. So if readers want more, they should let me know and I’ll get them more stories. 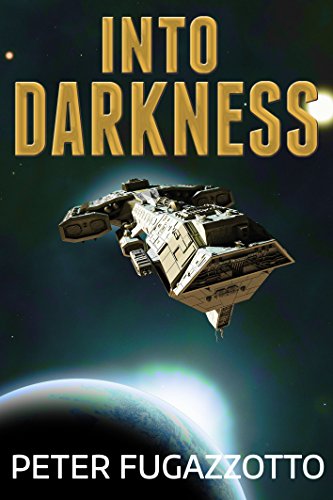 What does it take to become human again?

In a future world of warring AIs, company agent Marley – half-human, half-machine – agrees to a mission to bring a deep space mining colony back online. But when Marley and her mercenary crew crash land on the colony, she soon realizes that the colony holds dark secrets. Horrors that threaten her life and the future of humanity. And she will have to decide who lives and who dies.

Peter Fugazzotto is a writer of fantasy and science fiction. His short stories have been published in Heroic Fantasy Quarterly and Grimdark Magazine. His series The Hounds of North was launched with The Witch of the Sands in 2014. He is a lifelong martial artist and a World Champion in Brazilian Jiu Jitsu.

More information about Peter and his writing, including free stories, can be found at www.peterfugazzotto.com