Today I am interviewing Nik Abnett, author of the new science-fiction novel, Savant.

DJ: Hey Nik! Thanks for stopping by to do this interview!

Nik Abnett: Hi, and thank you for having me.
Some readers will know my work for the Black Library on Warhammer and Warhammer 40K. I’ve also collaborated with my husband, the writer Dan Abnett, on a couple of Lara Croft, Tomb Raider novels and on Fiefdom for Rebellion, which was a tie-in novel to the Kingdom comic strip in 2000AD. I also write short stories for anyone who asks, and I contributed the backmatter for the acclaimed comic book Wild’s End by Dan Abnett and INJ Culbard. I’ve been writing, editing and proof-reading tie-in fiction for almost twenty years, so, with Savant I wanted to branch out and do something very different, and more personal.

DJ: What is Savant about?

Nik: This really ought to be the simplest question in the World, but it’s the one I always struggle with most. Here goes: Savant is about a symbiotic relationship between two people, against the backdrop of a controlling state in the middle of a global crisis.

DJ: What were some of your influences for Savant?

Nik: Influences come from all over the place. I like twentieth century SF, including 80s movies, but I think the inspiration for Savant came from other things, too. I was influenced by ideas around Autism and parenting. And, to some degree, this is also a political novel; thematically, I thought a lot about the rights of the individual and how much the state can, and does, interfere in peoples’ lives.

Nik: My main characters work very much as a pair, and they are opposites in many ways. Active Tobe is all about thinking, he’s a savant/mathematician, and he’s all quirks and habits. Metoo, Tobe’s carer, is all about feeling, making sure that all the routines and coping strategies are in place so that Tobe can do his job. I think both characters are compelling, because they are two sides of all of us, but polarized.

Nik: Savant takes place on a future Earth in our own, known universe. The people I deal with in the novel live outside the main society, because they are special in various ways. They are also heavily controlled by a central government that imposes a variety of routines and security measures, because the Earth is under threat. Technology levels are not very different from the sort of thing we are all very familiar with, perhaps similar to technology on Earth around the second half of the twentieth century, with one or two exceptions. I’m a fan of SF from that period, so it influenced me in some ways. The Shield is the single piece of technology that is new for this universe, along with the mental capacities of the so-called Actives who maintain it. I also tried to use language in interesting ways to paint a picture of a World that relies heavily on synthetic products, as opposed to the real thing; everything has a ‘pro’ substitute.

DJ: What exactly is this ”Shield” that is protecting the Earth and who are “The Active?”

Nik: Actives are individuals with particular intellectual gifts, but decreased social skills, and they’re very reactive. They maintain the Shield, unconsciously, when their minds are working at optimum levels. Confusion, fear, anger… the negative emotions interfere with the Actives’ abilities to keep the Shield efficient.

The Shield is simply a mechanism by which the Earth is rendered invisible to the rest of the universe. On this version of Earth, it’s the only course remaining that has any hope of keeping the human race safe.

DJ: What was your favorite part about writing Savant?

Nik: I think my favourite part of writing any fiction is the development of the story. I don’t plot at the outset; I like what comes early in the novel to inform what comes later, and, sometimes, what comes later in the novel requires me to make significant edits to earlier chapters. The writing generates a lot of ideas, and I like the process of them all coming together in my head and on the page.

Nik: I think, in some ways, Savant is quite a demanding novel, so I imagine readers discussing just what exactly is going on and why. I think they’ll talk a lot about the world building. I generally don’t set out my stall at the beginning of a story, but prefer to explain or contextualise as I go along, and allow the reader to gain insights and learn about the World as the story develops. I imagine they’ll talk about Tobe’s autism/savantism, but I hope they’ll also take an interest in Metoo’s strengths.

DJ: What is your goal in writing Savant? Is there a particular message or meaning you are hoping to get across to readers when it is finally told?

Nik: I set out with the idea of writing a story about unconditional love, and, in one way, I did satisfy that goal; Metoo’s devotion to Tobe is key to the story. But, other ideas took over along the way. I think the idea that a planet would hide is interesting, because it suggests pacifism or possibly desperation. Neither of the protagonists are aggressors, but because the state can’t control what’s on the outside of the shield, they do everything they can to control what happens on Earth. Thematically, I think I wanted most to talk about individuals’ rights and how they can be protected.

DJ: When I read, I love to collect quotes – whether it be because they’re funny, foodie, or have a personal meaning to me. Do you have any favorite quotes from Savant that you can share with us?

Nik: I’m not sure the novel’s hugely quotable, and I see it much more as an entire experience than a sum of parts. Having said that, “It is the same”, something that Tobe repeats often, is central to the novel. I thought long and hard about using a contraction, but decided against it.

DJ: Now that Savant is released, what is next for you?

Nik: I’m currently working on writing for a computer game, with my partner, Dan Abnett; we’re doing a lot of world-building. I’ve also begun a second novel in the same universe as Savant. It takes place in space, on the other side of the shield, in the same timeframe as the first novel, and is more of a companion piece than a sequel. It’s working title is Seekers.

Blog: http://www.nicolavincent-abnett.com where I talk about writing and other stuff. And I also write an antidote to fashion blog at http://www.damnfinemonkeys.com about getting dressed every day.

DJ: Before we go, what is that one thing you’d like readers to know about Savant that we haven’t talked about yet?

Nik: Other than juvenilia, Savant is the first novel that I completed, and I waited a long time to do it. It also took seven years before it was published. So, I’d like to suggest that budding writers do more, sooner, and that they knock on doors with more confidence than I had.

Nik: My pleasure. Thanks for some intriguing questions; I really had to think about some of them.

*** Savant is published by Solaris and is available TODAY!!! *** 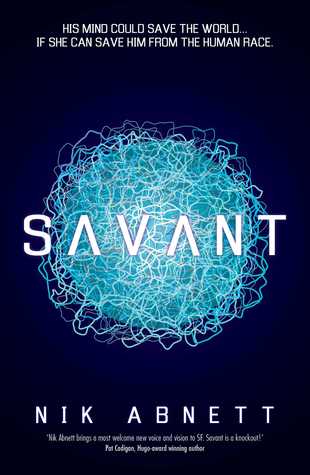 His mind can save the world, if she can save him from the human race…

The Shield is Earth’s only defence. Rendering the planet invisible from space, it keeps humanity safe from alien invasion. The Actives maintain the shield – no one is sure how – but without them, the Shield cannot function.

When an Active called Tobe finds himself caught in a probability loop, the Shield is compromised. Soon, Tobe’s malady spreads among the Active. Earth becomes vulnerable.

Tobe’s assistant, Metoo, is only interested in his wellbeing. Earth security’s paramount concern is the preservation of the Shield. As Metoo strives to prevent Tobe’s masters from undermining his fragile equilibrium, the global danger escalates.

The Shield must be maintained at all costs…

Nik Abnett has published work in a number of mediums, including advertising, training manuals, comics and short stories. She has worked as a ghost writer, is a frequent contributor to Black Library Publishing, and regularly collaborates with her partner, novelist and comic author Dan Abnett. In 2012 she was runner-up for the inaugural Mslexia novel-writing competition. Savant is her first solo, independent full-length work of fiction and publishes summer 2016.