Today I am interviewing Una McCormack, author of the new science-fiction novel, Weird Space: The Star of the Sea.

DJ: Hey Una! Thanks for stopping by to do this interview!

Una McCormack: Hi there! Thanks for asking me! For readers who don’t know me, I’m a science fiction writer based in Cambridge, UK, who mostly writes tie-in fiction based on shows such as Doctor Who and Star Trek. My first book for the Weird Space universe, The Baba Yaga, was my first non tie-in novel.

DJ: What is Weird Space: The Star of the Sea about?

Una: The book is an action-adventure space opera in which a group of characters band together to fight off the threat from some all-consuming, dimension-hopping aliens, while trying not to get arrested by their own government.

DJ: What were some of your influences for Weird Space: The Star of the Sea?

Una: The first couple of books in the Weird Space series, of course, which are by Eric Brown (Satan’s Reach and The Devil’s Nebula). I was also influenced by ensemble shows like Firefly and Blake’s 7, and by classic feminist SF by writers like Joanna Russ.

Una: The main characters are all struggling to protect themselves and their nearest and dearest from the threat from the Weird, who are Lovecraftian aliens intent on consuming everything in their path.

My main characters are Maria, a young mother who fled the Expansion after discovering a secret about a massacre carried out by her government. She’s inexperienced but brave, and she learns a lot about looking after herself and her little girl in this book.

There’s also Yale, who ran away from the Expansion some years ago for reasons that are made clear in the book. She’s been hiding away on a remote world called Stella Maris, where a Weird portal has opened, but hasn’t tried to destroy the locals. Yale is fast-talking, likes a fight, and is mostly out for herself – but she ends up having to return to the Expansion to fight the Weird.

The other main character is called Eileen O’Connor. She’s a scientist who comes to Stella Maris to learn more about this special portal, and who learns that her government have been guilty of terrible crimes. This makes her question which side she’s on.

DJ: What is the Weird Space universe for The Star of the Sea like?

Una: In the Weird Space universe, there are two main empires – a dystopian future Human civilization called the Expansion, and a civilization peopled by huge repulsive (to us!) aliens called the Vetch. These two empires have until recently been at war, but now they are united in the face of a common threat: the Weird. These are Lovecraftian aliens who can open portals into our dimension, and consume everything in their path.

Having these two species – Human and Vetch – trying to work together after a long war means there can be lots of stories about trying to build trust. And the Weird turn out to be more complicated than people originally thought.

DJ: What was your favorite part about writing Weird Space: The Star of the Sea?

Una: I had huge fun writing the character of Yale, who is a loner and likes to do things by herself. In the book she gets stuck in charge of two teenagers, which tries her patience mightily. I most enjoy writing dialogue, and that set-up allowed for lots of wisecracks and backchat.

Una: I hope they think the book is exciting, fun, and that they enjoy it!

DJ: What is your goal in writing Weird Space: The Star of the Sea? Is there a particular message or meaning you are hoping to get across to readers when it is finally told?

Una: I try not to put messages in my books as I think they’re a turn-off for the reader, and they don’t usually serve the storytelling well. All my books, to some extent, are about people banding together to try to make things better, and I think The Star of the Sea is about this too.

My goal is for the reader to have an entertaining read which doesn’t feel too superficial, and for them to care about the characters and what happens to them.

DJ: When I read, I love to collect quotes – whether it be because they’re funny, foodie, or have a personal meaning to me. Do you have any favorite quotes from Weird Space: The Star of the Sea that you can share with us?

Una: “I thought you were dead! But you’re not dead – you’re drunk!”

DJ: Now that Weird Space: The Star of the Sea is released, what is next for you?

Una: I’m just finishing up edits on my next novel, which is a Star Trek novel called Enigma Tales and which will be published by Simon and Schuster next year!

DJ: Before we go, what is that one thing you’d like readers to know about Weird Space: The Star of the Sea that we haven’t talked about yet?

Una: If you like plenty of female characters doing lots of different things, then The Star of the Sea is for you! But read The Baba Yaga first. Girls with guns! Female whiskey priests! Mums on the run! What’s not to like?

Uno: My pleasure! Thanks for asking!

*** Weird Space: The Star of the Sea is published by Abaddon Books and is available TODAY!!! *** 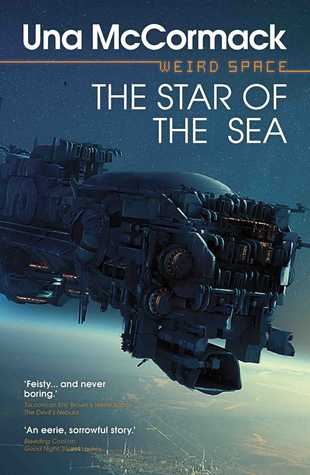 The incredible series about a corrupt, galactic human empire and the alien threat to our existence continues.

Its name is Stella Maris, the ‘star of the sea,’ a small world beyond the edge of the human Expansion, where a few men and women – Vetch and human alike – have made their homes. Fleeing persecution or oppression on their own worlds, here they have found peace and plenty, in communion with the otherworldly Weird.

A few weeks ago, that harmony was threatened, when Delia Walker came seeking hope for the future, hunted by her enemies in the Expansion, and went into the portal. Now, impossibly, her daughter has walked out, a grown woman, and demanded passage to the Expansion’s capital.

As more ships land on Stella Maris, bringing an end to the quiet obscurity the settlers have long cherished, a desperate race to carry Cassandra Walker to her destiny, and a resistance against those who would exploit Stella Maris for their own ends.

Una teaches writing at undergraduate and graduate level. Her background is in sociology, and she has taught organisational behaviour at Judge Business School, Cambridge, and Cambridge University Engineering Department.

Una is the author of several science fiction novels (including a New York Times Bestseller!), and numerous short stories in that genre. She is also a prolific fanfiction writer, setting up and organising a number of online writing groups and resources for fanfiction writers.

She lives in Cambridge with her partner, Matthew, her daughter, Verity, several daleks and no cats.