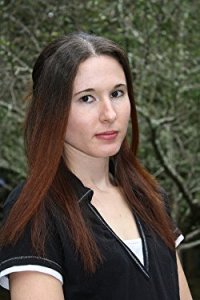 Today I am interviewing Michelle Lowe, author of the new steampunk, fantasy novel, Legacy, first book in the Legacy series].

DJ: Hey, Michelle! Thanks for stopping by to do this interview!

Michelle Lower: Hi, DJ! Thanks for having me. Well, for starters, I’m an author at Nordland Publishing. I have several novels out, such as The Warning, Atlantic Pyramid, Cherished Thief, children’s books, Poe’s Haunted House Tour and The Hex Hunt series. I keep myself busy raising two girls, writing and taking care of my seventeen year old cat, October. I’m a total nerd at heart who enjoys watching science fiction, fantasy, adventure and horror films. History piques my interests, especially European. Other interests include oil painting, arts & crafts and collecting knick-knacks. I love books and some graphic novels, and I’ll play old Atari games when given the chance. Listening to music is a must for me when reading, writing, or plotting evil deeds.

I’m a Georgia born native and had spent most of my life near Atlanta before pulling up stakes and moving clear across country to California with my husband, Ben.

DJ: What is Legacy about? 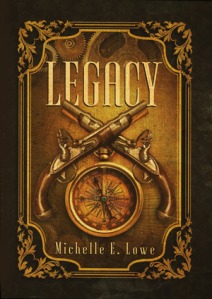 Michelle: As you mentioned, Legacy is the first of a six book series. It’s a rollicking adventure that takes place in the Victorian era, during the rise of the Industrial Revolution. It’s a mesh of both steampunk and fantasy with a cast of colorful characters within a plot that is fast-paced and original. Here’s a quick blurb.

A thief, a lover, and a toymaker; drawn together by fate, unlikely champions against a powerful and remorseless enemy. When not fighting each other, they must defeat the powerful Lord Norwich, and end his plan to unleash global violence and crown himself emperor of the world.

But behind the scenes, the Trickster god is manipulating men like puppets, changing history to his own ends and for his own amusement. As an ancient plan is set into motion, the trio are face with events they do not understand and may not survive.

DJ: What were some of your influences for Legacy?

Michelle: There’s a wonderful quote by author, Toni Morrison. “If there’s a book that you want to read, but it hasn’t been written yet, then you must write it.”

I guess all-in-all I write the type of stories I would like to read myself.

Michelle: Each main character in Legacy has his and hers agenda and story of their own that weaves within the entire novel. The main protagonist who we’ll see throughout the entire series is gypsy born Pierce Landcross, England’s most notorious thief. Pierce is intelligent and crafty, which is good for him, considering that he constantly gets into trouble. He’s also a bit of hick and is downright a proper smartass, which makes writing him loads of fun!

Michelle: It’s an alternate universe that almost appears like our own, but with more advance technologies that are gradually taking shape. All over this world, there’s a rumor about the peak of the Industrial Revolution, an era called, The Age of the Machine. This has gotten many builders and tinkers very excited and they let themselves become what’s known as Contributors to this upcoming age by creating and engineering new machines and gadgets.

DJ: Why did you choose Victorian England as the setting for this story?

Michelle: It just seemed right, I suppose. Not because it’s a steampunk story, but I wanted to use actual people in the Victorian era, like the British monarchy, who also play a vital role in the series. Also, Europe has many countries to use as settings and there’s a deep rich history just ripe for inspiration, which I’ve utilized in every book.

DJ: Is there any-type of magic in here, too?

Michelle: There is magic realism in the stories, yes. When I started Legacy, I had no real intent on having any sort of “magical elements” in it, but I wanted everything that happens in the series to have a purpose and give a reason why every event ties in with each other. Adding characters like the enchantress, Mother of Craft, and the Trickster, really helped pull the stories together.

DJ: What was your favorite part about writing Legacy?

Michelle: Writing the characters and getting to know them. The characters I create, I learn about them as I go. The more I write, the more I begin to understand who they are. It’s kind of strange how it all turns out in the end. They’re like actual people you’ve just met and get to know better the more time you spend with them.

Michelle: I’d hope they will be asking each other when the second book will be released! *Smirks.* Perhaps they’ll speculate what will happen in the series next. All-in-all, though, I hope they come away feeling a little more adventurous.

DJ: What was your goal when you began writing the Legacy series? Legacy is only the first book in the series, but is there a particular message or meaning you are hoping to get across when readers finish it?

Michelle: My goal was to craft out a story that was fun, exciting, and above all, meaningful. The characters in the Legacy series are very close knit. You’ll see how they protect one another in many ways and feel the potent emotions that each character goes through. In the midst of this world of upcoming machines and technologies, there are strong human elements that the readers will appreciate. On the whole, there is meaning that I’ve encrypted, and that is that every story has different adaptations to them. They start as one kind of story and soon begin to take on another form. When I was a kid, we played a game in school where a teacher whispered a short story to one of us in class and then that child whispered it to another kid and then that kid whispered it to another, and so on. By the time the tale reached the last student, it had turned into a completely different story. Sometimes a changing tale is perfectly innocent and safe, but other stories when told wrong can be dangerous.

DJ: When I read, I love to collect quotes – whether it be because they’re funny, foodie, or have a personal meaning to me. Do you have any favorite quotes from Legacy that you can share with us?

Michelle: “Freedom’s a state of mind, chum. Lose your mind and you lose everything.” —Pierce Landcross

DJ: Now that Legacy is released, what is next for you?

Michelle: Promoting the heck of it! *Laughs* It’s a lot tougher than writing, y’know. Pushing a novel up through the clutter of other books, trying to get notice. It’s a daunting task. The competition is vastly fierce and there are many authors out there who are better at it than I am. I’m still writing, though. I’m working on a standalone book for Legacy, titled Boom Time, and I’m also toying with the idea of writing a couple of screenplays. If the Legacy series does well, I’ll being writing the Age of the Machine series. I would like to see Legacy turned into an audio book, so starting a Kickstarter campaign to make that happen seems to be on the horizon for me as well.

DJ: Before we go, what is that one thing you’d like readers to know about Legacy that we haven’t talked about yet?

Michelle: Before the first Legacy novel was released, I’d spent a year and half writing out the other five books. Now it all boils down to editing each book. The reason I wanted to torture myself like that was to make absolute certain that this series would read the way I had intended and so not disappoint the readers by having any confusing outcomes or scenes. I’m sure George Lucas would take back Leia kissing her brother if he’d known that he was going to have Luke related to her. J

Michelle: I’d like to reach out to any aspiring writers out there. I once read that you can make anything by writing. And it’s true! Writing opens minds, introduces new perspectives and brings people into worlds they’d never knew existed before. Writing is an art form that is beautiful, tragic, complex, stunning and horrifying. My best advice is to develop thick skin, learn from constructive criticism and read! Read! Read! Read! Because when a writer is reading, it’s different than non-writers. We’re not just reading, we’re studying! We’re finding out new ways to describe things, broadening our vocabulary, and learning how these other authors thread their stories together. Whatever genre you write, reading will help significantly when you put your own pen to paper.

*** Legacy is published by Nordland Publishing and is available TODAY!!! *** 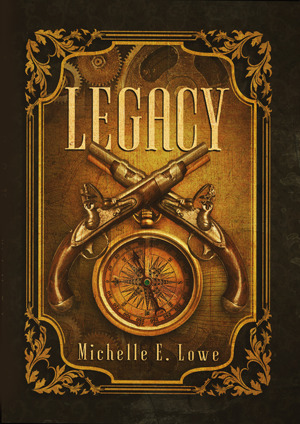 A thief, a lover and a toymaker; drawn together by fate, unlikely champions against a powerful and remorseless enemy. When not fighting each other, they must confront a powerful lord and end his plan to unleash global violence.

But behind the scenes, the immortal trickster is manipulating men like puppets, changing history for his own amusement. And as an ancient plan is set into motion, the trio is faced with events they do not understand and may not survive.

Legacy is the first of an epic new series that combines Fantasy and Steampunk in an unforgettable novel set in Victorian England.

Michelle E. Lowe is the author of The Warning, Atlantic Pyramid, Cherished Thief, and the Legacy series. Children’s books, Poe’s Haunted House Tour, and the three part adventure children’s series, The Hex Hunt. She is also a mother, wife, and painter. Her works in progress is the continuations of Legacy, which will be a six part steampunk/fantasy book series. Currently, she lives in Lake Forest, California.