DJ: Hey Hilary! Thanks for agreeing to do this interview!

Hilary Monahan: Why sure. I’m a New York Times bestselling author for my horror YA MARY: THE SUMMONING duology which is out with Disney Hyperion. I’m also Eva Darrows, and I wrote THE AWESOME for Rebellion to some critical acclaim and have DEAD LITTLE MEAN GIRL coming out with Harlequin Teen in March. I do romance, too, under a third name—Thea De Salle—and those books will be out with Simon and Schuster starting in February. Basically if it involves words, I probably write it.

DJ: What is Snake Eyes about?

Hilary: Women. It’s a love letter to women. Queer women and old women and strong women and fat women and thin women and any kind of woman you can think of. Also snakes. I’m terrified of snakes and what better way to wrestle that demon than to write an entire novel about them. It didn’t work, by the way–I’m still afraid of them–but at least I got a very cool Greek mythology UF out of the deal.

DJ: What were some of your influences for Snake Eyes?

Hilary: Mad Max: Fury Road for sure. I loved how the film featured female characters who are often reduced to supporting cast for male centered stories. Also that absolutely atrocious Clash of the Titans movie—the 1981 version (so the less atrocious of the two, sorry Hollywood.) For reasons I do not know, my grade school insisted on showing us that film annually. The artful Claymation of Medusa stuck with me, I guess.

Hilary: Tanis grew up an outsider. Even among the lamia, she was unfavored and rejected. When she strikes out on her own, she finally finds a place she belongs, and she fights for it. Tanis resonates with me because she’s a character who realizes early on that family is not always who you’re related to by blood, but who you choose to surround yourself with, and once you’ve settled on Your People, you protect them at all costs.

DJ: What is the world/universe/setting of Snake Eyes like?

Hilary: The Everglade wetlands in Florida. A while ago, I read an article about the python problems they’re having. People would get exotic snakes as pets, be ill-prepared for the snakes to grow enormous, so they’d go to the nearby swamp and release them. It’s hot and humid in Florida, so perfect breeding ground, and now the people there host annual python hunts because the pythons are reproducing at a rapid rate and upsetting an ecosystem they don’t belong in. When I decided to write about lamias and gorgons, I couldn’t think of a better place to put them.

DJ: Tell us more about the Gorgons and Lamina, please?

Hilary: Lamia was one of Zeus’s side ladies, had children with him at a Greek loveshack. Hera got jealous and struck out as she was wont to do, turning Lamia into a half snake woman with a gluttonous appetite. Lamia was so hungry, she devoured the children she’d had with Zeus.

The gorgons are the Medusa ladies—stone stares, snakes for head. There were three sisters total. The first two were immortals (Stheno and Euryale) but Medusa drew the short straw. Vulnerable, Perseus was able to cut off her head.

In the book, the remaining gorgons are angry with Lamia for a slight and have been for thousands of years. Lamia is and has been running from them, reproducing as quickly as possible to keep a small army of her daughters around her to protect her from the gorgon threat.

DJ: While Snake Eyes is the third book in the Gods & Monsters series, the previous two book were written by different authors… This brings up few questions: Firstly, do we need to be familiar with the series in order to read Snake Eyes?

Hilary: Nope. It’s totally stand alone, as are the other two books in the Gods & Monsters series. There are a few tips of the hat to the other books, but nothing that’ll leave the reader lost.

DJ: Secondly, how does Snake Eyes fit into the series and how is it writing in a universe shared with multiple authors?

Hilary: The cool thing is that I know Wendig and Blackmoore—they’re great guys I associate with on social media, so it was pretty neat to be invited into their playpen. It frankly didn’t feel any different writing SNAKE EYES than my other work because my book is a standalone, as are Chuck and Stephen’s. We could do what we wanted and as it was UF, there wasn’t any world building in terms of inventing stuff from the ground up.

DJ: What was your favorite part about writing Snake Eyes?

Hilary: The banter. I love me some banter, and Tanis and Naree and Tanis and Bernie had quite a bit of it. It was a way to lighten up all the dark I was throwing at the page.

DJ: What do you think readers will be talking about most once they finish SNAKE EYES?

Hilary: I hope it’s the story itself, but more realistically, the queerness of the novel will probably come up first. Tanis is a snake woman with hemipenes. She’s in a lesbian relationship. This isn’t stuff you encounter in mainstream UF so much because queer novels get roped off into their own section of the book store more often than not. For some, this might put a protag and a relationship front and center that they wouldn’t otherwise encounter.

DJ: What was your goal when you began writing Snake Eyes? Is there a particular message or meaning you are hoping to get across when readers finish it?

Hilary: Oh, the usual big feminist agenda stuff: women are capable and strong in all of their guises. They’re not as limited as we like to think. The moment a woman is elderly or disabled or pregnant, we slap a feeble label on her, and I wanted to blow the top right off of that.

DJ: When I read, I love to collect quotes – whether it be because they’re funny, foodie, or have a personal meaning to me. Do you have any favorite quotes from Snake Eyes that you can share with us?

“Tanis hunted The Great White Asshole at Floyd’s tavern on the corner of Birch and Promenade.”

It’s music to my ears. Probably because I’m a profane little monkey.

DJ: Now that Snake Eyes is released, what is next for you?

Hilary: Working on the romance series for S&S. The first comes out in February, the second April, the third June. After that, I’m eyeballing a gothic horror—Crimson Peak meets The House on Haunted Hill. I’m all over the place.

Hilary: I’m on Twitter ALL the time. It’s the best bet for communication, but if that doesn’t suit you, I have a Facebook author page you can poke me at and I write monthly fiction on Patreon. Feel free to reach out to me if you have questions!

DJ: Before we go, what is that one thing you’d like readers to know about Snake Eyes that we haven’t talked about yet?

Hilary: That Naree’s ode to cheese in a can was a direct result of me having a bad day and an empty can of cheese lying next to my desk. If you haven’t had the (dis)pleasure of Easy Cheese, I’ll spare you. It’s salty orange plastic.

AND YET, folks, AND YET. I have no shame.

*** Snake Eyes is published by Solaris and is available TODAY!!! *** 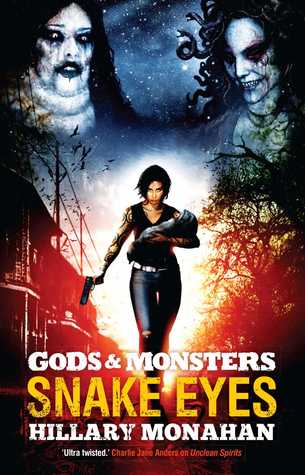 Florida’s Everglades: sleepy and backwoods, beautiful, dangerous… and home to an ages-old war between the Gorgons and the Lamia.

Tanis Barlas is, in no particular order, a daughter of Lamia, a snake-woman, a killer, and a hunter, collecting men to mate with her mother and continue the precious line. She hates it, like she hates her messed-up family and everything that goes with it.

But now Lamia’s favourite daughter has gone missing, and it’s down to Tanis to bring her back. She is dispatched to enemy territory – the snake-haired gorgons, whose turf stars at the edge of the swamp – to find her, starting a chain of events that will change every part of her life…

Hillary Monahan is a thirty-something word nerd doing her word nerd thing in scenic southeastern Massachusetts. Armed with a basset hound army and too many cups of coffee, she slants toward stories that will tickle the funny bone. She has been known to make creepy crawly words scuttle across the page, and is quite content vacillating wildly between giggling profanity and terrifying awfulness.