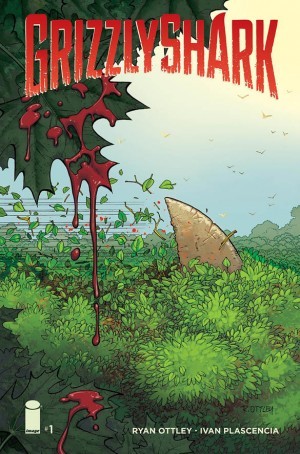 The sold out, cult hit blackand- white issue is back, now in full color! Followed by all-new issues that continue the bloody adventures of the world’s most feared animal, the Grizzly Shark!

If the title of the comic, the cover art, or its plot didn’t catch your interest, then just stop here. This comic will not be for you. However, if you are like me, and thought: what the heck? Then please, read on.

Pete and his son, Donnie, are out camping in the woods. Donnie goes to take a piss in the woods, but as he gets up, his father chucks a shotgun at him, telling him to be careful of sharks! Donnie mocks his dad saying there is no such things as sharks in the woods, and that that gun hurt his head and he’s now bleeding. Pete tells him he knows what he talking about, and that Uncle Carl and Jonbob are bringing in a specialist to catch it! Donnie is still “whatever” about the situation, but as he turns back a shark jumps out of the bushes and eat his lower half off…

When I first purchased this comic, when my comic shop guy came to it in my stack, he looked at it sand said to me, “Grizzly Shark… you goofy mother f\/cker.”

Personally, I am not a fan of the Sharknado movies, or many of the weird combo creature movies that SyFy makes (although, I do like the generic B-horror movies they come up with), but Grizzly Shark hit me in the right place.

It’s about a Shark in the woods; it’s like The Edge, but with a shark in stead of a grizzly. The humor is childish, stupid, and absurd, but it works. This comic is meant to be a ridiculous, over-the-top  joke, and it knows it, and it embraces it.

These people in the woods, are bunch of southern… well, to be honest, they be some southern rednecks XD We already have a shark in the woods, throwing the southerns as the main characters of the story (with their talk, and insert most of the redneck jokes you know), and it fits in perfectly. Their dialog and redneck humor is great, and having the plotcircle around the fact that they are hunting a shark in the woods made it all the more funny for me.

While the idea of the comic is stupid, the comic itself is far from it. It’s a silly and fun story, with goofy and funny characters, and hilarious dialogs and jokes. And these jokes are great, the art as well! Check out page 12 and page 23!

If Grizzly Shark sounds like your type of humor, then I think you’ll enjoy this, and have a blast reading it like I did!