DJ: Hey Elle! Thanks for agreeing to do this interview! For readers who aren’t familiar with you, could you tell us a little about yourself?

Elle Katharine White: Thanks for having me! I’m a reader, writer, obsessive drinker of tea, textbook introvert who occasionally likes to live outside of the stereotype, and professional maker-up of imaginary worlds.

DJ: What is Heartstone about? 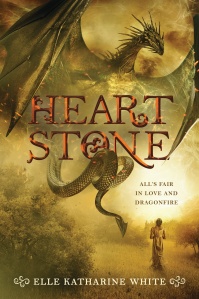 Elle: Heartstone answers the question “What would Pride and Prejudice look like in a fantasy world where Mr. Darcy rode dragons and hunted monsters for a living and Elizabeth was a healer with an eavesdropping problem?”

DJ: What were some of your influences for Heartstone?

Elle: Pride and Prejudice of course, and the movie How to Train Your Dragon. I was watching that when I first came up with the idea for a mash-up.

Elle: Aliza Bentaine, the main character, is a trained herbmaster and healer who, despite her skills, still can’t stomach the sight of blood. She’s also an artist, and always carries around a stick of charcoal and a scrap of paper in case an interesting subject happens across her path.

Alastair Daired, on the other hand, is color-blind, won’t leave the house with at least two weapons on him, and kills monsters for a living. He is the oldest child and heir to the ancient House Daired, the only dragon-riding family in the Kingdom of Arle. His sworn sister-in-arms is the dragon Ahla-Na-al Kanah-sha’an-Akarra (She-Whose-Wings-Bring-the-Tempest, in the human tongue). She goes by Akarra, and thinks her human takes himself way too seriously.

Elle: Riders are the warrior elite of Arle, an occupation usually passed down from parents to children and reserved for the oldest and wealthiest bloodlines. They are the only ones allowed to bond with and ride wyverns, bear-like beoryns or, in the Daireds’ case, dragons.

DJ: What is the world or setting of Heartstone?

Elle: Heartstone is set in the Kingdom of Arle, an island nation with a startling geographic resemblance to a country Ms. Austen would not find unfamiliar—with one important distinction. Arle has monsters. Non-human creatures collectively called the Oldkind nearly outnumber the people of Arle. Some kinds (dragons, wyverns, beoryns, hobgoblins, etc.) live in harmony with humans and call themselves Shani, or the friends of humankind. Some (centaurs, will-o’-the-wisps, merfolk and the like) don’t care either way and call themselves Idar, the indifferent. And some creatures like direwolves, lamias, gryphons, and banshees hate humans and hunt them for food, or sport, or both. They are called the Tekari, the foes of humans and Shani, and it is these creatures that the Riders are sworn to fight.

DJ: Heartstone has a gorgeous dragon on the cover, and I’m pretty sure there are also many of fantastical creatures too?

Elle: Yes, lots! You can get a sneak peek at some of them here: http://www.dragonridersofarle.com/bestiary

DJ: What was your favorite part about writing Heartstone?

Elle: Discovering fun ways for Aliza and the other main characters to interact with the non-human creatures. Especially the hobgoblins. I loved writing those little guys.

Elle: The adventure. The romance. Who can ship our main characters the hardest. (Just kidding, that title might have to stay with me!)

DJ: When I read, I love to collect quotes – whether it be because they’re funny, foodie, or have a personal meaning to me. Do you have any favorite quotes from Heartstone that you can share with us?

Elle: From Tobble the Hobgoblin to Alastair Daired, demonstrating the hobgoblins’ time-honored tradition of practical curses: “I hope you get hiccups for a month.”

Aliza: “Give me earth and growing things; you can keep the wind.”

DJ: Now that Heartstone is released, what is next for you?

DJ: Before we go, what is that one thing you’d like readers to know about Heartstone that we haven’t talked about yet?

Elle: As a bit of an inside joke, I threw in an homage to the 2005 movie adaptation of Pride and Prejudice in a scene toward the end of the book. 100 House points to the first person to find it!

*** Heartstone is published by Harper Voyager and is available TODAY!!! *** 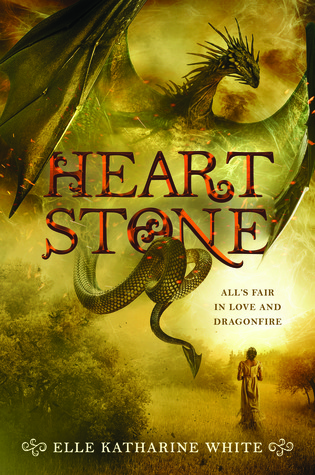 A debut historical fantasy that recasts Jane Austen’s beloved Pride & Prejudice in an imaginative world of wyverns, dragons, and the warriors who fight alongside them against the monsters that threaten the kingdom: gryphons, direwolves, lamias, banshees, and lindworms.

They say a Rider in possession of a good blade must be in want of a monster to slay—and Merybourne Manor has plenty of monsters.

Passionate, headstrong Aliza Bentaine knows this all too well; she’s already lost one sister to the invading gryphons. So when Lord Merybourne hires a band of Riders to hunt down the horde, Aliza is relieved her home will soon be safe again.

Her relief is short-lived. With the arrival of the haughty and handsome dragonrider, Alastair Daired, Aliza expects a battle; what she doesn’t expect is a romantic clash of wills, pitting words and wit against the pride of an ancient house. Nor does she anticipate the mystery that follows them from Merybourne Manor, its roots running deep as the foundations of the kingdom itself, where something old and dreadful slumbers . . . something far more sinister than gryphons.

It’s a war Aliza is ill-prepared to wage, on a battlefield she’s never known before: one spanning kingdoms, class lines, and the curious nature of her own heart.

Elle Katharine White infuses elements of Austen’s beloved novel with her own brand of magic, crafting a modern epic fantasy that conjures a familiar yet wondrously unique new world.

Elle was born and raised in Buffalo, NY, where she learned valuable life skills like how to clear a snowy driveway in under twenty minutes (a lot easier than you think) and how to cheer for the perennial underdog (a lot harder than you think)..

When she’s not writing she spends her time reading, drinking absurd amounts of tea, having strong feelings about fictional characters, and doing her best to live with no regrets.

Connect with her on Facebook at @ellewhite.author, or witness the hilarious spectacle that is a writer contending with the 140-character limit on Twitter at @elle_k_writes