Today I am interviewing Ellen Klages, Nebula and World Fantasy Award winner, and author of a new novella from tor.com, Passing Strange.

*Please note that this interview was originally done over Skype and was then transcribed and edit to what you are reading now. This was a spoken interview and thus does not necessarily represent the author’s prose.

DJ: Hey Ellen! Thanks for agreeing to do this interview!

DJ: What is Passing Strange about?

Ellen: Passing Strange is set in San Francisco in 1940. It’s about the cities within the city, and six women who are all unconventional is one way or another. It’s set in the bohemian parts of the city: in the only gay women’s bar in San Francisco, and in a nightclub in Chinatown. The “hidden parts” of the city.

It was inspired by pulps, noir, screwball comedies, and historicals, with a little bit of magic thrown in! Some people call it “genre-bending”, but I think it’s more “genre-blending”. Like a good stew — a little of this, a little of that.

DJ: What were some of your influences for Passing Strange?

Ellen: I moved to San Francisco right out of college from the Midwest where the cities are not nearly as interesting. Forty years ago, in 1977, I started writing a short story about women in a gay bar during the World’s Fair in 1939/1940. I wrote about four scenes, and never did anything with it. But it’s stuck with me and I’ve always wanted to tell that story.

I came back to it a couple years ago and did a bunch of research on the city of the time and the Worlds Fair, and kept getting more and more excited. So finally, after 40 years, I wrote the whole story.

Ellen: There are 6 women; the main characters are Emily Netterfield, who is just out of college. She moved from the East Coast to San Francisco; her family threw her out when they discovered she was gay.

Loretta Haskel is the cover illustrator for a pulp called Weird Menace that has leering fiends, chained women, and all that unsavory stuff.

Then there is Franny Travers, who is a cartographer, and possibly a witch. Her partner, Babs Weiss, is mathematician and teaches at the university; she’s not openly gay, because it would cost her her job.

And Helen Young, who is Asian and therefore can’t really get a decent job anywhere. She works as a dancer at a Chinese nightclub.

They’re ordinary women, trying to live their lives in a society in which their personal lives are against the law.

DJ: What is the world or setting for Passing Strange like?

Ellen: It’s our world, just 75 years ago. San Francisco, which even then was one of the more liberal cities in the country. The dominant culture is racist, sexist, homophobic, etc, which complicates the characters’ lives.

It’s just before World War II, and the readers knows this, but obviously the characters don’t. The rest of the world is at war, but the United States is not yet. It’s not our war. But the reader knows that it will become our war, and that this is our last year of innocence before the world changes again.

DJ: What was your favorite part about writing Passing Strange?

Ellen: I think my favorite part was doing the research. I just read, and read, and read, and I had Viewmaster reels of the World’s Fair so I could look at it in 3D. I went to the library and read newspapers and old magazines from the time.

At one point I had two computers open. One of them with Google Maps, trying to figure out what I’d be seeing if I was in a particular place on a particular. The other computer I had a picture of the World’s Fair at night in 1940. I was trying to do that Vulcan mind-meld using these two very futuristic technologies to try to imagine my self, sitting in this place, in San Francisco.

I sat in my house, using Google Maps and old photos to imagine I was two miles away and 75 years in the past, taking notes to to describe what it was I would have been seeing. That was just a hoot!

DJ: What do you think readers will be talking about most?

Ellen: I hope they talk about the fact that it’s a good story; that they like the writing, the characters, and that when they get to the end of it they are satisfied.

I really hope that it sticks with them so that a couple days later they go, “I wonder about that part,” or they want to go look up how much of it is real. Because the interesting thing about historical fiction is that my imaginary people walk around a very real setting; all the places the book are historically accurate and real. Maybe it will inspire some people to go look up a little bit of history, or maybe it will inspire them to go write something of their own. That’s always nice.

DJ: What was your goal when you began writing the Passing Strange? Is there a particular message or meaning you are hoping to get across to readers when they finish it? Or is there perhaps a certain theme to the story?

Ellen: Theme? Not really. Goal? I wanted to get it done by the deadline, which is always, always a writer’s goal.

I was thinking of the passing part as I was writing, but mostly I was exploring these women’s lives.

DJ: This may have skipped some reader’s attentions, but Passing Strange is actually a novella. It seems to me that novella is gaining a rise is popularity again: what is it about the novella format that you like?

Ellen: Well, the real reason it’s a novella is that I was asked to write for Tor.com’s novella program. A novella is anything under 40,000 words, and I actually think it’s a lovely length. The only other novella I’ve written was a story called Wakulla Springs with Andy Duncan.

A novella is a really lovely length to tell a complex story, all the way through, from beginning to end, and get into detail, but not have two or three stories going on at the same time. It doesn’t have plots and subplots the way a novel does.

I’m able to say what I wanted to say and have it be both satisfying and leaving the reader wondering — if there were 20 or 30 more pages — what might have happened.

DJ: When I read, I love to collect quotes – whether it be because they’re funny, foodie, or have a personal meaning to me. Do you have any favorite quotes from but Passing Strange that you can share with us?

Ellen: Here is a description from the very beginning:

“From the windows of her apartment high atop Nob Hill, San Francisco’s staggered terraces lay like a child’s blocks, stacked higgledy-piggledy, the setting sun turning glass and steel into orange neon, old stone and stucco walls glowing with a peach patina. The fog coiled though the hills like a white serpent.”

DJ: Now that Passing Strange is released, what is next for you?

Ellen: I am finishing up a new children’s book called Out of Left Field, coming out from Viking in 2018. It’s is about girls and baseball, set in 1957. It’s due the first of February, so I’m frantically working.

I also have a new short story collection coming out in May from Tachyon Publication that is nearly done, called Wicked Wonders. It will contain all of my short fiction from the last 10 years.

Then in February I think I’m going to nap!

DJ: Before we go, what is that one thing you’d like readers to know about Passing Strange that we haven’t talked about yet?

Ellen: Two things: One of them is that I think it’s the best things I’ve ever written to date. Hopefully with every new project I’m able to say that – but I’m particularly pleased with this one.

And it has the singularly most stunning cover I have ever been given. It’s a piece of art by Gregory Manchess, and the cover design is by Christine Foltzer. I’ve had lots of people say they just want to pick up the book because of the cover, and they don’t care what’s inside it. It’s a really stunning cover. So that a win-win.

Ellen: I have three readings coming up:

If Passing Strange sounds interesting, and people are within shouting distance of San Francisco or Portland, I hope they’ll come down and listen to me read some of it!

DJ: Thank you so much (again) for taking time out of your day to answer my questions!

*** Passing Strange is published by Tor.com and is available TODAY!!! *** 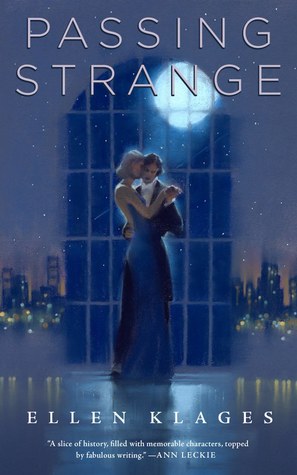 San Francisco in 1940 is a haven for the unconventional. Tourists flock to the cities within the city: the Magic City of the World’s Fair on an island created of artifice and illusion; the forbidden city of Chinatown, a separate, alien world of exotic food and nightclubs that offer “authentic” experiences, straight from the pages of the pulps; and the twilight world of forbidden love, where outcasts from conventional society can meet.

Six women find their lives as tangled with each other’s as they are with the city they call home. They discover love and danger on the borders where magic, science, and art intersect.

Inspired by the pulps, film noir, and screwball comedy, Passing Strange is a story as unusual and complex as San Francisco itself from World Fantasy Award winning author Ellen Klages.

ELLEN KLAGES is the author of two acclaimed historical novels: The Green Glass Sea, which won the Scott O’Dell Award, and the New Mexico Book Award; and White Sands, Red Menace, which won the California and New Mexico Book awards. Her story, “Basement Magic,” won a Nebula Award and “Wakulla Springs,” co-authored with Andy Duncan, was nominated for the Nebula, Hugo, and Locus awards, and won the World Fantasy Award for Best Novella. She lives in San Francisco, in a small house full of strange and wondrous things.