DJ: Hey Paul! Thanks for agreeing to do this interview!

Paul Crilley: I’m a Scottish writer adrift in South Africa. I’m a bit of a jack of all trades when it comes to writing. I’ve worked on kids novels, (my own Invisible Order series, as well as The Hardy Boys), computer games, (Star Wars: The Old Republic), comics, (X-files: Conspiracy), and television (too many shows to list)

DJ: What is Department Zero about?

Paul: It’s about multiverse theory and Cthulhu mythology. It’s also a portal fantasy, a buddy-cop type story, a story about a divorced dad trying to do right by his daughter, and it’s snarky.

The more formal pitch: Harry Priest is down and out. He’s in “biohazard remediation”, which is a fancy way of saying he cleans up crime scenes for a living. He’s divorced, and the highlight of his day is when he gets to say goodnight and read a bedtime story to his daughter. (Over the phone.)

Harry and his partner Jorge stumble onto what they think is just another crime scene at an old motel in Santa Monica, and when Jorge steals some evidence form the scene, Harry finds himself chased down by Vervet monkeys with the faces of old men (that quote Shakespeare at him), spider monsters that eat your brain, various creatures from the Cthulhu mythology, and of course, the acolytes of the Old Ones.

All this brings him into contact with Havelock Graves of the Interstitial Crime Department, an agency that polices the multiverse. The ICD works the infinite number of realities from their base in Wonderland and when Graves offers Harry a job Harry accepts. (Well, he has to. He got fired from his old job.)

Unfortunately for Harry, Graves, as well as being arrogant, loud, and over the top, is also a big fat liar. The kind whose pants are on fire. His team was demoted to Department Zero after the incident at the motel, Department Zero being the lowest department in the entire ICD.) And what does Department Zero do? They clean up crime scenes. Of the supernatural kind.

Graves wants to use Harry as bait to draw out the people that got him demoted, and this brings them into contact with a cult that worships Cthulhu and wants to free him from his prison in the Dreamlands. Cue lots of bickering, travel to alternate realities, battles, incredibly strategic and fast retreats, the Spear of Destiny, Robert E Howard-type fantasy worlds, and more bickering.

DJ: What were some of the H.P. Lovecraft influences for Department Zero?

Paul: It’s such a different book for me, I don’t think I was influenced in any particular way when it came to plot and style. But tonally, I wanted to capture the same half comedic/half crazy feeling of MiB and RIPD.

DJ: What are some of you favorite Lovecraft stories?

Paul: Well, you have to start with Dagon. That’s Lovecraft in a nutshell. Then The Color of Space, At the Mountains of Madness, The Whisperer in Darkness, and of course, The Call of Cthulhu.

Paul: The main Character, Harry Priest is at a low point in his life. He’s recently divorced, he lives in a rundown apartment in LA, he’s a wannabe scriptwriter who doesn’t have the discipline, and he works as a crime scene cleaner. All he wants from life is to be able to read stories to his daughter every night. It’s what gets him through the day. He’s drifting, not knowing what to do since his divorce. He knows he should be doing more, but he doesn’t know how.

Then there is Havelock Graves, an investigator for the Interstitial Crime Department. Graves is an arrogant, annoying, self-righteous old man, who is unfortunately usually able to back up his arrogance with his skills. He’s good at what he does. (Until Harry messes things up and they get demoted from the investigative unit to the DDICS. (The Disposal Department for Interstitial Crime Scenes.) Basically, he gets demoted to crime scene clean up for supernatural crimes, and Harry, having a bit of experience in the more mundane aspects of this job, is recruited by Graves.

DJ: What is the world or setting of Department Zero like?

Paul: The world of the story is the entire multiverse. Reality upon reality receding around us like reflections trapped between mirrors, looked upon by frozen Elder Gods who think of us as nothing more than parasitic bacteria.

DJ: What was your favorite part about writing Department Zero?

Paul: I always like creating two characters who bounce off each other. That Pulp Fiction, Kiss Kiss Bang Bang feeling of creating fun banter that still pushes the story forward. That’s always my favorite. But having said that, the fantasy section was also great fun. When I first started out writing I always saw myself as becoming a fantasy novelist. It was all I read. And that section of the book was a chance for me to scratch that itch. Who knows, I might still try that fantasy series someday.

Paul: I honestly don’t know. I’m kind of curious about that myself. There’s so much in there, I think every reader will have something they like and something they think is just bizarre.

DJ: What was your goal when you began writing Department Zero? Is there a particular message or meaning you are hoping to get across when readers finish it? Or is there perhaps a certain theme to the story?

Paul: I started writing Department Zero directly after writing Poison City. Poison City is a dark, heavy book, dealing with religion and loss. Nothing wrong with that. It’s the story I wanted to write and I loved doing it. But after Poison City, I wanted to do something lighter.

DJ: When I read, I love to collect quotes – whether it be because they’re funny, foodie, or have a personal meaning to me. Do you have any favorite quotes from Department Zero that you can share with us?

Paul: I quite like the opening of a chapter when they go to an alternate London, where the War of the Worlds actually happened.

So here’s the thing. When I set off after the guy who stole the spear, I really didn’t expect to end the night chained to an altar in the ruins of St. Paul’s Cathedral while my blood is sucked from my body by a group of insane (and unfit) cultists frantically working foot pumps in an attempt to bring the rotting corpse of a Martian invader back to life.

But them’s the breaks, honey.

And the opening of the book:

The polite term for what I do for a living is “biohazard remediation”.

That’s what I say if anyone asks me at a dinner party. Not that I’m ever invited to dinner parties. (Megan got custody of all the friends in the divorce.) But it’s what I’d say if I was invited, and if someone was actually polite enough to approach through the chemical smell of industrial-strength cleaning products that clings to my body

Another term for what I do is Crime and Trauma Scene Decontamination. Or CTSDecon, if you want to sound cool.

Which, basically, means that I clean up stiffs for a living.

All the stiffs. No prejudice in my line of work.

Spontaneous human combustion? Check. (Not that I’ve ever had one of those, but I live in hope.)

DJ: Now that Department Zero is released, what is next for you?

Paul: I’m currently working on the sequel to Poison City, which is called Clockwork City.

DJ: Before we go, what is that one thing you’d like readers to know about Department Zero that we haven’t talked about yet?

Paul: That there’s a lot in there. It won’t be to everyone’s taste, but if you like crazy, cosmic, comedy/horror mashups, then it might be your cup of tea.

Paul: A pleasure. Thanks for having me.

*** Department Zero is published by Pyr and is available TODAY!!! *** 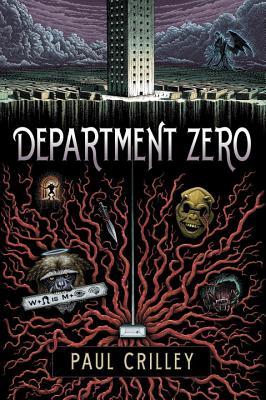 THE END OF THE UNIVERSE IS ONLY A HOP, SKIP, AND SLIGHT STUMBLE-THROUGH-A-WORMHOLE AWAY

Harry Priest just wants to make sure his ex-wife doesn’t take away his visitation rights, and his dead-end job cleaning up crime scenes for the past ten years isn’t doing him any favors.

But when Harry attends what he thinks is a routine death, he stumbles onto a secret multiverse of alternate realities all reachable through universe-hopping gates. Policing these worlds is Havelock Graves, the Interstitial Crime Department’s top agent for ten years running (according to him). When Harry accidentally messes with the ICD crime scene, Graves and his team are demoted as low as they can go: Department Zero. They’re recruiting Harry too—not because he charmed them, but because he just might hold the key to saving the universe…and getting their old jobs back.

To do this, Graves and his team set out to solve the crime that lost them their jobs. A crime that involves a cult planning to hunt down and steal the fabled Spear of Destiny in order to free the Great Old One Cthulhu from his endless sleep in the Dreamlands. (Because that’s another thing Harry soon finds out. Everything H. P. Lovecraft wrote is true. Like, everything.)

The team will have to fight its way through realities filled with Martian technology and evade mad priests (Harry’s favorite kind) in a realm of floating landmasses where magic really exists.

And Harry has to do it all in time to say good night to his daughter.

Paul Crilley is a Scotsman adrift in South Africa and has been writing professionally for the past 17 years. In that time he has worked on over thirteen television shows, one of which was nominated for an international Emmy award.

He has worked with Fox Television, written ten novels, worked on five computer games, and is currently making his way in the comic book field. (He conceptualized the entire story and wrote three issues of the six issue comic book mini-series, X-Files: Conspiracy, where he had to come up with a story that brought The Transformers, Ghostbusters, The Teenage Mutant Ninja Turtles, and The Crow into one coherent story.

He recently completed an X-Files novella and a Hardy Boys novel and has just finished the first in an urban fantasy series set in Durban, South Africa called Delphic Division: Poison City. His novels can be found here: http://www.amazon.com/Paul-Crilley/e/B001JRRIMG

Highlights of his career so far are working with Lucasarts and Bioware as a freelance writer on the bestselling, award-winning computer game, Star Wars: The Old Republic, winning the SCRIBE award for Best Gaming Related Novel for his first book, Night of the Long Shadows, and having his most recent novel, The Osiris Curse, voted amongst the top twenty five books of the year by the Voice of Young Adult Magazine.

He also writes the horror/comedy book series My Zombie Hamster under the pseudonym, Havelock McCreely.