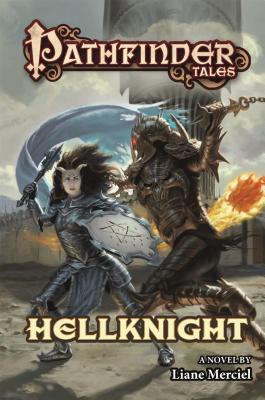 Do I want to read more Pathfinder Tales? HELL YES.

Paizo Publishing is the award-winning publisher of fantasy role playing games, accessories, and board games. Pathfinder Tales: Hellknight is the latest in their popular novel series.

The Hellknights are a brutal organization of warriors dedicated to maintaining law and order at any cost. For devil-blooded Jheraal, even the harshest methods are justified if it means building a better world for her daughter. Yet when a serial killer starts targeting hellspawn like Jheraal and her child, Jheraal has no choice but to use all her cunning and ruthlessness in order to defeat an ancient enemy to whom even death is no deterrent.

*Discalimer: I received an review copy of this book from the publisher in exchange for my honest opinion and review.

Do I play the Pathfinder Roleplaying Game? No. Do I know what Pathfinder is? I’d heard of it. Do I play any RPG’s? No. Did I enjoy this book? YES. Do I want to read more Pathfinder Tales? HELL YES.

Jheraal is a Hellknight who given the case to investigate the “murder” of three youth hellspawn. Actually, it’s note a true murder. While their hears have been removed, they are still alive; breathing air and pumping blood. Jheraal must find out who committed this heinous crime, why they are doing, and how it is possible.

Edderas is the oldest son of House Celverian, and has received a letter from his father that he must return home at once – his younger brother, Othando, has been murdered. Why anyone would want to murder Othando, a scholar and non-confrontational man who was liked by all, and heir to a House that was barely even mentionable, is beyond Othando, but someone must have a had a reason to do it.

As Jheraal searches for the hellspawn murderer, and Edderas for his brother’s, their path will collide and soon they will find themselves in the company of a diabolist, Velenne, who has a history with Edderas, who will help them their on their search for the killers, and all three will end up in a location that none of them expected…

Outside of Pathfinder being a role-playing game, I knew nothing, absolutely nothing, about Pathfinder. But after reading novel, I want to read all of the books just so I can see more of this world! In my opinion, as someone who is not familiar with the already established Pathfinder game, everything was new to me, and this world-building was by-far its greatest strength.

If you are already playing the Pathfinder games, I am afraid that I cannot comment on how Hellknight compares to the RPG; I can only assume that you would like it. I mean, who like to read stories (that are officially sanctioned) that are set in the same world that of a game that they play?

As for the story itself. I thought it was pretty good. This is a fantasy story (obviously) but Liane’s writing also brings has a great touch of horror to it too, that I was not expecting. That horror style of writing for the demons and creatures and events in the world made a huge difference for me. Because without it, I don’t see this being as a good a story.

What I was most surprised about was how much of a murder-mystery this story was. From the back cover it is very evident that they will be searching for a murderer (duh), but I didn’t think the main genre would be murder-mystery. To me, that what type of story I was reading. The only difference was, that it was taking place in a fascinating world that was completely new to me.

I don’t know what other types of stories the rest of the Pathfinder Tale contain, but even if they were all murder-mystery I would still keep reading solely off of the fact that I want to learn as much as possible about the Pathfinder World.