Today I am interviewing S.C. Stokes, author of the new fantasy novel, When the Gods War, sequel to A Coronation of Kings.

DJ: Hey Sam! Thanks for agreeing to do this interview!

S.C. Stokes: Hey DJ, thanks for the invite. I’m a relatively new Author, When The Gods War is my second novel with many more still to come! I live in Brisbane Australia. I love to read, write and live Fantasy. I participate in a Live Action Role Play group where I don armour and sword and do battle on a regular basis. I just love the Fantasy genre and everything that comes with it. 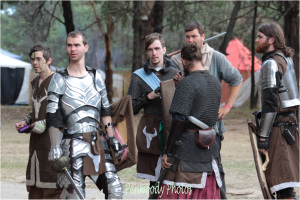 (I’m the chap in silver on the left)

DJ: What is When the Gods War about?

S.C.: When The Gods War is a struggle of survival for the people of Andara. Yaneera Empress of Andara, inherits an empire in the grip of famine. Determined and desperate Yaneera fights to save her people.

With her neighbours combining against her Yaneera is faced with a new threat.

Jonas, Disciple of the God Mythos appears in her court. In one hand he offers salvation from the famine and drought afflicting the land, but with the other he requires a price. One that Yaneera may not wish to pay.

As rival Gods fight for supremacy, Yaneera and her people are swept into a conflict where the stakes are victory or death.

DJ: What were some of your influences for When the Gods War?

S.C.: Life was my inspiration for this novel. I think that the laboratory of life finds all of us thrust into circumstances (often beyond our control). On the uncertain playing field of life, each of us battle daily to improve our circumstances, find happiness or some days just keep our heads above water.

I tried to draw on that concept when writing this book. When The Gods War is less about who is Good/Bad etc but more a story of many kingdoms and people each trying to succeed in an uncertain world.

S.C.: Yaneera – She is young and clever and applies those gifts to try and survive the turbulent politics of her Empire. At her heart is a desire to help her people. I think her struggle will resonate with a lot of readers.

Syrion Listar – Is one of the central figures of my series. He has an affinity with magic and is a member of the Astarii (a race of humans, who have been given great gifts to aid them in helping and protecting the worlds they watch over as Guardians). Syrion’s particular gift is the ability to shape shift into a Golden Dragon. My readers tell me they enjoy these scenes tremendously. I have to say I enjoy them too.

DJ: What is the world Meldinar for When the Gods War like?

S.C.: When The Gods War is set on the large island continent of Sevalorn on the world of Meldinar (The main world in my series, though there are others).

Sevalorn is a diverse land with many inhabitants. There are several human empires/kingdoms inhabiting the continent. There are also a race of Dwarves, a group of fey creatures known as the Diadri and the savage Kairon (a carnivorous race of centaur like creatures).

Many of the Kingdoms worship a being known as the Allfather. Thus when Jonas arrives as a servant of a rival God, and begins to attempt to usurp the Allfather’s influence, it thrusts the land into conflict.

DJ: What was your favorite part about writing When the Gods War?

S.C.: I write action packed novels and When The Gods War is no exception. The final battle scene is a particularly impressive and grand spectacle.

S.C.: What comes next. There is no cliffhanger in When The Gods War, the adventure starts and concludes in a single novel, but it clearly lays the groundwork for a larger conflict now unfolding in the universe. It offers several exciting teases of things which are yet to come.

DJ: What was your goal when you began writing When the Gods War? Is there a particular message or meaning you are hoping to get across when readers finish it? Or is there perhaps a certain theme to the story?

S.C.: Don’t give up. Life can be tremendously difficult at times, the path before you may not be clear at times. Forge ahead and have faith that tomorrow can be better than today.

DJ: When I read, I love to collect quotes – whether it be because they’re funny, foodie, or have a personal meaning to me. Do you have any favorite quotes from When the Gods War that you can share with us?

S.C.: “After a millenia you would think we would have crafted a more comfortable chair.” Tharadin Ironheart – King of the Dwarves

DJ: Now that When the Gods War is released, what is next for you?

DJ: Before we go, what is that one thing you’d like readers to know about When the Gods War that we haven’t talked about yet?

S.C.: Thanks DJ I appreciate your time.

Yaneera is the youngest Empress in the history of Andara. With her land in turmoil, she must use her wit and cunning just to stay alive. Severe drought has brought with it famine, starvation and death. As her people waver on the verge of open rebellion, Yaneera must deliver them or perish at their hand.

As chaos erupts across the land a stranger appears in the Empress’ court. Preaching the presence of a new God, Mythos, the newcomer promises deliverance for Yaneera and her people.

Mythos power is not without price, and Yaneera soon finds herself facing a crisis of conscience. . .

Will she sell her soul to save her people?

If you enjoy action-packed adventure and frantic fantasy you will love S.C. Stokes’ When The Gods War. Grab your copy and enter this exciting new world today.

When the Gods War is the exciting sequel to A Coronation of Kings. It can be read as a stand-alone novel or as book two in the Chronicles of Meldinar Series.

Many people love to read a great fantasy book. I love to live it! When I am not glued to my keyboard busily writing my next work, I can be found clad head to foot in armor, LARPing like a mad man. For those not familiar with the notion, LARP stands for Live Action Role Play where people get in costume and armor and fight over real life battlefields. It’s action packed and amazing, which is exactly how I like to write.

In my work you will find yourself submerged in thrilling new fantasy worlds. Each coursing with conflict that transpires at an incredible pace. I draw on experiences from my life and time spent living in Australia, The U.S.A and Japan to enrich the narrative of my books and provide you a taste of familiarity, as you plunge headlong into a scintillating new world.

If you enjoy my work, and I very much hope you will. Please take the time to connect with me via Amazon, Facebook or my website (www.samuelcstokes.com). I’d love to hear what you have to say.