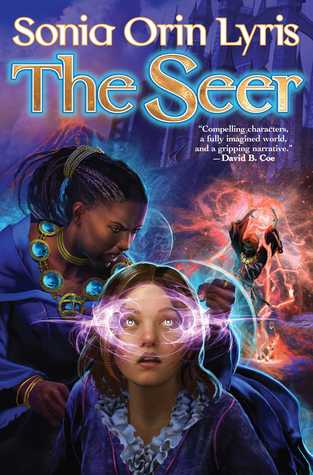 The Seer by Sonia Orin Lyris

The Seer is a masterpiece of Epic Fantasy in the vein of The Game of Thrones.

The Arunkel Empire has stood a thousand years, forged by wealth and conquest, but now rebellion is stirring on the borders and treachery brews in the palace halls. Elsewhere, in a remote mountain village, a young mother sells the prophesies of her sister, Amarta, in order to keep them and her infant child from starving. It’s a dangerous game when such revelations draw suspicion and mistrust as often as they earn coin.

Yet Amarta’s visions are true. And often not at all what the seeker wishes to hear.

Now in a tapestry of loyalty, intrigue, magic, and gold, Amarta has become the key to a ruler’s ambitions. But is she nothing beyond a tool? As Amarta comes into her own as a seer, she realizes she must do more than predict the future. She must create it.

Amarta can see the future, but nothing is certain, everything changes, and a man made powerful by her own talent will stop at nothing to have her power for his own—or for none at all.

Innel is a man raised in the King’s Cohort, raised to fight, raised to command; raised for one to become the Royal Consort to the princess. With nothing to lose, everything to gain, he juggles plots and pulls strings to achieve what no one else could… But he has a secret, one that can not be known.

In the empire of Arunkel, held together by an iron fist—an iron fist made up of many fingers, each with their own goals—Innel must step wary, lest all that he has fought for comes to naught; and in the midst be crushed by it all, Arunkel falling into deep and terrible war. Rife with political intrigue, awash in gray, every player playing their own game, nothing is certain.

Fabulous characters, exquisite pacing and tight prose, The Seer is a masterpiece of Epic Fantasy in the vein of The Game of Thrones. Watching Amarta develop her ability was a delight, even as she slid away from understanding, pummeled under the complexity and enormity of her power.

And I haven’t even mentioned the assassin or the mage! This is a big book, with four main characters, multiple prominent side characters and many moving pieces. I never felt the same kind of close connection for the characters of the Houses (like I did in Game of Thrones), but the others more than made up for any lack.

The attention to detail and deep research are gloriously evident, with a long history to the land, full of conflict, full of greatness. Mysteries abound for tomorrow, for the future, though Lyris wraps up the novel  and various strands with aplomb. One knows there will be more to come, simply, and quite obviously by the breadth of the world she has created. To not delve back in, to not further explore would seem tantamount to heresy.

5 stars for an unexpected jewel that stands as tall as the best.

One thought on “Book Review: The Seer by Sonia Orin Lyris”