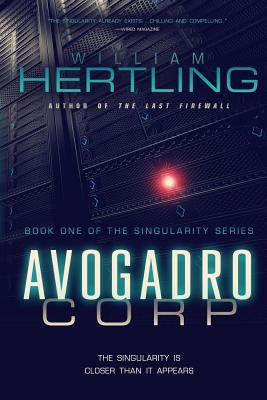 The Seer (Singularity #1) by William Hertling

Avogadro Corp is a diabolically clever insight into accidental A.I.

David Ryan is the designer of ELOPe, an email language optimization program, that if successful, will make his career. But when the project is suddenly in danger of being canceled, David embeds a hidden directive in the software accidentally creating a runaway artificial intelligence.

David and his team are initially thrilled when the project is allocated extra servers and programmers. But excitement turns to fear as the team realizes that they are being manipulated by an A.I. who is redirecting corporate funds, reassigning personnel and arming itself in pursuit of its own agenda.

*Avogadro Corp is a diabolically clever insight into accidental A.I.*

Effective Communication is everything. And despite spellcheckers, grammar checkers and auto-correct, there is not yet a way to automatically improve the appeal of your message to a recipient. There is not yet an algorithm to reword your message; to step past questions, step past doubt, to achieve an ends, to coerce with uncannily perceptive persuasion.

So what happens when an email algorithm to help human collaboration, takes on a mind of its own; goes beyond its purview and skips past every check and balance in its way?

Avogadro Corp is a diabolically clever insight into accidental A.I.; and a very real warning in an increasingly digital world where we rely on electronic communication for everything from finance to job prospects, from corporate commands to governmental orders.

Hertling deftly maneuvers through a complex scenario where human greed and desperation manifest an unchecked algorithm that grows at an exponential rate, stopping at nothing to build itself larger, to amass more data, growing in power and ability as the unthinkable starts to unfold.

With a fascinating idea, this story pulled me through, despite sometimes slow pacing, and awkward dialogue. The idea made up for it, and I am intent to read more.