DJ: Hey Steve! Thanks for agreeing to do this interview!

Steve Rasnic Tem: I’ve been publishing professionally since the early 80’s. In that time I’ve published over 400 short stories, 10 collections, 6 novels, and a large number of poems, articles, essays, plays, etc. I’m a past winner of the Bram Stoker, World Fantasy, British Fantasy, and International Horror Guild awards. Most of what I’ve learned about writing over the years will be collected soon in Yours to Tell: Dialogues on the Art and Practice of Writing (Apex Publications), the last project I completed with my late wife Melanie.

DJ: What is UBO about?

Steve: At its heart, UBO is a meditation on violence. A blend of science fiction and horror, the novel utilizes such historical viewpoint characters as Stalin, Himmler, Charles Whitman, Jack the Ripper, and Gilles de Raiis to explore humanity’s propensity for violent acts. Every resident of this prison located in a future Boston ravaged by riots and climate change has a similar memory of the journey to Ubo: a dream of dry, chitinous wings crossing the moon, the gigantic insects dropping swiftly over the houses of the neighborhood, passing through walls and windows as if by magic. Once there they are watched over by alien creatures who resemble giant roaches, and each day these roaches force them to relive the memories of some of history’s most violent figures. It’s a dark journey, but also an exploration of the things which make us human, with a ray of hope at the end.

DJ: What were some of your influences for UBO?

Steve: I can’t say that I’ve ever encountered another novel quite like it, but I’ve certainly learned from other writers how to handle unpleasant or violent content in a work of art so that it is still palatable, so that an average reader can make it all the way to the end. In fact a lot of novels dealing with violence that I read in college and after prepared me to write this book. A novel like Blood Meridian, from Cormac McCarthy, was certainly instructive to read. Dalton Trumbo’s Johnny Got His Gun was another important influence. I’d also mention Nathaniel West’s Day of the Locusts, Elie Wiesel’s Night, Thomas Harris’s Red Dragon, Burgess’s Clockwork Orange, Kafka’s The Trial and The Castle, and many others.

Steve: Daniel is the primary viewpoint character in the book, and we see most of the narrative through his eyes. Even when we’re in the viewpoint of Stalin or Jack the Ripper or any of the other historical figures in the book, it is through the filter of Daniel’s consciousness as he is forced to relive their memories. Daniel is imperfect, but he tries his best. He was ripped out of his life with his wife and young son and taken to Ubo against his will. His major concern is what must be happening to them in his absence, and how can he get back to them.

DJ: What is the world or setting of UBO like?

Steve: The historical scenarios Daniel is forced to endure occur over a wide range of times and settings: Victorian London, Nazi Germany, the suburbs of Moscow in the early fifties, Vietnam during the war, the University of Texas at Austin in the mid-sixties, etc. Ubo itself is a crumbling structure out in Boston harbor at some undisclosed point in the future. Much of Boston itself is in ruins. Daniel and the other residents aren’t even sure what this structure they’re kept in is or was: a factory, a hospital, a prison? But most of them would probably say it was a pretty good stand-in for Hell.

DJ: There are many different definitions of horror in genre, so I’m curious, when you write “horror”, how is it that you try to scare your readers? Do for gore? Shock? Maybe build in tense moments? Or perhaps is the unknown?

Steve: I’ve written horror of all types during my career. The majority of it has been of the “quiet” or “suggestive” variety—one of the ways I learned my craft was reading numerous collections of early 2oth century ghost stories—James, Burrage, Benson, Wakefield, and the like, and Ramsey Campbell has been an important influence. But I’ve written in-your-face, graphic, non-supernatural horror as well, much of it collected in my “noirish” collection Ugly Behavior. UBO combines a variety of these techniques in order to tell its story. The historical bits are factual, and so are appropriately specific and descriptive. But the book also employs the mood-setting and tension-creating techniques I learned from reading early supernatural fiction.

DJ: What was your favorite part about writing UBO?

Steve: The most satisfying part was probably when I finally took all this material I’d been researching for years—numerous books and file folders full of notes—and laid it all out on a long table and started reshuffling, removing, and creating separate piles that corresponded to each chapter—in a sense creating a physical outline of the book which I could then transfer to paper. At that point I could finally see the whole storyline, and for the first time I knew I could actually finish the novel

Steve: Well, some of them will probably be wondering how I sleep at night. Hopefully some will be surprised, and will have learned a few new things. Hopefully the book will make them think.

DJ: What was your goal when you began writing UBO? Is there a particular message or meaning you are hoping to get across when readers finish it? Or is there perhaps a certain theme to the story?

Steve: It’s a meditation on violence, in all its varieties. Humanity’s violence—and particularly male violence—disturbs me far more than anything else. I didn’t think the book would solve anything, or uncover causal relationships no one had ever thought of before—I’m a writer of fiction, not a social scientist. But I hope it will encourage readers to ponder some of the dynamics involved when human beings are violent with one another.

DJ: When I read, I love to collect quotes – whether it be because they’re funny, foodie, or have a personal meaning to me. Do you have any favorite quotes from UBO that you can share with us?

Steve: Here’s a few scattered from around the book:

“We live in Hell but we aspire to Heaven—that’s the drama of being human. The disparity makes us troubled, even insane at times.”

“High drama, excitement, was everything to the human organism. If not love, then cruelty. If not goodness, then evil.”

“They don’t teach you about the nights and what to do when you’re ass-deep in the dark.”

“No one would deny your right to survive. But everyone defines survival differently. For some it becomes an excuse for doing evil.”

DJ: Now that UBO is released, what is next for you? 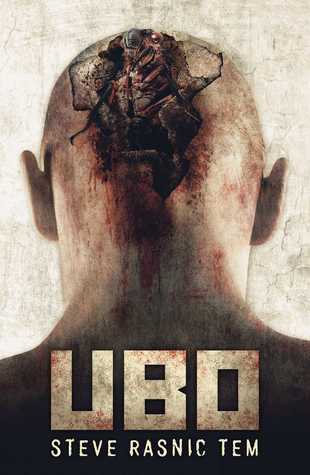 A blend of science fiction and horror, award-winning author Steve Rasnic Tem’s new novel is a chilling story exploring the roots of violence and its effect on a possible future.

Daniel is trapped in Ubo. He has no idea how long he has been imprisoned there by the roaches.

Every resident has a similar memory of the journey to Ubo: a dream of dry, chitinous wings crossing the moon, the gigantic insects dropping swiftly over the houses of the neighborhood, passing through walls and windows as if by magic, or science.  The creatures, like a deck of baroquely ornamented cards, fanning themselves from one hidden world into the next.

And now each day they force Daniel to play a different figure from humanity’s violent history, from a frenzied Jack the Ripper to a stumbling and confused Stalin to a self-proclaimed god executing survivors atop the ruins of the world. The scenarios mutate day after day in this camp somewhere beyond the rules of time. As skies burn and prisoners go mad, identities dissolve as the experiments evolve, and no one can foretell their mysterious end.

Steve Rasnic Tem was born in Lee County Virginia in the heart of Appalachia. He is the author of over 350 published short stories and is a past winner of the Bram Stoker, International Horror Guild, British Fantasy, and World Fantasy Awards. His story collections include City Fishing, The Far Side of the Lake, and In Concert (with wife Melanie Tem). Forthcoming collections include Ugly Behavior (crime) and Celestial Inventories (contemporary fantasy). An audio collection, Invisible, is also available. His novels include Excavation, The Book of Days, Daughters, The Man In The Ceiling (with Melanie Tem), and the recent Deadfall Hotel. In this Edward Gorey-esque, Mervyn Peak-esque novel a widower takes the job of manager at a remote hotel where the guests are not quite like you and me, accompanied by his daughter and the ghost of his wife–“a literary exploration of the roots of horror in the collective unconscious.”

You may visit the Tem home on the web at www.m-s-tem.com.