Today I am interviewing Kameron Hurley, author of the new space opera, The Stars Are Legion.

DJ: Hey Kameron! Thanks for agreeing to do this interview!

Kameron Hurley: I’m a fantasy and science fiction writer, but I’m probably best known for an essay that won a Hugo Award. That essay is “We Have Always Fought,” and it’s part of a collection that came out last year called The Geek Feminist Revolution. I also write a lot of fantastic worlds. I’ve got an epic fantasy series about polyamorous matriarchies and parallel universes colliding, which starts with The Mirror Empire, and an SF-noir bugpunk series, the God’s War Trilogy. I’m known for writing wild, cool worlds inhabited by badass women.

DJ: What is The Stars Are Legion about?

Kameron: It’s a space opera set among a legion of organic starships where two women struggle to escape a perpetual war and literally save their worlds. It’s a living, breathing adventure novel that a lot of folks have said is… very visceral!

DJ: What were some of your influences for The Stars Are Legion?

Kameron: I enjoy really weird fiction, that gooey, body horror stuff where people transform into who-knows-what, like China Mieville’s Perdido Street Station and KJ Bishop’s The Etched City. I also love space opera, though my influences in that vein are films as opposed to novels. There are fewer novels that do gooey spaceships. I watched a lot of Pandorum, Farscape, Babylon 5, and some really weird stuff I can’t remember. I also spent a lot of time researching microbes, parasites, and symbiotic creatures and ecosystems. I wanted these worldships to be living ecosystems, and for the humans inside of them to be part of those systems.

Kameron: There are two viewpoint characters, Zan and Jayd. What I love about Zan is her determination to become the person she wants to be, completely unshackled from her past. What I like about Jayd is her perseverance, her grim determination in the face of all odds. Once she sets a goal, she’s will to do whatever she needs to do to achieve it.

DJ: What is the world or setting of The Stars Are Legion like?

Kameron: The Legion is a loose collection of starships orbiting an artificial sun, which is hurtling through deep space. The Legion is dying, and those who survive have had to carve off bits of other worlds and scavenged from them in order to survive. Clearly this situation isn’t sustainable, so our narrators are in the process of figuring out how to save the Legion.

DJ: What was your favorite part about writing The Stars Are Legion?

Kameron: I loved writing the middle section of the book, which is the exploration of the heart of the world itself as Zan fights her way back to the surface. I loved reading science fiction as a kid because of this sense of wonder, this sense where you’re exploring a strange and wonderful place, and I got to do that with the middle section of the book especially. I loved creating the ecosystems on every level of the ship, the different societies. That’s the fun part, for me.

Kameron: So far everyone seems to be talking about just how gooey and visceral the worlds are. They really are living things. They even have heartbeats. Carving one’s way through a living being while fighting your way back to the surface is a pretty gory journey. That said, it does have a hopeful ending, which I don’t think is a spoiler to say. We need more hopeful futures right now.

DJ: Before we go, what is that one thing you’d like readers to know about The Stars Are Legion that we haven’t talked about yet?

Kameron: I suppose I forgot to mention that the people of the Legion are all women. There’s a very good reason for that, and I think it may change how you read other space operas in the future.

*** The Stars Are Legion is published by Saga Press and is available TODAY!!! *** 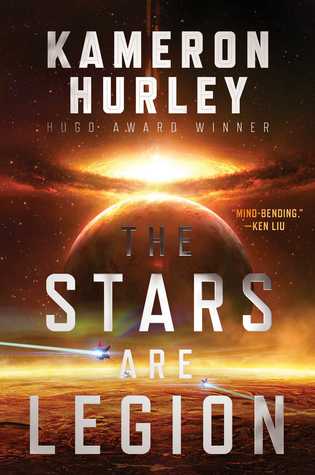 Somewhere on the outer rim of the universe, a mass of decaying world-ships known as the Legion is traveling in the seams between the stars.Here in the darkness, a war for control of the Legion has been waged for generations, with no clear resolution.

As worlds continue to die, a desperate plan is put into motion.

Zan wakes with no memory, prisoner of a people who say they are her family. She is told she is their salvation – the only person capable of boarding the Mokshi, a world-ship with the power to leave the Legion. But Zan’s new family is not the only one desperate to gain control of the prized ship. Zan finds that she must choose sides in a genocidal campaign that will take her from the edges of the Legion’s gravity well to the very belly of the world.

Zan will soon learn that she carries the seeds of the Legion’s destruction – and its possible salvation. But can she and the band of cast-off followers she has gathered survive the horrors of the Legion and its people long enough to deliver it?

In the tradition of The Fall of Hyperion and Dune, The Stars are Legion is an epic and thrilling tale about tragic love, revenge, and war as imagined by one of the genre’s most celebrated new writers.

Kameron Hurley is an award-winning author and advertising copywriter. Hurley grew up in Washington State, and has lived in Fairbanks, Alaska; Durban, South Africa; and Chicago. She has a degree in historical studies from the University of Alaska and a Master’s in History from the University of Kwa-Zulu Natal, specializing in the history of South African resistance movements.

Hurley is the author of the space opera The Stars are Legion, and a nonfiction collection, The Geek Feminist Revolution, which contains her essay on the history of women in conflict “We Have Always Fought;” the first article to ever win a Hugo Award. It was also nominated for Best Non-Fiction work by the British Fantasy Society. Her nonfiction has appeared in numerous online venues, including The Atlantic, and she writes a regular column for Locus Magazine.

Her epic fantasy series, the Worldbreaker Saga, is comprised of the novels The Mirror Empire(2014), Empire Ascendant (2015), and The Broken Heavens (Fall 2017).