Today I am interviewing Alex Bledsoe, author of the new fantasy novel, Gather Her Round, fifth book in the Tufa series.

DJ: Hey Alex! Thanks for agreeing to do this interview!

Alex Bledsoe: Thanks for having me, DJ. I’m a southern writer who now lives in Wisconsin, and the stay-at-home dad of three children. I’ve been writing my whole life, around stints as a reporter, editor, photographer and door-to-door vacuum cleaner salesman. I write primarily fantasy and horror.

DJ: What is Gather Her Round about?

Alex: It’s the fifth novel in my Tufa series, about an isolated Appalachian town whose citizens are all descended from Celtic faerie folk. In this one, a wild hog kills a young woman, and the pursuit of it brings out the best and worst in those who knew her.

DJ: What were some of your influences for Gather Her Round?

Alex: After four prior novels, I wanted to do something new, and I hadn’t yet done a monster story. I wanted the monster to be something reasonable, not supernatural or cryptozoological, so I considered a giant wild boar. Then I found out that Tennessee, where the novel is set, really does have an elite task force for dealing with the wild hog infestations, which gave me a sort of “Avengers, assemble” moment. Once I knew about that, the rest of the story was a snap.

Alex: Duncan Gowen is a young man who was dating the dead girl, and finds out that she was also seeing his best friend. He wants revenge, but even he’s not sure if it’s against the hog, or his friend.

Mandalay Harris is the hereditary leader of the Tufa, but she’s only fourteen, and still learning her role. She suspects the wild hog is the manifestation of a greater, supernatural evil, and goes to extraordinary lengths to find out.

Janet Harper is a Tufa teenager, a musical prodigy even in a town filled with them, and Mandalay drafts her to help discover the truth. Through it, she’s exposed to elements of her own Tufa nature that even she wasn’t aware of.

DJ: What is the world and setting of Gather Her Round like?

Alex: It’s set in the modern, contemporary world, in the fictional town of Needsville, TN, located in the equally fictional Cloud County. An ongoing theme of the series is that it’s no longer possible to hide as the Tufa have done for millennia, and so they have to figure out how to fit into the modern world.

DJ: Could you also tell a little about who the Tufa are?

Alex: The Tufa are an exiled band of Celtic faerie folk, banished to our world since before the first humans arrived in North America. They are divided into two groups, a split that mirrors the Seelie and Unseelie courts of faerie folklore. They keep and express their faerie magic in their music: almost all of them are exceptional players and singers.

DJ: Even though Gather Her Round is the fifth book in the series, I believe it can be read as a stand-alone?

Alex: That’s right, they’re all stand-alones. I want to make it easy for people to get into my books, not hard.

DJ: How is then, that all of these books are connected? Any characters or easter-eggs that readers of the previous stories may pick up on that new readers won’t?

Alex: This is a series based around a place, so a a main protagonist in one book might turn up on the periphery of the next story. There is a progression, particularly among the main knot of characters, that you can follow when you read them in order: they age, they marry, they have children, they die.

DJ: What was your favorite part about writing Gather Her Round?

Alex: That’s easy: the characters of Janet and Ginny, two teenage girls who like to play music, smoke dope and make observations. If I’d thought of them sooner, they’d have been in every book as a kind of stoner Greek chorus, or a gender-swapped Jay and Silent Bob. I might have to write a whole book about them sometime.

Alex: That’s always hard for the author to say, especially without a little distance from the book itself. I hope they see themselves in the characters, understand why they do both the good and bad things they do, and maybe come away with a little better understanding of, and compassion for, how we fuck up our lives without deliberate intent.

DJ: What was your goal when you began writing the Gather Her Round? Is there a particular message or meaning you are hoping to get across when readers finish it? Or is there perhaps a certain theme to the story?

Alex: Again, it’s tricky for the author to say what the “message” of something might be. I wrote this novel because I liked the characters, and I thought the story would draw out interesting aspects. I tried to give it a moral compass—nihilism is for my horror stories—but if there is a “theme,” it’ll be a while before I can see it. It may be totally obvious to readers, though, and that’s fair enough.

DJ: When I read, I love to collect quotes – whether it be because they’re funny, foodie, or have a personal meaning to me. Do you have any favorite quotes from Gather Her Round that you can share with us?

Alex: Ha. One of the fun aspects of these books is being able to work in little things I remember from growing up in Tennessee. In this case, it’s something my dad used to say when he wanted me to smell something bad: “Tell me this don’t stink.”

DJ: Now that Gather Her Round is released, what is next for you?

Alex: I’m finishing up the sixth Tufa novel, which will be out about this time in 2018.

DJ: Before we go, what is that one thing you’d like readers to know about Gather Her Round and the Tufa series that we haven’t talked about yet?

Alex: If you read a book you like, by any author, please leave at least a star rating for it at Amazon, Goodreads, or the review site of your choice. Those things really do matter.

Alex: My pleasure, DJ. Again, thanks for having me.

*** Gather Her Round is published by Tor Books and is available TODAY!!! *** 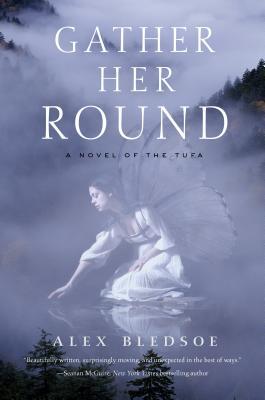 In critically-acclaimed Alex Bledsoe’s Tufa novel, Gather Her Round, a monster roams the woods of Cloud County, while another kind of evil lurks in the hearts of men.

Love and tragedy are not strange bedfellows among the Tufa. Young Kera Rogers disappears while hiking in the woods by Needsville. When her half-eaten remains are discovered, the blame falls upon a herd of wild hogs, a serious threat in this rural community. In response, the county’s best trackers, including game warden Jack Cates and ex-military Tufa Bronwyn Chess are assembled to hunt them down.

Kara’s boyfriend Duncan Gowen mourns her death, until he finds evidence she cheated on him with his best friend, Adam Procure. Seeking revenge, Duncan entices Adam to participate in their own boar hunt. Later, Bronwyn and Jack stumble across a devastated Duncan, who claims a giant boar impaled Adam and dragged him off. As this second death rocks the town, people begin to wonder who is really responsible.

Determined hunters pursue the ravenous horde through the Appalachians as other Tufa seek their own answers. Between literal beasts in the woods and figurative wolves in sheep’s clothing, what truths will arise come spring?

“Beautifully written, surprisingly moving, and unexpected in the best of ways.” ―Seanan McGuire, New York Times bestselling author on The Hum and the Shiver

I grew up in west Tennessee an hour north of Graceland (home of Elvis) and twenty minutes from Nutbush (birthplace of Tina Turner). I’ve been a reporter, editor, photographer and door-to-door vacuum cleaner salesman. I now live in a Wisconsin town famous for trolls, write before six in the morning and try to teach my three kids to act like they’ve been to town before. I’m the author of the Eddie LaCrosse high fantasy/hardboiled mysteries (“The Sword-Edged Blonde,” “Burn Me Deadly,” “Dark Jenny,” “Wake of the Bloody Angel” and “He Drank, and Saw the Spider”), two novels about vampires in 1975 Memphis (“Blood Groove” and “The Girls with Games of Blood”), the Tufa novels (“The Hum and the Shiver,” “Wisp of a Thing,” and the upcoming “Long Black Curl”) and the “Firefly Witch” short story ebook chapbooks.