Book Review: Into the Fire (Samantha Kane #1) by Patrick Hester 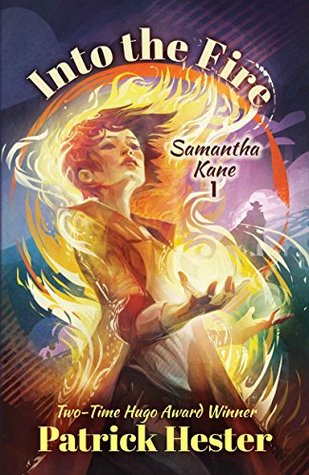 The Into the Fire (Samantha Kane #1) by Patrick Hester

Detective Samantha Kane just saw a ghost, a werewolf eviscerated her partner, and she burned down a building with magic. But not a bad day…all things considered.

Samantha Kane is struggling with this thing called ‘her life’, and how it can be completely turned upside down in the span of one week. Her partner and mentor is hospitalized, followed quickly by her father, who slips into a coma, her teenage brother decides now is the perfect time to rebel, and her mom lays the guilt on thick as molasses every chance she gets. Work isn’t much better. Recently promoted to detective, her job is suddenly in jeopardy, and the cops she’s worked with for years, no longer respect her or want her around. Not to mention the fact that Ghosts, Vampires, and Werewolves are real, and apparently want her dead.

According to a crazy man who showed up out of nowhere, Sam was never meant to be a cop. She’s supposed to be a Wizard.

Patrick Hester’s full length debut novel is full of the characteristic humor that you’ve grown to love on his multitude of podcasts and in his written word. An admitted fan of Butcher’s Dresden Files (shall we say Devoted Fan?), Detective Samantha Kane’s world is Hester’s own playground built in mimicry of Butcher’s. For fans of the genre he hits all the right points and has his own style and touches to make it authentic.

I went into the novel immediately enjoying Samantha Kane’s attitude and sarcastic wit, but it grew overbearing at times, distracting from the story; just as the story sometimes wandered. As Sam’s magic surfaces and the shield that kept her hidden from the things that go bump in the night starts to fail, it is made quite apparent that she must learn to control her powers and she must learn fast. Her life and that of all those that she loves hangs in the balance. So when even mentor, Jack Mayfair, seems to forget, finding more interest in tossing back a few bottles of whiskey, one has to wonder at the logic.

Not to mention that when a powerful vampire makes Sam’s acquaintance and attacks Mayfair standing right next to her, you’d think they would be a tad more cautious about sending her home and away from the powerful protections that encase the hodgepodge estate of Banba.

I would have liked more time spent developing some of the side characters, so that the double-cross had more impact. Ronan, the elf, was a fun addition to the crew—handy in a fight—but I have to wonder what he’s been doing for the last hundred years or so that he doesn’t know about burritos? Odd qualms like this offer distraction from an otherwise interesting story, a great reveal and sacrifice from Sam’s father, with the novel ending a whole lot stronger than it starts to meander off to.

Bottom Line: If you’re a Hester Fan, Into the Fire is another enjoyable piece of work and as the series grows and matures I anticipate good things to come. There are a number of unresolved questions that I look forward to uncovering that will (I think) further separate this from the Dresden Files that may have very well inspired Hester’s hand.

For the critical reader, looking for a rock-solid plot, delivery can, at times, be as disorienting as Mayfair’s teleportation ride through the disco-rainbow tunnel that he calls “alternate” transportation

A solid 3.5 stars, this series has promise for greatness.

(For those of you that have read the book: Can I just say *ouch* about his character nod to Butcher, and to that character’s end? As if a gauntlet was thrown to the ground, I must say. Too oblique? Read Into the Fire and see for yourself.)

One thought on “Book Review: Into the Fire (Samantha Kane #1) by Patrick Hester”