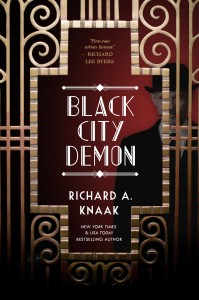 But wait…there’s more…in the book.

DJ: What were some of your influences for the Black City Saint series?

Richard: The old Shadow novels. The Maltese Falcon. The time period itself.

Richard: With Nick, it’s that he’s not the saint he’s expected to be. He’s bitter, he holds grudges, and he always has to fight the dragon within. He also doesn’t want to love Claryce — the reincarnation of the princess — but can’t help himself even if it means potential danger to both.

Claryce is used to being confident in her surroundings, but being thrust into Nick’s world and then discovering the truth about herself has made her reevaluate everything. Despite the violent deaths of all her previous selves, she will not give up on Nick.

Fetch was once a chief assassin in Her Lady’s court. Exiled for his failure to kill Nick, he’s now very grateful to the saint for all he’s done. Fetch has developed a fascination with mortal life, especially human slang. In some ways, he’s adapted to our world better than St. George!

DJ: What is the world and setting of Black City Saint series like?

Richard: As mentioned, Prohibition Chicago, end of 1925. Just a few weeks after the events of BLACK CITY SAINT, which will have repercussions in this novel. We’re at the height of the bootlegger wars, with Capone on one side and Bugs Moran and Hymie Weiss. Yet, unseen is the world of magic, including the hidden sanctum of H.H. Holmes, who has returned some thirty years after his execution.

DJ: Are we going to see more of the Feirfolk world this time around too?

Richard: Yes, you’ll get some more glimpses. You’ll also see how Feirie is beginning to spill into Chicago despite Nick’s efforts.

DJ: What I personally loved most about Black City Saint was all of the mystery surrounding Nick’s characters – particularly his background story!

You did give us many answer to Nick’s characters, but at the same created even more intrigues and wonder for me!

Is Nick’s history with the Feirfolk and where/when he actually comes from going to be explored more in this book?

Richard: Yes, somewhat, and I’ll be adding more questions. Still, by the end of the book, the groundwork will be laid for some very important aspects of both Nick’s and Claryce’s lives.

DJ: What was your favorite part about writing Black City Demon?

Richard: Intertwining the intentions of the various characters. We learn a lot more about most of them and again see that alliances and friendships can be fluid. Of course, Fetch and the dragon always fun to write, albeit for different reasons.

Richard: Besides Fetch? The increasing depth of the world and the main characters.   I think readers will want to explore more of this world I’ve created…well, created with the help of Chicago.

DJ: What was your goal when you began the Black City Saint series? Black City Demon is only the second book, but is there a particular message or meaning you are hoping to get across when readers finish it? Or is there perhaps a certain theme to the story?

Richard: If there is a particular theme, I think it would be what is a saint compared to what is a human? In some ways, Nick is struggling more with his humanity than Fetch and Kravayik, who come from Feirie. Nick is very human despite his supposed divinity and grates at the burdens on his shoulders…not that he’s about to give them up.

DJ: Now that Black City Demon is released, what is next for you?

Richard: I continue to add to the Dragonrealm. I’m slowly working on a trilogy advancing that world. Also working on THE CASTLE IN OBSIDIAN, the first novel of an entirely new trilogy. Then, of course, there’s the sequel to BLACK CITY DEMON and other projects too new to mention.

DJ: Before we go, what is that one thing you’d like readers to know about Black City Demon and the Black City Saint series that we haven’t talked about yet?

Richard: Things are only going to get more complex for Nick, especially in the third book. That will be obvious at the end of DEMON.

DJ: Actually, one more thing: I heard Black City Saint has just been optioned for a film!? Congrats!?

Richard: Yep! Through Ageless Pictures. I’ll post more about that as it progresses.

*** Black City Demon is published by Pyr and is available TODAY!!! ***

Please click on the Rafflecopter link below to enter to win one (1) physical copy of Black City Demon (Black City Saint #2)! Good luck!

*US and Canada residents only 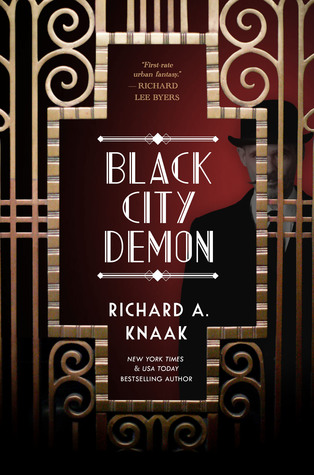 Since he became the guardian of the Gate between our world and Feirie sixteen hundred years ago, Nick Medea, once Saint George, has battled to keep the darkest Feirie–the Wyld–from invading the mortal plane. With the dragon an unwilling part of him, Nick maintains balance between realms, often at great cost to him and those nearest to him.

Nick and his ragtag confederates–including the shape-shifter Fetch and Nick’s reincarnated love, Claryce–have battled the Wyld, but mortals as sinister as the darkest Feirie. Now, with Prohibition in full swing and bootlegger wars embattling Chicago, a murderous evil born of the mortal world has turned its attention to the power of the Gate…and Nick himself.

Nick must turn again to his most untrustworthy ally: the dragon within. Yet even together they may not be enough to face what was once a man…but is now a creature even dragons may fear.

Richard A. Knaak was born in Chicago on May 28, but now splits his time between Chicago and Arkansas. Originally a chemistry major at the University of Illinois in Champaign-Urbana, he switched to Rhetoric, graduating with a Bachelor’s Degree. He has been published since 1987 and his works have been translated into German, Italian, French, Danish, Japanese, Spanish, Polish, Finnish, Czech, Hungarian, Turkish, and Russian.

On the side, he enjoys reading, travel, food, and old movies.