Today I am interviewing Marshall Ryan Maresca, debut author of the new fantasy novel, The Holver Alley Crew, first book in The Streets of Maradine series.

DJ: Hey Marshall! Thanks for agreeing to do this interview!

DJ: What is The Holver Alley Crew about? 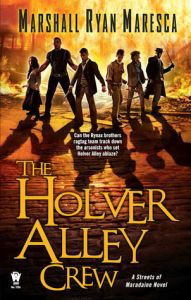 Marshall: The Holver Alley Crew is about two brothers, Asti & Verci Rynax, who used to be thieves but are trying to live a straight-and-narrow life, until a fire destroys everything in Holver Alley and ruins their lives and livelihood. With no other options and a mounting debt, they fall back on the old ways.

DJ: What were some of your influences for The Holver Alley Crew?

Marshall: I’ve been saying that, in a lot of ways, it’s OCEANS 11 meets THE COMMITMENTS. The latter is really a thing that was on my mind as I wrote it, as it’s about a group of people in the impoverished part of Dublin who team up to find hope and joy and a possibility of a future. Of course, they do it with soul music, rather than pulling a heist, but the principle is the same.

Marshall: For any heist, you need a crew:

The Planner: Asti Rynax, former intelligence officer, forcibly retired. The one who can figure out all the angles and put together a plan so crazy that no one will see coming. Deadlier with an apple and a lockpick than most people are with a pair of knives.

The Sharpshooter: Helene Kesser, best crossbow shot in all West Maradaine, with a mouth as sharp as her aim.

The Muscle: Julien Kesser, Helene’s cousin. Strong as an ox, but not allowed to fight, or you’ll answer to Helene. Loves cheese.

The Driver: Kennith Rill, carriage driver. Designed an unrobbable carriage, which they now have to rob.

The Apprentice: Mila Kentish. Teenage beggar girl that no one notices until after their purse is already gone.

The Old Boss: Josie Holt, the boss of North Seleth, who’s willing to give the Rynax boys one last chance for old time’s sake.

DJ: What is the world [What is the name of the universe] or setting of The Streets of Maradine series like? (the environment, weather, people, religion, technology, architecture, government, etc; is it violent, peaceful, patriarch/matriarch, etc.)

Marshall: Maradaine is a sprawling port city, the capitol of the nation of Druthal. It’s a society that’s on the verge of a lot of things. In terms of technology, it’s in the process of going from a “gearpunk” society to a “steampunk” one. While it’s sort-of a democracy (a Parliamentary monarchy, to be specific), there’s still a lot of inequality and social injustice. The Streets of Maradaine explicitly takes place in one of the poorer neighborhoods on the west side of the city.

DJ: What was your favorite part about writing The Holver Alley Crew?

Marshall: Writing the Rynax brothers, and having them come up with their plans and schemes. It is so much fun writing in their voice.

Marshall: Tough call. I never try and guess what readers will grab onto—invariably I’ve been wrong about it. I think they’ll be talking about the characters and their fun interaction, but I could be wrong.

DJ: What was your goal when you began writing The Streets of Maradine series? The Holver Alley Crew is only the first book, but is there a particular message or meaning you are hoping to get across when readers finish it? Or is there perhaps a certain theme to the story?

Marshall: The main thing I’m trying to do—not just with Streets but with all the different Maradaine series—is trying to show a rich, multi-faceted fantasy world from all these different angles.   I wanted to interrogate certain notions of what fantasy could be. But specifically in Holver Alley, there’s a theme of family and community, and who you choose to be a part of yours. And punching the bad guys.

DJ: When I read, I love to collect quotes – whether it be because they’re funny, foodie, or have a personal meaning to me. Do you have any favorite quotes from The Holver Alley Crew that you can share with us?

Marshall: This is a bit where Asti and Verci remind each other of their own “never give up, never surrender” credo:

“Look at me!” Verci grabbed his brother’s head, forcing him to meet his eyes. He’d be damned if he let Asti slip off on him now. Not in the middle of this. “Job ain’t over, and we’re skunked. You hear me?”

“Job ain’t skunked until your pinched or dead,” Asti whispered. One of dad’s rules.

“Are we pinched?” Verci asked.

“Not yet.” A hint of a smile crossed Asti’s lips.

“Then we drive forward, hmm?”

DJ: Now that The Holver Alley Crew is released, what is next for you?

Marshall: The next one is The Imposters of Aventil, which is the third “Thorn” novel, but is also the book that takes the larger Maradaine saga to the next level, as the Constabulary characters are a key part of that book. In addition to the next Streets and Constabulary novels (Lady Henterman’s Wardrobe and A Parliament of Bodies, respectively), I’m working on a fourth Maradaine-set series that’s tentatively called The Maradaine Elite. It focuses on partly on the government and nobility, but also on an old, traditional warrior order that is growing obsolete in the advancing society. If all goes to plan, we should be seeing that series launch in 2019 with the first book, The Way of the Shield.

DJ: Before we go, what is that one thing you’d like readers to know about The Holver Alley Crew that we haven’t talked about yet?

Marshall: There’s a quote—not from me or the text—that just recently came about that, I think hits the exactly on the thematic notions of the book. It comes from David Harbour accepting the SAG Award on behalf of the cast of Stranger Things, and it fits in, I think, exactly as a mission statement that Asti Rynax would make:

“We will shelter freaks and outcasts, those who have no home; we will get past the lies; we will hunt monsters; and when we are lost amidst the hypocrisy and casual violence of certain individuals and institutions, we will punch some people in the face when they seek to destroy the meek, the disenfranchised and the marginalized, and we will do it all with soul, with heart and with joy.”

*** The Holver Alley Crew is published by Daw Books and is available TODAY!!! *** 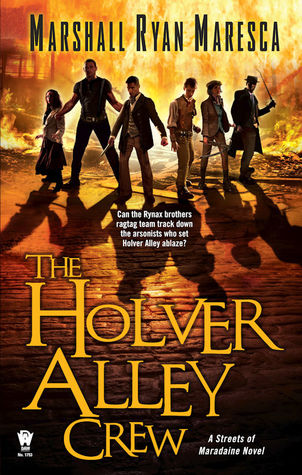 The Rynax brothers had gone legit after Asti Rynax’s service in Druth Intelligence had shattered his nerves, and marriage and fatherhood convinced Verci Rynax to leave his life of thievery. They settled back in their old neighborhood in West Maradaine and bought themselves a shop, eager for a simple, honest life.

Then the Holver Alley Fire incinerated their plans. With no home, no shop, and no honest income–and saddled with a looming debt–they fall back on their old skills and old friends.

With a crew of other fire victims, Asti and Verci plan a simple carriage heist, but the job spirals out of control as they learn that the fire was no accident. Lives in Holver Alley were destroyed out of a sadistic scheme to buy the land.  Smoldering for revenge, burdened with Asti’s crumbling sanity, the brothers and their crew of amateurs and washouts swear to take down those responsible for the fire, no matter the cost.

Marshall Ryan Maresca grew up in upstate New York and studied film and video production at Penn State. He now lives Austin with his wife and son. His work appeared in Norton Anthology of Hint Fiction and Rick Klaw’s anthology Rayguns Over Texas. He also has had several short plays produced and has worked as a stage actor, a theatrical director and an amateur chef. His novels The Thorn of Dentonhill and A Murder of Mages each begin their own fantasy series, both set in the port city of Maradaine.
For more information, visit Marshall’s website at www.mrmaresca.com.