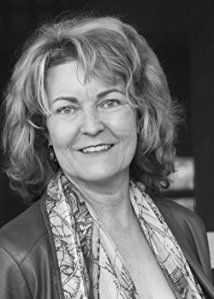 DJ: Hey Cat! Thanks for agreeing to do this interview!

Cat Sparks: Sure thing, DJ, I’ve been a rabid science fiction fan since I was a kid, growing up on a steady diet of Doctor Who, Thunderbirds, Star Wars and everything else in between – and I do mean everything… I wrote so much sci fi when I was a teen that an English teacher actually banned me from writing it in her class. You can see for yourself how well that plan turned out…

I have a BA in Visual Arts and have had some interesting (and not so interesting) jobs across the years: media monitor, political and archaeological photographer, graphic designer, Fiction Editor of Australia’s Cosmos Magazine and Manager of Agog! Press. In 2012 I was privileged to score and Australia Council grant, which sent me to Key West, Florida to participate in Margaret Atwood’s brilliant The Time Machine Doorway workshop.

I am currently finishing up a PhD examining science fiction and climate fiction and its potential responsibility to the future. My first short story was published in 2000. Lotus Blue took 10 years to complete, a process in which over 300,000 words ended up in the bin. I’m not sure if that checks the box for stubbornness or crackpot perseverance.

DJ: What Lotus Blue about? 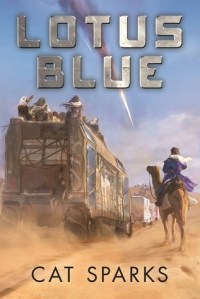 Cat: Lotus Blue is the story of Star, a girl who can’t remember her past. The tough life she shares with her elder sister as part of a thirteen-wagon caravan of nomadic Sand Road traders changes forever when the Van witnesses a relic-Angel satellite plummeting to Earth, kick starting a chain of events that send Star on a perilous journey that makes Van life seem comfortable by comparison.

Slowly she’s forced to come to terms with the horror of her unfolding destiny—as the terrible secret her sister had been desperate to protect her from begins to unravel.

Meanwhile, something old and powerful has woken in the desert. A Lotus Blue, deadliest of all the ancient war machines. A warrior with plans of its own, far more significant than a fallen Angel. Plans that do not include the survival of humanity.

DJ: What were some of your influences for Lotus Blue?

Cat: I was very much inspired by Frank Herbert’s classic Dune, which I read when I was a teen. There is something epically attractive about deserts and the tough types who inhabit them. Also, Australian author Terry Dowling’s Tom Rynosseros stories which, I believe, will be back in print via PS Publishing before the end of the year.

I’ve always been attracted to post-apocalyptic landscapes and narratives, the brutal romance of surviving the end of the world. I should also mention a few well respected non-desert end-of-the-world stories: John Christopher’s Tripods series, George R Stewart’s Earth Abides, John Wyndham’s The Day of the Triffids & The Chrysalids, Leigh Brackett’s The Long Tomorrow, Neville Shute’s On The Beach, Octavia Butler’s The Parable of the Sower & The Parable of the Talents, David Brin’s The Postman…

Cat: Protagonist Star, only seventeen, with no memories from the first years of her life, placing all her trust in her decade-older sister Nene, but reaching the point where she plans to break out and follow her own path. Instead, the responsibility for the survival of humanity itself gets thrust upon her.

Tully Grieve: street kid, grifter, thief and habitual liar, always looking out for number one, always, always, except for maybe this time…

I have a particular fondness for Quarrel, the battered Templar supersoldier. He used to be a contender, back before the world got broken beyond repair, and now he’s been dragged out of mothballs and forced back out onto the sand on a deadly assignment. Fragmented memories tumble relentlessly through his damaged, addiction-ravaged brain, but he’s still in there somewhere, fighting to get free.

DJ: What is the world and setting of Lotus Blue like?

Cat: I don’t actually state it anywhere in the novel, but Lotus Blue is set in a far future Australia. Australians will pick up odd references here and there — it’s a landscape that was ruined by severe climate change, bad choices made by weak governments, in particular the decision to sell off vast tracts of uninhabitable interior land to foreign governments and corporations, allowing them to do whatever they wanted with it. Weapons testing, experimental prototypes, dangerous synthetic biology, dumping of toxic waste. After civilisation disintegrated and the rich bunkered underground, semi-sentient weaponry was left up top tearing up the dust and contaminated sand. Rogue Tankers are hunted for their nano-oil and “heart-and-brains” in the fashion of 17th century whaling… except on land, not sea.

There are no countries any more in the future world of Lotus Blue, just towns and tribes and affiliations. Technology might have fallen by the wayside, but commerce thrives, particularly the relic scavenging business, where old tech is salvaged under dangerous conditions and sold to the Fortress cities, underground enclaves with the knowledge of how to make partial use of it.

The desert, known as the Dead Red Heart, is literally crawling with monsters leftover from various ancient wars. It’s across that Desert that Star must go to fight for the future by confronting the demons of her past.

DJ: What was your favorite part about writing Lotus Blue?

Cat: Developing the centuries-old super soldier characters Quarrel and Marianthe. They’re both so complex by default, having lived through the fall of civilisation — seen the worst and survived, albeit plagued by fragmented and often horrific memories, damaged well beyond repair. Quarrel ended up an object of religious reverence in an underground bunker temple, whereas Marianthe struck out aboveground to form a quasi-religion of her own in the ruins of a radio telescope dish. She’s spent decades honoring the fallen, taking in bedraggled refugees, teaching them how to farm and forage, even though she thinks the world is dead and there’s barely any point to living anymore.

And then there’s the General – the Lotus Blue, an AI who believes himself to be an uploaded human consciousness, who wants access to a long dead world he knows only through false memories, a war machine with the power to blast everything to dust if things don’t work out the way he wants.

Cat: With any luck they’ll be asking me for a sequel!

DJ: What was your goal when you began writing Lotus Blue? Is there a particular message or meaning you are hoping to get across when readers finish it? Or is there perhaps a certain theme to the story?

Cat: My goal was to produce a worthy addition to the genre I love with all my heart. The themes at the heart of this story are that diversity is not a curse, it can be weaponised,; that good people are worth fighting for, no matter how bleak things seem. That what we think of as our ‘humanity’ comes not from our biology – our meat and bones, but from spirit. Like most post-apocalypse narratives, Lotus Blue can definitely be read as a cautionary tale, warning us to take better care of our planet before its too late.

DJ: Now that Lotus Blue is released, what is next for you?

Cat: I’m running very behind on my PhD, mostly because of this novel and how it managed to spill across more months than anticipated. Everything always takes me longer than I think it will. But the PhD must be finished this year so I can get on with writing another novel. I have an idea for a sci fi thriller set in the present day, but I’d also be keen to write a sequel to Lotus Blue if the book sells well enough.

DJ: Before we go, what is that one thing you’d like readers to know about Lotus Blue that we haven’t talked about yet?

Cat: That it was a labor of love and writing it nearly killed me!

Cat: Thanks very much for inviting me, DJ! 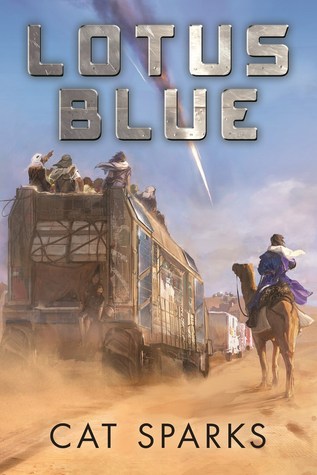 Powerful war machines of the far-future collide across a barren desert world in this post-apocalyptic debut novel from award-winning Australian author Cat Sparks.

Seventeen-year-old Star and her sister Nene are orphans, part of a thirteen-wagon caravan of nomadic traders living hard lives travelling the Sand Road. Their route cuts through a particularly dangerous and unforgiving section of the Dead Red Heart, a war-ravaged desert landscape plagued by rogue semi-sentient machinery and other monsters from a bygone age.

But when the caravan witnesses a relic-Angel satellite unexpectedly crash to Earth, a chain of events begins that sends Star on a journey far away from the life she once knew. Shanghaied upon the sandship Dogwatch, she is forced to cross the Obsidian Sea by Quarrel, an ancient Templar supersoldier. Eventually shipwrecked, Star will have no choice but to place her trust in both thieves and priestesses while coming to terms with the grim reality of her past—and the horror of her unfolding destiny—as the terrible secret her sister had been desperate to protect her from begins to unravel.

Meanwhile, something old and powerful has woken in the desert. A Lotus Blue, deadliest of all the ancient war machines. A warrior with plans of its own, far more significant than a fallen Angel. Plans that do not include the survival of humanity.

Skyhorse Publishing, under our Night Shade and Talos imprints, is proud to publish a broad range of titles for readers interested in science fiction (space opera, time travel, hard SF, alien invasion, near-future dystopia), fantasy (grimdark, sword and sorcery, contemporary urban fantasy, steampunk, alternative history), and horror (zombies, vampires, and the occult and supernatural), and much more. While not every title we publish becomes a New York Times bestseller, a national bestseller, or a Hugo or Nebula award-winner, we are committed to publishing quality books from a diverse group of authors.

Cat Sparks is a multi-award-winning Australian author, editor and artist whose former employment has included: media monitor, political and archaeological photographer, graphic designer, Fiction Editor of Cosmos Magazine and Manager of Agog! Press. A 2012 Australia Council grant sent her to Florida to participate in Margaret Atwood’s The Time Machine Doorway workshop. She’s currently finishing a PhD in climate change fiction. Her short story collection The Bride Price was published in 2013. Her debut novel, Lotus Blue, was published by Talos Press, an imprint of Skyhorse, in March 2017.