DJ: Hey Neal! Thanks for agreeing to do this interview!

Neal Asher: My pleasure DJ. About myself? I’m a 56-year-old SF writer who came up the hard way. I wrote while working in all sorts of jobs – engineering, building, all sorts, I even delivered coal once – didn’t get published for a while, then got the odd short story published, then a novella, a collection, another novella (all for buggerall money) until finally I was taken on by Macmillan in 1999. Since then my total of published books is about 23. I divide my time between Essex in the UK and the island of Crete. I’m a practical man and not one of those effete writers who delights in being unable to work with his hands. Having recently gone through a bit of a hiatus (I lost my wife) I’m back at the keyboard. I’m hoping to at least get above 50 books before they nail me in a coffin.

DJ: What is Infinity Engine and then the Transformation trilogy about?

Neal: Transformation … but I guess you want me to elaborate. The story concerns a blacklisted artificial intelligence called Penny Royal who went rogue after exterminating 8,000 human troops on its own side. It concerns this AI’s apparent search for redemption, the revenge motives of a resurrected human soldier who is pursuing it, and the search for explanations by those who were transformed by it.

DJ: What were some of your influences for the Transformation trilogy?

Neal: My previous books, the thousands of SF books I’ve read, the films I’ve seen, the science I read…

Neal: Thorvald Spear is one of the 8,000 soldiers Penny Royal killed. He has been resurrected from a recording of his mind that turned up 100 years after the prador-human war during which this atrocity was committed. His immediate motive is revenge, but while he pursues Penny Royal he learns that the AI may have tampered with his mind – that he is acting in accordance with its wishes. Riss is an assassin drone – a killing machine made in the shape of a prador parasite whose sum purpose was to inject real parasite eggs inside prador to spread death and terror. Disenfranchised by the end of the war she searches for purpose and is … damaged by Penny Royal. She joins Spear in his quest. Sverl is a prador – one of the hostile crab-like aliens who went to war against the human Polity – having fled into exile after a new king of the prador made a truce with the humans, he does not understand how weak humans and detestable AIs nearly destroyed the prador kingdom. He again was once seeking answers and encountered Penny Royal. The answer the AI gave was his grotesque transformation into a tri-part being of prador, human and AI. He still wants answers…

DJ: What is the world and setting of the Transformation trilogy like?

Neal: The Human Polity is a civilization extending across many star systems. It is run by benevolent (and sometimes malevolent) AIs. At its core it is essentially a utopia: all ills have been cured, life is potentially eternal, there is no lack of resources, space ships travel between worlds FTL through U-space while from world to world there are instantaneous transmission gates called runcibles. However, at the Polity border and beyond, things are not so utopian. The Polity ran up against the prador – a kingdom of hostile aliens. A massive and highly destructive war ensued. The Polity was winning when the old king of the prador was usurped and a new king sued for peace. The two realms now sit in uneasy truce with a ‘no-man’s land’ between called the Graveyard.

DJ: How have the reviews been from readers, bloggers, and reviewers for the first two books of the Transformation trilogy? Is there anything that your audience seems to be particularly enjoying or is eager to find out more about?

Neal: Reviews have been good and readers seem to be enjoying the usual from me in the way of high technology, hostile aliens, weird environments, superior AIs and irascible war drones. As ever they want more about the major characters – usually the non-human ones like Penny Royal.

DJ: What was your favorite part about writing Infinity Engine and completing the final book in the Transformation trilogy?

Neal: I approached my writing of this series in a different way. Previously, as with my Spatterjay trilogy and the five book Cormac series, I wrote the next book after the previous book was published, so completion was a bitch. With this I wrote all three books to first draft before I even had to submit the first. What I enjoyed, therefore, was being able to go back to book one and make alterations while I was writing, say, book three. But in the end the most enjoyable thing was completing that last book, and knowing I’d got it right.

DJ: What do you think readers will be talking about most once they finish Infinity Engine?

DJ: Did you have a goal when you began writing the Transformation trilogy? Was there a particular message or meaning you are hoping to get across when readers finish it? Or is there perhaps a certain theme to the story?

Neal: All my books are about transformation and, I guess, all books are! In this trilogy I took it to extremes. What does it mean and what can it mean when it is possible to change someone, and I mean totally change them, both physically and mentally? It was also an exploration of the exigencies of war and the subsequence prices that must be paid. But all of it wrapped up in what I hope is a wild ride

Neal: I don’t first imagine plots. I just write. I’m not one of these writers who plans everything out and has a board covered with post-it notes hanging over my desk like the Sword of Damocles. In fact I want to know what happens next as much as, I hope, the reader does. However the books do evolve. I am often going back to alter what I’ve written before to fit what I’m writing now. Sometimes I excise whole plot threads and sometimes I take out characters (often blending them with another to serve a purpose).

DJ: When I read, I love to collect quotes – whether it be because they’re funny, foodie, or have a personal meaning to me. Do you have any favorite quotes from Infinity Engine that you can share with us?

Neal: I do believe one has already been taken from Dark Intelligence and used at the start of some major computer game: ‘To appreciate the wonder of the universe, one must first remain alive.

DJ: Now that Infinity Engine is released, what is next for you?

Neal: I’m currently writing a new trilogy titled The Rise of the Jain. This concerns an ancient (apparently) extinct alien race and the civilization-destroying technology they left scattered all over the galaxy. I’ve written the first draft of the first book and it is called The Soldier – that would be a Jain super-soldier. There’s a dragon in it, but he’s a 50-mile-wide spherical alien entity with some dodgy motivations. There’s a lethal wormship and the last of a race the prador exterminated running around in a giant Polity weapons platform. Things could get messy.

DJ: Before we go, what is that one thing you’d like readers to know about Infinity Engine and the Transformation trilogy that we haven’t talked about yet?

Neal: It’s fun, but with plenty for your brain to chew on.

Neal: Not really. Thanks for stopping by!

DJ: And thank you so much for taking time out of your day to answer my questions!

*** Infinity Engine is published by Night Shade Books and is available TODAY!!! *** 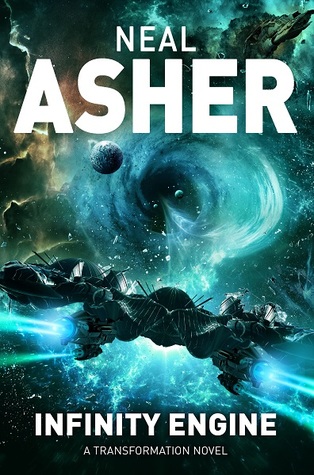 In the outskirts of space, and the far corners of the Polity, complex dealings are in play.

Several forces continue to pursue the deadly and enigmatic Penny Royal, none more dangerous than the Brockle, a psychopathic forensics AI and criminal who has escaped the Polity’s confinements and is upgrading itself in anticipation of a deadly showdown, becoming ever more powerful and intelligent.

Aboard Factory Station Room 101, the behemoth war factory that birthed Penny Royal, groups of humans, alien prador, and AI war drones grapple for control. The stability of the ship is complicated by the arrival of a gabbleduck known as the Weaver, the last living member of the ancient and powerful Atheter alien race.

What would an Atheter want with the complicated dealings of Penny Royal? Are the Polity and prador forces playing right into the dark AI’s hand, or is it the other way around? Set pieces align in the final book of Neal Asher’s action-packed Transformation trilogy, pointing to a showdown on the cusp of the Layden’s Sink black hole, inside of which lies a powerful secret, one that could destroy the entire Polity.

Neal Asher lives sometimes in England, sometimes in Crete and mostly at a keyboard. Having over eighteen books published he has been accused of overproduction (despite spending far too much time ranting on his blog, cycling off fat, and drinking too much wine) but doesn’t intend to slow down just yet.