Today I am interviewing J.J. Patrick, author of what he calls “a bit of a unique novel”, Forever Completely.  It’s proving hard to categories, even for the author, but “witches, zombies, the end of the world, and a nice, old dear in a tracksuit” seems to be the consensus…

DJ: Hey J.J.! Thanks for agreeing to do this interview!

J.J. Patrick: My story’s pretty standard really…I was a police officer for ten years, eventually working at Scotland Yard as a specialist analyst where I uncovered the national manipulation of crime statistics and sparked a parliamentary inquiry which saw me hounded out of my job as a whistleblower hated by my bosses but praised in Parliament. After that things went wonky and I ended up bankrupt and malnourished, living in poverty, in a sink estate bedsit with a Scottish alcoholic urinating on the floor in the room above every night. You know, the usual mundane stuff…

DJ: What is Forever Completely about?

J.J.: It’s about falling apart. About being lost. Being found. It’s about love at its heart. The world around us is a strange place right now, people making odd decisions and a surreal layer of protectionism overseeing all of it in the most dangerous way, and FC captures the risks by destroying the world through selfish acts of war and extremism, and leaving something else to grow in it’s place. Magic. Of course, conflict Never quite finishes, because people are people, so after the desolate loneliness of the apocalypse come a whole other round of loss before positive choices set the world right for good. The book is about finding yourself, and having deities with a rather naughty sense of humour.

DJ: What were some of your influences for Forever Completely?

J.J.: I’m a lifelong reader of Stephen King, and so many of his journeys resonate with me, but FC was mainly influenced by a need for me to escape at the time I was writing it. There’s a lot of me in there, and a lot of my beliefs too. The world is a magical place if you’re prepared to look for it. I suppose the biggest influence on the story is people themselves – I’ve seen the best and worst of them, and the love/hate conflict of daily life was a huge driver. The human condition is the best material any writer has.

J.J.: The main character is the narrator and apparently he’s quite likeable, in a frustrating way. He’s utterly broken and that seems to capture something in people. Gives them something to identify with. The centrepiece though is Jeanette, the old hedge witch with the awful, eye-popping wardrobe. She’s forthright, sassy, grumpy and utterly, utterly wonderful. People love her and so do I. So much so, she’s having her own book. The characters all introduced themselves as they are, and I genuinely think there’s someone in there for everyone.

DJ: What is the world and setting of Forever Completely like?

J.J.: FC is here and now. It’s this dangerous, geopolitical tinderbox of ours today – and exactly what would be left of it afterwards. The bulk of the book is set in Cornwall, and the rules of physics definitely apply – which is why so many people get badly injured by abusing magick to bend what’s possible. The world of the deities is essentially the woods, nature. The Summerlands. There’s nothing people won’t recognise immediately, and the suspension of belief the magic elements of the story require are much stronger for the real world grounding.

DJ: What was your favorite part about writing Forever Completely?

J.J.: Jeanette. Always her. Sitting on a saggy sofa – I had no chair to put in front of the desk – into the late evening while my life went south and my stomach cramped, she brought me joy in all the pain.

J.J.: I’ve only ever had one goal for FC, and that’s for people to finish it and say “I’ve no idea what just happened, but I kind of liked it”. So far that’s exactly what people do, which is a win as far as I’m concerned.

DJ: What was your goal when you began writing Forever Completely? Is there a particular message or meaning you are hoping to get across when readers finish it? Or is there perhaps a certain theme to the story?

J.J.: Like I say, the goal was to leave people scratching their heads in a good way. I don’t have any lofty ideals with FC, but it’s about taking responsibility for our actions in the world and owning the consequences – even the unintended ones. There are a few morals in there, I guess, and a pretty surgical dissection of the human condition as a whole, but there’s mainly love. Love in all of its painful glory.

DJ: When I read, I love to collect quotes – whether it be because they’re funny, foodie, or have a personal meaning to me. Do you have any favorite quotes from Forever Completelythat you can share with us?

J.J.: I’ve pulled out two quotes in photos which I like, but there’s so much to go at – and I’m holding back The Void as it’s something you have to read to understand. Or not understand. My favourite line is the start of one of the chapters though…”The dawn sky was sordid. A real whore of a sunrise, with last night’s garish make-up smeared across its face.” They say a picture paints a thousand words but, sometimes, twenty words can knock it out of the park.

DJ: Now that Forever Completely is released, what is next for you?

J.J.:  FC has been out in hardback since September, so the beach read paperback comes out on April’s full moon (the 11th) and the ebook price will come down at the same time. In the meantime I’ve been busy…my police autobiography The Rest Is Silence is out, I’m writing Jeanette’s story, a Mexico memoir, and a horror, while juggling some crowdfunded journalism which is taking time to Sweden…basically I’m fighting Nazis, but everything has consequences. Everything.

Google me…it’s novel. But you can also look at:

*** Forever Completely is published by Cynefin Road and is available TODAY!!! *** 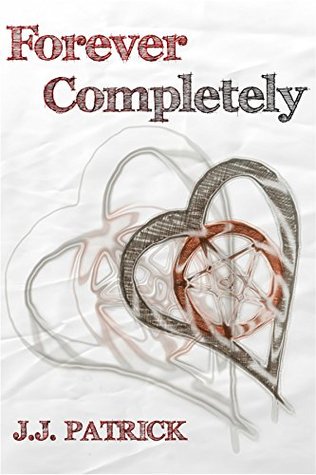 Forever Completely is an unapologetically unique debut by J.J. Patrick, set in a haphazard world of love, psychopathic primates, hodgepodge witchcraft and the apocalyptic end of mankind.

He doesn’t matter. That’s how he feels, writing a bitter note on a Saturday morning. He’s lost his relationship, gone bankrupt and lives in a drug infested sink estate…until he’s shown a vision of the end of the world by two ancient deities.

Join a lovelorn mess of a man as he is forced to face up to what he deserves and save the Earth, with the help of a nice old dear and her collection of eye-popping tracksuits…

“A brilliantly haphazard, broken glory all of its own. Forever Completely is utterly unashamed of itself…” – Quiet Radicals

James once did a good thing. He now lives a quiet life and is happy with his lot, which is all that really matters. He’s been compelled to write ever since he can remember.

J.J. Patrick — or JP to those who know that he’s nothing but trouble — was born in the New Forest and did most of his growing up in Derbyshire.

He served as a police officer for ten years, resigning from New Scotland Yard having acted as a whistle-blower, kicking off a parliamentary inquiry into the manipulation of crime figures by the police. He received open praise at the highest levels, for his integrity.

At a bit of a loose end — largely being seen as an unemployable risk to skeletons in closets everywhere — he opened a pub. Wrestling a road closure, along with his own demons and ghosts, he was bankrupted and lost everything in the spring of 2016.

If you knew him, you’d say that the broken pieces fit together much better nowadays.

Should you wish to keep up with his often ludicrous and frenetic antics, you can find him on Twitter as @j_amesp