Excerpt: The Perihelion by D.M. Wozniak

D.M. Wozniak is not nearly as interesting as the worlds and characters he creates, except, perhaps, for the fact that he has six children – three of whom are triplets. He lives in the close suburbs of Chicago with his wife Michele, five daughters, one son, and a massive labrador. He’s not sure if his home would be part of Bluecore 1C or in the Redlands.

For decades he has been reading speculative fiction novels by the likes of Gene Wolfe, Dan Simmons, Neil Stephenson, and Patrick Rothfuss, and somehow found the time to write one of his own. And then one became two.

A software architect by trade, his interests also lie in photography, independent music, and wasting money on his Porsche 911. Oh wait… forget that. He had to sell it.

If you enjoyed The Perihelion, check out The Gardener of Nahi. It’s just as confusing.

I have seen more human tragedy than all of my oaks, creeks, and beaches combined.

Since you are a mortal, you may naturally think I am referring to occurrences that have happened in your brief lifetime — I believe your word for it is modern. You lack perspective, however, which is why you constantly repeat the same mistakes over and over again, as if they are your seasons. No. This madness started even before I was a Bluecore.

It started even before I had a name.

During the War of 1812, the Battle of Fort Dearborn was on my soil, in a grove of cottonwood saplings. At the time I was considered wilderness — one of the invading white commanders said my lands were “so remote from the civilized parts of the world.” Little did he know he would die at the hands of the natives that hunted my prairies for years, his heart being cut out and eaten, to absorb his courage.

You see? Things like that never happened ten-thousand years ago, when ice began carving me from the earth, like one of your prodigious sculptors.

Oh, but you might say in reply, “the wolf eats the heart of the white-tailed deer.” And you would be right. Thousands of years ago before you humans came into my lands, they did exactly that. But they ate the hearts to survive.

You mortals are special, in the sense that you have reason. You eat like animals, you copulate like animals; yet soon thereafter the similarity ends. And the dreaming begins.

About the same time that ill-fated commander’s heart was eaten, the natives started calling me “shikaakwa,” which means “smelly onion” in their tongue. I always liked that name, since it honored the illustrious leeks which thrived in my watersheds. It commemorated something that I have always freely given away.

Years later, when traders came from France, they took this name and changed it into their own tongue, because you mortals can’t simply take something and let it be. You need to change it and mold it. You are masters of the malleable. You need to make it yours.

And so the city of Chicago was born.

There was a great fire in 1871, where hundreds of you humans perished, and much of me was burnt to the ground. This, in and of itself, caused me no pain, except perhaps the folly which I saw unfolding, knowing there was nothing I could do to stop it. You built all of your buildings out of wood from my trees! What did you think would happen? Little did you know that before you settled my lands, prairie fires occurred as often as I required them. These were necessary to keep the overzealous in order — to give a chance at new life. Fire is the level-setter. It is the prime regenerator.

That’s one thing I will give you credit for. You rebuilt after the destruction, as I hoped you would. You traded wood for stone. You swapped your mediocre stupor with grand dreams. And for the first time, I was proud that you called me home.

For nearly two-hundred years, you prospered.

But then, something odd happened: you let your dreams get the better of you.

Somehow, you lost your way. Like the tall spires that you build, which scratch the heavens, you started believing that you were something else. In your selfish arrogance you started to create laws which did not abide in the nature of common sense. It would be as if I said to a cottonwood tree that she could walk, or if I told the white-tailed deer that he could slay the wolf.

I could say all of these things to make them happy, but I’d be lying.

The culmination of this pride came in the year 2069. By then you stopped referring to me as the city of Chicago. Instead, you took a hatchet to history and glued a number and letter together as my name: Bluecore 1C. You began fighting amongst yourselves, convinced that the other side was wrong. There were riots. You built walls to keep yourselves apart from one another.

You humans! Is the sea wrong? Is the prairie wrong? Or can they both exist in peace with one another? There is a time and place for everything, but when you change the center to yourself, nothing will be in balance.

And so now we are caught up to your own dizzying time. Why you mortals ever called it an attack I shall never understand. Who was attacking whom? Let me distill this to its essence: the technology which was taken from you simply did not exist even a hundred-thirty years prior. Do you even comprehend how short of a timespan that is? It is an afternoon in the sun for me.

Speaking of the sun, I wonder if you see the irony. Out of all days to lose your own self-directed sense of power, the all-giving source was right there. It was the perihelion, of all days, when this so-called attack occurred. Except you could not even see it, because you were all turned away from the truth. You had changed the center.

No. That’s not quite right. If I recall, there were six mortals among you that learned the truth before the end. In that darkness, they found something invaluable. In that silence, they heard a voice.

Perhaps it is true what you mortals say: In all tragedy, something good always comes from it. 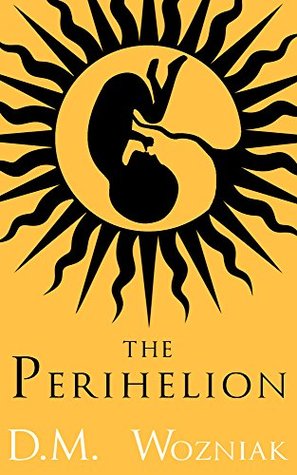 peri•he•lion : the point in the path of a celestial body that is nearest to the sun
– Merriam-Webster Dictionary

It is Thursday, January 3, 2069: the eve of the perihelion. Night is upon Bluecore 1C (what used to be known as the city of Chicago before the riots). Snow is falling, plans are being made, and within hours everyone in 1C will be changed forever.

Narrated from the vantage point of six residents of 1C, The Perihelion is a novel set against the dystopian backdrop of near-future events. As the modern trappings of their Bluecore fall apart, each must strike his or her own separate path towards salvation. Their interlaced stories become a compelling exploration of moral deviation and ultimate redemption.

2 thoughts on “Excerpt: The Perihelion by D.M. Wozniak”