Today I am interviewing Randy Henderson, grand prize winner of the Writers of the Future, 2009 Clarion West graduate, and author of the new urban fantasy novel, Smells Like Finn Spirit, final book of the Finn Fancy trilogy.

DJ: Hey Randy! Thanks for agreeing to do this interview!

Randy Henderson: So if I do this interview, you release me from the binding circle, that’s the deal, right? Fine. I wouldn’t call that “agreeing” exactly.

A little bit about me? Well, interestingly, I only exist as long as you are reading something I’ve written. And you can either measure how fast I am writing, or where I am at in my writing, but not both.

DJ: What is Smells Like Finn Spirit and then the Finn Fancy Necromancy trilogy about?

Randy: I guess if you mashed up Dresden Files and the Addams Family, you’d be pretty close to the Finn Fancy series. I tried for a balance of dark fantasy adventure, and humor.

Finn is from a quirky family of magic users, and was framed for a crime back in 1986, at the age of 15, and his spirit banished to a Fey Other World while a changeling took his place here. At the start of the series, he is just returning to our world 25 years later to his 40-year-old body and immediately framed for a new crime.

The series follows his adventures as he tries to stop the people who framed him from ruining his life and from starting a magical race war. Along the way, he deals with his comically dysfunctional family, sasquatch mercenaries, gnome mobsters, unwanted body hair, a crazed jorōgumo, gets involved with some feyblood activists, starts a matchmaking service for magicals, and tries to figure out the whole dating thing himself.

In Smells Like Finn Spirit, everything comes to a head when the bad guys hatch a plan for a Feypocalypse. Finn, his family and his girlfriend are caught right in the middle of it. Book 3 also features some 90s humor and a couple of scenes inspired by 90s video games.

DJ: What were some of your influences for the Finn Fancy Necromancy trilogy?

Randy:   My biggest influence on book one was just the desire to have some fun with it. My magic system was definitely influenced by Master of the Five Magics by Lyndon Hardy; the humor probably by Douglas Adams, Terry Pratchett, and Monty Python; the ensemble cast dynamic probably Buffy the Vampire Slayer and Firefly, and the decision to have it be a family instead of the lone wizard hero was inspired by the fact I was binge watching Arrested Development at the time.

Book 2 was inspired by the fact that I had a contract and a deadline, and also by the fact book one was pretty consistently called “fast-paced and funny” and I was totally stressed that readers wouldn’t find the sequel as much so.

Book 3, Smells Like Finn Spirit, was inspired by all of the above, plus the desire to create a satisfying trilogy arc.

Randy: Finn has been out of our world for 25 years, so initially his entire frame of reference is from 1986. The poor guy just wants to have some pizza and quality time with his girlfriend and catch up on the last 25 years of TV, music and games, but the magical world keeps pulling him into danger. And he has to deal with his family.

Younger brother Pete thinks he’s a waerwolf because of a childhood dog bite. Hacker and snark-queen sister Sammy is allergic to magic. Older brother Mort is a jerk who’s in deep trouble with gnome mobsters and ghostly booty calls. Father is a mad inventor who can create wonders with an Easy Bake Oven, two doves and some crystals.

DJ: What is the world of the Finn Fancy Necromancy trilogy like?

Randy: It is set in our world, in the small but magical seaside town of Port Townsend, Washington. I had a lot of fun making up alternative histories and magical secrets around a lot of the iconic and quirky locations in the area.

DJ: How have the reviews been from readers, bloggers, and reviewers for the first two books of the Finn Fancy Necromancy trilogy? Is there anything that your audience seems to be particularly enjoying or is eager to find out more about?

Randy: Reviews have been almost universally positive, most of them along the lines of “Fast-paced and funny.” I’ve had some criticism that because of the pace, there wasn’t enough time spent with each of the characters. But I hope that Smells Like Finn Spirit gives them more quality time with the characters, and the trilogy as a whole creates some nicely satisfying character arcs.

DJ: A common theme I have seen among reviews for the first two books in the Finn Fancy Necromancy trilogy is the love for your humor.

Humor can be hit or miss depending on the person, so what type of humor do you write? What do you think the benefits of adding that humor to a story are?

Randy: The humor in the Finn Fancy books mostly comes from Finn’s point of view, his observations and comments.

There is also some humor that is inherent in the world itself – you have gnome mobsters, sasquatch mercenaries, evil PTA witches, etcetera.

One thing I’ve tried to do as the series evolved was to avoid mean humor. There are lots of places where I make pop-cultural jokes or use humorous similes. There were times when it would have been an easy laugh to make fun of some real celebrity or person, for example, play on someone’s well-publicized mistakes or “crazy” behavior, etcetera. But in those cases I instead tried to use fictional or mythical characters, or a different kind of joke entirely.

DJ: What was your favorite part about writing Smells Like Finn Spirit?

Randy: The back and forth between Finn and Dawn. Exploring the Fey Other Realm. The videogame-related scenes. Merlin and J. Lots of Sammy. The Baby Boomer. There were lots of things that made me smile as I wrote them, and feel some level of pride or amusement — or at least relief — that they’d come out of my brain.

Overall, my favorite part was just feeling like I’d grown a bit as a writer and that I’d managed to produce a book worth reading in the time given. When you are facing the blank page, or the emotion crisis of the middle of the novel, it never feels certain that you will.

DJ: What do you think readers will be talking about most once they finish Smells Like Finn Spirit?

Randy: Merlin (a stoner druid living on the Oregon border). Or autozombitons. The means of Finn’s epic emotional victory. The climactic Big Magic battle and revelations. And the ending.

DJ: What was your goal when you began writing the Finn Fancy Necromancy trilogy? Is there a particular message or meaning you are hoping to get across when readers finish it? Or is there perhaps a certain theme to the story?

Randy: I began writing it just to have fun, to reconnect with the joy of writing, and my love of fantasy. When an editor read that opening and told me she’d read the full manuscript when it was finished, my goal was to write a book that was funny, and kept the reader turning the page, and to not disappoint in the ending. Then when that book sold and it became a series, my goal was to create an interesting and fun world, to give the series a bit of depth, and to help Finn grow as a character, while still trying to keep it funny and page-turny.

Randy: I had no initial plan to write a Finn Fancy series. When I sold the first book and they wanted two more, I created paragraph-long proposals for the next few books, with a general story arc in mind so that if the series ended the readers wouldn’t be left hanging with a bunch of open story threads. But I basically made each book up as I went along, with books 2 and 3 being written under deadline so whatever I came up with, that is what got published. And I feel pretty good about that. I proved to myself that I could conceive, write, and revise a novel in basically about 6 months.

DJ: Now that Smells Like Finn Spirit is released, what is next for you?

Randy: I am working on a second-world epic fantasy, and a magepunk YA. I think they are both pretty awesome, but then I’m probably biased. Hopefully one or both will get picked up for publication though.

Randy: Can you release me from the binding circle now? It’s starting to itch.

*** Finn Fancy Necromancy is published by Tor Books and is available TODAY!!! *** 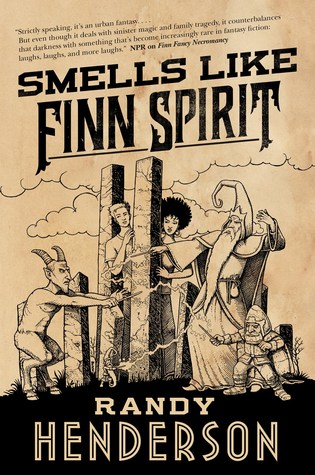 Randy Henderson continues his dark and quirky urban fantasy series set in a world of arcane beings hidden among the mundane townies of Port Townsend, Washington

Finn Graymare is back in the final installment of Randy Henderson’s Familia Arcana series.

Finn’s re-adaptation to the human world is not going so well. He’s got a great girlfriend, and is figuring out how things like the internet work, but he is still carrying the disembodied personality of Alynon, Prince of the Silver Demesne, the fae who had occupied his body during his imprisonment. And he’s not getting along at all with his older brother. And oh, by the way, his dead grandfather is still trying to possess him in order to bring about Armageddon.

Randy was the Golden Pen Grand Prize winner of Writers of the Future in 2014.

Randy’s short fiction has been spotted frolicking in places like Penumbra, Escape Pod, Realms of Fantasy, Every Day Fiction, and anthologies. He is a Clarion West graduate, a relapsed sarcasm addict, and a milkshake connoisseur who transmits suspiciously delicious words into the ether from his secret lair in the Pacific Northwest.