Today I am interviewing Lee Irby, my former college professor and gym buddy, and author of the new thriller novel, Unreliable.

DJ: Hey Professor Irby! Thanks for agreeing to do this interview!

Lee Irby: I’m a history professor at Eckerd College who has published three novels in addition to my usual scholarship, which is on trailer trash as a cultural construct.

DJ: What is Unreliable about?

Lee: The novel is about a writing instructor named Edwin Stith, who drives home to Richmond, VA, for his mother’s wedding. He’s done something, we’re not sure what, and since he’s a failed novelist, he understands the conventions of the mystery/thriller genre, and so he toys with the reader—has he killed his ex-wife? A waitress at a TGI Friday? Is he on a killing spree—or is he just a lonely man with few friends and a boring life he despises?

DJ: What were some of your influences for Unreliable?

Lee: Edgar Allan Poe. He is from Richmond, as I am, and I based the entire story off of his last trip to Richmond before he died, when he re-united with an old flame whose brother hated Poe. That became the outline of my plot.

Lee: Edwin wants to be a good son and he tries to make the wedding go off without a hitch. But he has demons he wrestles with and disclosing them in detail takes away from the experience of the book. He’s really into hats and music and the fineries of life…and his mother’s husband is bringing with him two very troubled adult children.

DJ: With Unreliable, it is being said that you have “crafted a sizzling modern classic of dark urges, lies, and secrets that harks back to the unsettling obsessions of Edgar Allan Poe.”

Could you elaborate on where you believe this comparison to Poe comes from?

Lee: Poe looms over the entire novel…there are references to many of his classic tales, and Edwin takes on the urgent, manic voice of Poe’s best narrators. He knows Poe’s work and his legacy in Richmond, and he mulls on Richmond’s most celebrated literary son.

DJ: What was your favorite part about writing Unreliable?

Lee: I loved how I wrote it out in long-hand, like I did my earliest novels…this was a true labor of love and every step has been enjoyable.

DJ: What was your goal when you began writing Unreliable? Is there a particular message or meaning you are hoping to get across when readers finish it? Or is there perhaps a certain theme to the story?

Lee: The theme that Edwin goes back to again and again is one of revolution—and the legacy of slavery in the South. The book is purposefully set over the three days of the battle of Gettysburg, and so this story is really a rumination on how the South must deal with its past. And how academics should practice what they preach.

DJ: When I read, I love to collect quotes – whether it be because they’re funny, foodie, or have a personal meaning to me. Do you have any favorite quotes from Unreliable that you can share with us?

Lee: “The dead will die again.” This is from the opening paragraph and sums up the book in one sentence, on multiple levels.

DJ: Once Unreliable is released, what is next for you?

Lee: I’m writing a novel called THE THREE OBEDIENCES, and it’s the story of three women who get caught in a very dangerous situation—two in the US, one in China—and yet their lives are interconnected. It’s a very unconventional thriller.

DJ: Before we go, what is that one thing you’d like readers to know about Unreliable that we haven’t talked about yet?

Lee: My career was in the toilet when I wrote this, and so for Doubleday to publish it, to grant me a new life, is unheard of among major publishers. This can mean only one thing: they believe in the quality of the work. Period. Doubleday isn’t publishing this because I’m a name author or because I’m successful—they’re publishing it because my editor was blown away by this book. That is very gratifying for me.

DJ: It was great talking to you again, Professor Irby! And thank you so much for taking the time to answer my questions!

*** Unreliable is published by Doubleday Books and is available TODAY!!! *** 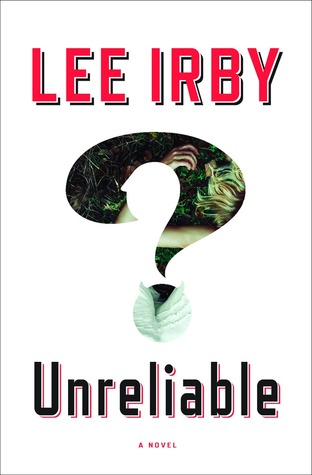 Riotous and riveting, this is the story of a charming college professor who most definitely did not—but maybe did—kill his ex-wife. Or someone else. Or no one. Irby plays with the thriller trope in unimaginably clever ways.

Edwin Stith, a failed novelist and college writing instructor in upstate New York, is returning home for the weekend to Richmond, Virginia, to celebrate his mother’s wedding—to a much younger man. Edwin has a peculiar relationship with the truth. He is a liar who is brutally honest. He may or may not be sleeping with his students, he may or may not be getting fired, and he may or may not have killed his ex-wife, a lover, and his brand-new stepsister.

Stith’s dysfunctional homecoming leads him deep into a morass of long-gestating secrets and dangers, of old-flames still burning strong and new passions ready to consume everything he holds dear. But family dysfunction is only eclipsed by Edwin’s own, leading to profound suspense and utter hilarity. Lee Irby has crafted a sizzling modern classic of dark urges, lies, and secrets that harks back to the unsettling obsessions of Edgar Allan Poe—with a masterful ending that will have you thinking for days.

Born in Richmond, Virginia. Raised on the southside near the banks of the James River. Attended the University of Virginia and studied History and English. After graduation embarked on a journey to various outposts of civilization, before landing in Key West in 1990. Tended bar. Sold art. Got married.