Today I am interviewing Kieran Shea, author of the new science-fiction novel, Off Rock.

DJ: Hey Kieran! Thanks for agreeing to do this interview. For readers who aren’t familiar with you, could you tell us a little about yourself?

DJ: What is Off Rock about?

Kieran: Essentially it’s a black comedy about temptation, bad choices, and the things that, even when you think you have it all figured out, inevitably go wrong. There’s more than a dash or two of satire regarding corporate downsizing.

DJ: What were some of your influences for Off Rock?

Kieran: Well, a lot of places. Caper comedies for one. Two, I’d have to say Gerry Anderson. I watched a lot of Space:1999 and UFO and all that “Supernarionation” stuff. Journey to the Far Side of the Sun freaked me out when I was a kid.

Kieran: Jimmy Vik is an everyman who’s a bit bewildered by what’s become of him after a couple of decades of blue collar work in the interstellar mining industry. Having little to show for his efforts, he’s aware his days are numbered and he wants out for good. When he discovers an unexpected gold pocket, Jimmy decides to thumb his nose at the status quo and rip off the company. Like anything worth doing in life, he needs to take an enormous risk. As for Jimmy’s quirks, he builds models and raises terrarium plants in his idle time. Picture a breezy, bohemian gent that likes rugby and partying who’s not as smart as he thinks he is.

DJ: What is the world and setting of Off Rock like?

Kieran: I’d say ninety percent of the action takes place inside a worse for wear, modular space station. The station is situated on a small planetary object called Kardashev 7-A, and its workers are a rangy cast of expendable misfits and roughnecks from Earth. Business is the rule of law. As for technology, I tried to project a ho-hum ordinariness to everything. Deep space travel, for example, is like taking a public coach or bus—the smelly one that’s packed with derelicts and has a game of Three-card Monte going on in the back.

DJ: What was your favorite part about writing Off Rock?

Kieran: I think the on-and-off romance between Jimmy and his ex-girlfriend Leelawati (Leela) Pendergast. It’s sort of an apology note to a lot of girls I screwed over. Not something I’m proud of, but that’s the truth.

Kieran: I don’t know. There’s plenty in the book that’ll offend just about everyone. There’s a pretty high body count, lots of debauchery, grand larceny at the workplace, but I think what’s universal about the story is the appeal of breaking free and reinventing yourself. I know I’ve done that several times.

DJ: What was your goal when you began writing Off Rock? Is there a particular message or meaning you are hoping to get across when readers finish it? Or is there perhaps a certain theme to the story?

Kieran: If you want to change your life, change it. Regrets suck.

DJ: When I read, I love to collect quotes – whether it be because they’re funny, foodie, or have a personal meaning to me. Do you have any favorite quotes from Off Rock that you can share with us?

Kieran: A foodie, huh? There’s quite a lot of food in the book and a big feast near the end. And candy, lots and lots of candy… That was fun, coming up with names for candies in the future: Super Sour Waddlee Wees, Mookoomarsh Bars, and Whiplash Pogoes. But let’s see, a quote? “Wow, if you think space is cold…”

DJ: Now that Off Rock is released, what is next for you?

DJ: Before we go, what is that one thing you’d like readers to know about Off Rock that we haven’t talked about yet?

Kieran: It’s funny, but the whole novel grew out of a short story. It was my first stab at science fiction, and I can’t believe this many years later I made it into a novel .

Kieran: It’s been an honor, thanks for having me.

DJ: Thank you! It was great having you! 🙂

*** Off Rock is published by Titan Books and is available TODAY!!! *** 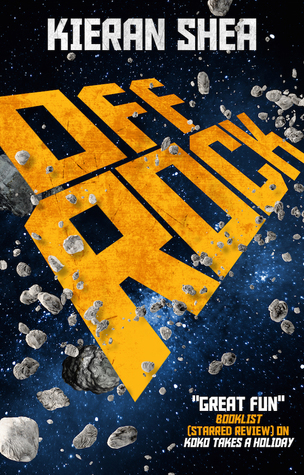 From the author of the acclaimed Koko series, Kieran Shea, comes Off Rock, a wickedly funny and lightning-paced bank heist set in space. “Great fun” Booklist starred review on Koko Takes a Holiday.

In the year 2778, Jimmy Vik is feeling dissatisfied.
After busting his ass for assorted interstellar mining outfits for close to two decades, downsizing is in the wind, his ex-girlfriend/supervisor is climbing up his back, and daily Jimmy wonders if he’s played his last good hand.

So when Jimmy stumbles upon a significant gold pocket during a routine procedure on Kardashev 7-A, he believes his luck may have changed—larcenously so. But smuggling the gold “off rock” won’t be easy.

To do it, Jimmy will have to contend with a wily criminal partner, a gorgeous covert assassin, the suspicions of his ex, and the less than honorable intentions of an encroaching, rival mining company. As the clock ticks down, treachery and betrayal loom, the body count rises, and soon Jimmy has no idea who to trust.

KIERAN SHEA’s fiction has appeared in dozens of venues including Ellery Queen Mystery Magazine,Thuglit, Dogmatika, Word Riot, Plots with Guns, Beat to a Pulp, Crimefactory, and Needle: A Magazine of Noir …as well as in some beefy-looking anthologies most of which will make you question the tether of his shiny, red balloon. To his self-deprecating astonishment he’s also been nominated for the Story South’s Million Writers Award twice without sending the judges so much as a thank you note. He co-edited the satiric transgressive fiction collection D*CKED: DARK FICTION INSPIRED BY DICK CHENEY and his debut novel KOKO TAKES A HOLIDAY is out now from Titan Books. Kieran divides his time between 38°58′22.6″N- 76°30′4.17″W and 39.2775° N, 74.5750° W.