DJ: Hey Cassandra! Thanks for agreeing to do this interview!

Cassandra Rose Clarke: I’m a writer living in Houston, and I love to write across genres and age groups. I have two cats named Robert and Cheeto. I’m also a teacher.

DJ: What is Star’s End about?

Cassandra: Star’s End is a space opera crossed with a family drama. The main character, Esme Coromina, slowly uncovers some dark family secrets related to her father and her youngest sister, and she has to learn how to deal with the ramifications. And all of it takes place in space!

DJ: What were some of your influences for Star’s End?

Cassandra: The biggest influence was actually the Alien movies! One of the recurring themes in those movies is the way Weyland-Yutani, the evil corporation, is always trying to weaponize the xenomorphs. This is such a clearly terrible idea that I always wondered why there pursued it so relentlessly. Then I started imagining what might happen if they were successful. And that was the seed for Star’s End.

Cassandra: Esme is a pretty flawed character. She is pulled between doing what she feels is right and fulfilling her father’s expectations for her. She cares deeply about her sisters but often struggles with showing that in any meaningful way.

DJ: What is the world and setting of Star’s End?

Cassandra: The universe doesn’t really have a name (I’m terrible at coming up with names so I try to avoid naming stuff whenever I can!). It’s set very far into our future, when humans have discovered how to handle faster-than-light travel and have colonized other planets. The book takes place on a planet system that’s ruled as a corporatocracy, which basically means the government is also a corporation looking to earn a profit (which this particularly company mostly earns through weapons manufacture). It’s definitely not an ideal system for the people living on the planets.

DJ: What was your favorite part about writing Star’s End?

Cassandra: I loved writing the aliens in this book. I don’t want to give too much away about them, but I wanted to make them as inhuman as I could while still showing them as sympathetic. It was an interesting challenge, and something I hadn’t really done before.

Cassandra: If I’ve done my job right, hopefully about how the book made them cry! That’s always my goal as a writer 😉

DJ: What was your goal when you began writing Star’s End? Is there a particular message or meaning you are hoping to get across when readers finish it? Or is there perhaps a certain theme to the story?

Cassandra: I was really interested in exploring familial relationships here, especially the relationships between sisters. Like I said in the description, it really is a family drama set in space, with aliens. I also wanted to look at how a drive for money and profit can corrupt us, which is something that is explored through both Esme and her father.

DJ: When I read, I love to collect quotes – whether it be because they’re funny, foodie, or have a personal meaning to me. Do you have any favorite quotes from Star’s End that you can share with us?

Cassandra: “It was cloudy, too cloudy for stars. But all three moons were visible. Catequil, cleaved in half. Amana, a sideways smile. Quilla, a sideways frown.”

DJ: Now that Star’s End is released, what is next for you?

Cassandra: I’m a writer for a serialized project called The Witch Who Came in From the Cold, and new episodes are currently being released every Wednesday through Serial Box. And next year, a bound edition of my book The Wizard’s Promise and its previously unreleased sequel will be released by Saga Press.

Cassandra: Thanks for having me! 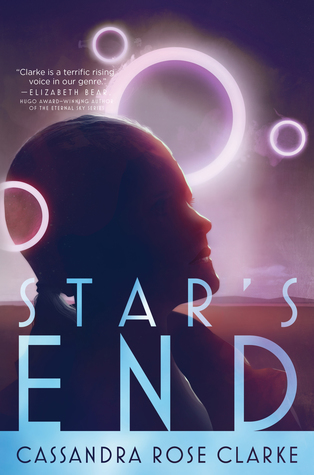 A world on the cusp of a new age…
The young nation of Fatrasta is a turbulent place — a frontier destination for criminals, fortune-hunters, brave settlers, and sorcerers seeking relics of the past. Only the iron will of the lady chancellor and her secret police holds the capital city of Landfall together against the unrest of an oppressed population and the machinations of powerful empires.

Sedition is a dangerous word…
The insurrection that threatens Landfall must be purged with guile and force, a task which falls on the shoulders of a spy named Michel Bravis, convicted war hero Mad Ben Styke, and Lady Vlora Flint, a mercenary general with a past as turbulent as Landfall’s present.

The past haunts us all…
As loyalties are tested, revealed, and destroyed, a grim specter as old as time has been unearthed in this wild land, and the people of Landfall will soon discover that rebellion is the least of their worries.

​Cassandra Rose Clarke grew up in south Texas and currently lives in a suburb of Houston, where she writes and teaches composition at a pair of local colleges. She holds an M.A. in creative writing from The University of Texas at Austin, and in 2010 she attended the Clarion West Writer’s Workshop in Seattle. Her work has been nominated for the Philip K. Dick Award, the Romantic Times Reviewer’s Choice Award, and YALSA’s Best Fiction for Young Adults.