Today I am interviewing Antonia Honeywell, debut author of the new speculative fiction novel, The Ship.

DJ: Hey Antonia! Thanks for agreeing to do this interview!

Antonia Honeywell: Hello DJ – it’s a pleasure to be here. Thank you for inviting me. I’m a British writer, thrilled that my first novel is making the trip across the Atlantic and hoping that one day I’ll get to follow in person. As well as writing, I bake, make jam, teach, play piano and sing in an award-winning barbershop chorus. And I drink a lot of tea.

DJ: What is The Ship about?

Antonia: The Ship is about a world in collapse, and a girl trying to find her future. Lalla Paul’s father is wildest-dreams wealthy, and he knows he cannot keep his daughter safe in a world that’s falling apart, so he buys a huge luxury cruise ship and stocks it not only with food, but with art materials and sports equipment and the digital contents of every library, museum and art gallery in the world. He finds 500 worthy people – good, kind, loving people – and offers them sanctuary on the ship in return for providing a nurturing environment in which his daughter can grow up. However, he doesn’t make allowances for the fact that his sixteen-year old daughter might just have ideas of her own, and that she, alone on the ship, may have questions he doesn’t want to answer.

DJ: What were some of your influences for The Ship?

Antonia: I read a lot, so it’s hard to tease out exactly what’s influenced me, but I love the work of Margaret Atwood and the way that she uses speculative futures as a meditation on the state of the world. I read and loved John Wyndham, John Christopher and Ursula le Guin growing up, and their alternative universes, in which I found my own thoughts and feelings reflected, have stayed with me. I read a great deal of non-fiction, too, and am fascinated by the way that repressive regimes have risen and taken over democratic systems all over the world, throughout history. It’s too easy to sit back and ask, ‘How could people let that have happen?’ It’s much harder to interrogate ourselves and our own influence upon the times into which we’re born.

Antonia: I think everyone will find something to identify with in Michael, the father who puts his desire for his child’s safety and happiness above every other consideration. Whether that means everyone will agree with what he does is another question entirely!

Lalla, though, is the reason I wanted to tell the story. In order to accept the future that her father has planned, invested in and prepared for her, she has to unconditionally accept his view of the world and what’s happening in it, the way that everyone else on the ship does. As the story progresses, and Lalla learns more about herself, she asks more and more questions. In a world that’s been created entirely for her, this comes across at times as rank ingratitude. But I think any reader who’s ever had cause to question the world view in which they’ve been raised will identify with her.

DJ: What is the world and setting of The Ship like?

Antonia: The opening of the novel is set in London, in a parallel present. Global environmental catastrophe, political instability and massive food shortages have led to riots, insecurity and a military takeover. By issuing registered citizens with cards, the government is able to refuse any responsibility for anyone who does not have an identity card. It’s a violent, restrictive and frightening world where terrible things can and do happen. The ship, by contrast, is a place of peace and plenty, where the people Michael Paul has chosen are able to eat three meals a day, read, create art, learn new skills from each other and make friends. It’s still a dictatorship, but a benevolent one – on the surface at least.

DJ: What was your favorite part about writing The Ship?

Antonia: I loved planting all the small indications of Michael Paul’s intentions for Lalla and for the future of the ship – things the reader understands far better than Lalla, with her sheltered upbringing. The story unfolds on two levels – Lalla’s first person narrative, and the reader’s more developed and sophisticated reading of it. The events that remind the reader that there are certain experiences that are Lalla’s alone – which neither her father nor the reader can moderate – were perhaps my favourite to write. We must all exist as a valuable part of society, but there are aspects of our lives that no one has the right to dictate or take away.

Antonia: Whether or not they’d get on the ship themselves! And their reactions to the ending.

DJ: What was your goal when you began writing the Ship?

Antonia: My primary goal was to tell a good story well – for me, that’s the whole point of creating a work of fiction. But what I wanted to do with my story was to ask questions about the assumptions we make about the world we live in, and our experience of it. I’ve had wonderful reactions from readers who’ve found themselves out of step with what their friends and family expect of them, or who’ve had their world views challenged in a range of ways. I love the power the right novel at the right time has to take a reader way, way beyond their own experience and simultaneously deeper inside it, and I’m deeply grateful to readers who’ve taken the time and trouble to let me know that The Ship has been that novel for them.

DJ: When I read, I love to collect quotes – whether it be because they’re funny, foodie, or have a personal meaning to me. Do you have any favorite quotes from The Ship that you can share with us?

DJ: Now that The Ship is released, what is next for you?

Antonia: I owe my family a bit of attention and care! And it’ll take me a while to get over the excitement of holding a copy in my hands – being stuck all the way over the pond means I haven’t seen a finished copy of the US edition yet, and I’m very excited about that. But I haven’t stopped writing, and I won’t, so hopefully we’ll be hearing from each other again.

I love connecting with readers and can easily be found at

DJ: Before we go, what is that one thing you’d like readers to know about The Ship that we haven’t talked about yet?

Antonia: The apple. That apple’s really important. And if you get annoyed with Lalla’s ingratitude – especially in her early days on board – just ask yourself what life would be without the crisp sharpness of a fresh apple.

Antonia: It’s been a pleasure – thank YOU. 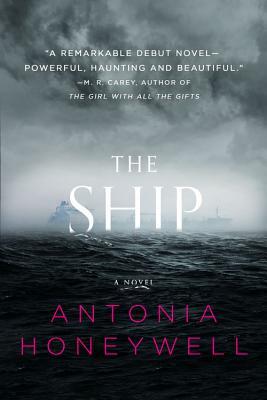 London is burning and Lalla has one hope for survival, a ship–a new Noah’s Ark–that can only save 500 people, in this “Powerful, haunting, and beautiful” (M. R. Carey) debut novel.

London burned for three weeks. And then it got worse…

Young, naive Lalla has grown up in near-isolation in her parents’ apartment, sheltered from the chaos of their collapsed civilization. But things are getting more dangerous outside. People are killing each other for husks of bread, and the police are detaining anyone without an identification card. On her sixteenth birthday, Lalla’s father decides it’s time to use their escape route–a ship he’s built that is only big enough to save five hundred people.

But the utopia her father has created isn’t everything it appears. There’s more food than anyone can eat, but nothing grows; more clothes than anyone can wear, but no way to mend them; and no-one can tell her where they are going.

Antonia Honeywell studied English at Manchester University and worked at the Natural History and Victoria and Albert Museums in London, running creative writing workshops and education programmes for children, before training as a teacher. During her ten years teaching English, drama and film studies, she wrote a musical, and a play which was performed at the Edinburgh Festival. She has four young children and lives in Buckinghamshire. The Ship is her first novel.