DJ: Hey Cherie! Thanks for agreeing to do this interview!

Cherie Priest: I’m a Leo who was born in Florida, on the day Jimmy Hoffa disappeared. Also, I write books. I’ve had about twenty published, mostly in sci-fi/fantasy/horror genres – though recently I’ve also begun to write for young adults.

DJ: What is Brimstone about? 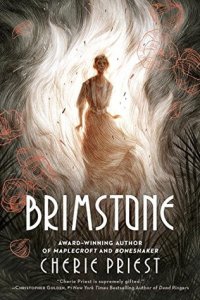 Cherie: A talented young clairvoyant and a shell-shocked veteran of the Great War who came back from the front with the ghost of a vengeful German poltergeist. In a nutshell. It’s largely set in Cassadaga, Florida, a real-life historic spiritualist camp not terribly far from Orlando.

DJ: What was your favorite part about writing Brimstone?

Cherie: Going down to Cassadaga for a few days, to do research and get a feel for the place. Everyone was just lovely, and I had a most excellent time kicking around with my cousin (who lives nearby – and was kind enough to let me crash with her).

DJ: Now that Brimstone is released, what is next for you?

Cherie: It depends a bit on publication schedules, but I believe my next publication is INDIGO (through St. Martin’s), a mosaic book – written by me and about ten other people, edited together by Christopher Golden. Then in December, I’m in another group project – a new Wild Cards book called MISSISSIPPI ROLL. After that, I’ll have THE TOLL coming from Tor in 2018, and later in 2019 THE AGONY HOUSE from Scholastic.

DJ: Before we go, what is that one thing you’d like readers to know about Brimstone that we haven’t talked about yet?

Cherie: The Chihuahua lives happily ever after. I never kill off the animals in my books. People are never so lucky.

DJ: Thank you so much for taking time out of your day to answer my questions! I really appreciate it 🙂

Cherie: Hey, thanks for having me! 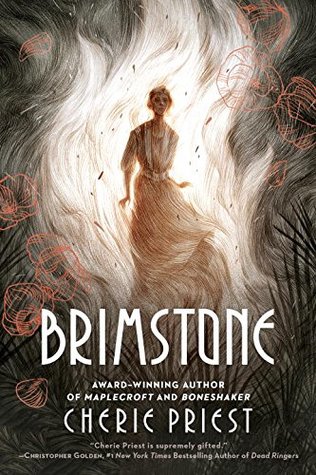 In the trenches of Europe during the Great War, Tomás Cordero operated a weapon more devastating than any gun: a flame projector that doused the enemy in liquid fire. Having left the battlefield a shattered man, he comes home to find yet more tragedy—for in his absence, his wife has died of the flu. Haunted by memories of the woman he loved and the atrocities he perpetrated, Tomás dreams of fire and finds himself setting match to flame when awake….

Alice Dartle is a talented clairvoyant living among others who share her gifts in the community of Cassadaga, Florida. She too dreams of fire, knowing her nightmares are connected to the shell-shocked war veteran and widower. And she believes she can bring peace to him and his wife’s spirit.

But the inferno that threatens to consume Tomás and Alice was set ablaze centuries ago by someone whose hatred transcended death itself…. *Christopher Golden, #1 New York Times Bestselling Author

Cherie Priest is the author of more than a dozen books, including the steampunk pulp adventures Dreadnought, Clementine, Ganymede, and Boneshaker. Boneshaker was nominated for both the Hugo Award and the Nebula Award; it was a PNBA Award winner, and winner of the Locus Award for Best Science Fiction Novel. Cherie also wrote Fathom and the Eden Moore series from Tor (Macmillan), Bloodshot and Hellbent for Bantam, and three novellas published by Subterranean Press. In addition to all of the above, she is a newly minted member of the Wild Cards Consortium – and her first foray into George R. R. Martin’s superhero universe, Fort Freak (for which she wrote the frame story), debuted in 2011. Cherie’s short stories and nonfiction articles have appeared in such fine publications as Weird Tales, Subterranean Magazine, Publishers Weekly, The Living Dead 2, and the Thackeray T. Lambshead Cabinet of Curiosities. She presently lives in Chattanooga, TN, with her husband, a fluffy young dog, and a fat black cat.