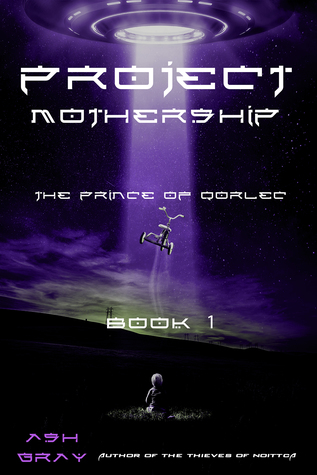 Rose, a sweet and kind librarian, is on her honeymoon with her goofy gym teacher husband when the trip takes a turn for the worst and she is abducted by aliens. When the spacecraft is attacked by the enemies of Empress Nashal, Rose makes it back to Earth freshly impregnated by alien royalty with said enemies on her heels. Now faced with running for her life, she is joined by Zita, a cheerful alien marine, and must make the choice between her unborn alien child and her baffled husband, who believes the child is his.

*I have thirty (30) free ebooks copies of Project Mothership to go along with this excerpt! The link and details for the giveaway are located at the bottom of the post, following the excerpt 🙂

“Well, as McDonald’s says, have it your way,” said Zita with a shrug. She frowned. “Or is that Burger King?” Rose saw her reflect a moment before shaking it off. “Doubt I need to tell you that more FBI goons will be here shortly.” She glanced at one of the houses, in the window of which a woman stood gaping. “Thanks in no small part to your neighbors. The other agents spread out and were checking different houses while we were having a drink. Some are still down the street harassing people. Shooting out those tires might hold them back a while. Nice shootin’, by the way, Tex.”

Rose staggered to a stop when she saw Zita insert her key in a honda. It was bright yellow with a large pair of red novelty lips on the antennae, and considering the fact that very few people today even drove cars that ran on gasoline, it was the most screamingly conspicuous vehicle they could have used. Yet Zita slid behind the wheel without hesitation. She paused with one long, slender leg out of the car and looked up at Rose.

“I’m not getting into that thing,” Rose said at once. “You’re out of your mind! If we’re not stopped by every officer between here and – wherever you’re taking us –!”

“Listen, Rose,” said Zita wearily and leaned her forearm on the wheel. She stuck a cigarette in her mouth, and her bloody hand shook a little as she struggled to light it. “You listenin’?”

“I been living here on your oblivious little planet for going on sixty years now,” Zita said.

“And you know how I was never noticed? Never caught by the feds or even got a damn parking ticket?”

With the cigarette lit, Zita exhaled smoke and smiled. “I hid in plain sight.” She pulled her leg in the car and shut the door. “Now get in.”

Rose’s heart skipped a beat when she saw an FBI agent running down the street at them. She ran around the other side of the car and climbed in, and seeing her get inside with Quinn, the agent tossed his plasma rifle and ran full tilt, his face solemn behind his black glasses.

With Quinn in her lap, Rose scrambled to strap the seatbelt across them both. “What are you waiting for? He’s coming!”

“Paaaatience, grasshoppa,” said Zita around the cigarette in her mouth. Her hand closed on the stick shift, and she didn’t look at what she was doing, her eyes fixed instead on the rearview mirror.

“God, and it’s a stick?” Rose said in exasperation and tossed her hands. “We might as well turn ourselves over!”

“Geez, what a pessimist,” Zita muttered with a small smile. “Quiet. I’m parallel parked and I need to concentrate.”

“What? Who’s worrying about that now?”

“Juuust a little closer, you sonova bitch,” Zita muttered, eyes fixed on the man in the rearview mirror.

Rose scowled. “Could you not swear in front of my –” Her voice trailed away to a scream when a giant hammer launched out of the trunk. As the man was finally closing in, the hammer came down on him, shattering him in a cartoonish spray of screws. When the hammer lifted again, the man was a metal stain on the pavement. Several neighbors screamed as they stood on their step, and Rose felt just as horror-stricken to see the man’s smashed face reflected in the metallic glasslike coating on the hammer. The hammer retracted into the trunk again, and smiling, Zita started the car up. She didn’t acknowledge it when Rose just stared at her in silent shock.

Quinn, contrary to being horrified, was smiling and clapping her hands. “The man went smoosh, Mommy!” she said happily. “He can’t hurt us. He went smoosh.”

“Yes!” Rose agreed and hated how shrill and horrified her voice sounded.

Zita laughed softly. “And off we go,” she sang as they pulled onto the street.

“Glad to see you’re so satisfied,” Rose said sarcastically. She was appalled by Zita’s casual manner but had to remind herself that the woman wasn’t just a photographer: she was a soldier.

“Why shouldn’t I be satisfied?” Zita smiled and tapped the clock on the dash with a red nail. “We made this place more dangerous than L.A. in less than thirty-six minutes. That’s a record.”

Rose rolled her eyes, but she glanced down at Zita’s hand, which was operating the stick shift expertly. On the crown of the stick was a red button with the small black symbol of a hammer on it. She swallowed hard and looked out the window, wondering what other lethal contraptions the car hid.

They slid slowly into traffic, and though Rose wanted Zita to hurry, she knew going slowly would draw the least amount of attention. At least until the police or the FBI or whoever caught up with them. She wondered dismally if some of the neighbors hadn’t been too shocked to take down Zita’s license plate.

“Smoking is illegal, you know that,” Rose scolded. “What is that, a Camel? I thought Camels crashed in the last regression. Keep the smoke over there!” She waved the smoke away from Quinn.

Zita rolled her eyes and kissed out a wisp of smoke. “Are you always such a pill?”

Rose frowned. “It’s just that smoking could get us pulled over. Why couldn’t you have just been a pothead? Weed’s legal.”

“Not while driving, it’s not,” Zita pointed out with a breathless laugh.

“Don’t you have a car seat or something for my daughter?” Rose further admonished.

Zita snorted. “What does this look like? A nanny van?”

Rose scowled. “You said you’d been searching for us for years. Seems you would’ve been prepared.”

“Eh,” said Zita with a shrug. “I said I was searching. Never said I believed I would find you.”

“Now that you have, where are you taking us?”

“To safety . . .” Zita’s voice trailed off as her eyes glanced in the rearview mirror. “Shit.”

“Quinn’s got more to worry about than swearing at the moment, Rose!”

Rose glanced in the rearview mirror as well and her heart stopped. A man in a black suit was running toward them over the top of the cars that crowded the street. His face behind his black sunglasses was coldly solemn and determined. He carried no weapons, but as he was coming, his hands started to morph into long, silver knives.

“Do something!” Rose burst.

“Do what? This isn’t Terminator II —”

“Pull out the hammer thing!”

Zita shrugged. “I was drunk.”

Rose made an impatient noise.

“Relax,” Zita said, crushing her cigarette in the ashtray. Her lips curled into a small smile. “Buckle up.”

Before Rose could question the woman, Zita’s high heel pressed slowly on the gas, and without warning, they leapt forward like a bullet. Rose felt her entire body slap back against the seat, though Zita and Quinn were sitting as if nothing had changed, merely looking through the windshield as the car rocketed forward.

The little yellow Honda dematerialized, speeding through the other cars in a blur of color. Almost instantaneously, the car stopped again, but Rose could still feel her cheeks flapping in her eyes. Very slowly, she blinked and flexed her mouth, trying to work the cold stiffness out of her face. She thought for certain Quinn would be terrified, but the girl was giggling and clapping her hands instead.

“Yay!” Quinn squealed. “That was fun! We went swoosh!” She raised her hands to the ceiling in triumph.

Zita smirked, watching Quinn as she unbuckled her seatbelt. “Maybe the kid really is entirian after all.” She glanced at Rose and snorted a laugh to see the other woman sitting in mute shock with her hair flying. “You alright?”

Rose glared sideways at Zita. “You could have warned me.”

Zita slowly grinned. “Where’s the fun in that?”

Please click on the Rafflecopter link below to enter to win thirty (30) ebook copies of Project Mothership! Good luck!

Ash Gray is actually a dragon, writing her stories on a minuscule laptop in the murky dark of a silent, wet, cold, comfortable cave. Having quite large claws, she goes through laptops like tissue paper within the span of a week, but it is worth the effort, time, and money to share her stories with an audience as in-love with fiction as she.