DJ: Hey Bryn! Thanks for agreeing to do this interview! For readers who aren’t familiar with you, could you tell us a little about yourself?

Bryn Chancellor: Thanks for having me, DJ! I am a fiction writer currently living and teaching in Charlotte, NC, although I grew up in California and Arizona. Sycamore is my debut novel, but I also have a collection of short stories, When Are You Coming Home? Both the novel and stories are set primarily in Arizona.

DJ: What Sycamore about?

Bryn: The basic premise of the book is that a newcomer to the small town of Sycamore, Arizona, discovers bones in a dry ravine, which Sycamore’s longtime residents fear may belong to Jess Winters, a teenager who disappeared one night some eighteen years earlier. As the police investigate, the residents rekindle stories, rumors, and recollections as they revisit Jess’s troubled history. The book in part is about what happened to Jess, but for me it’s also very much about the people who were left behind and who grappled with Jess’s long absence in the midst of their own lives and troubles.

DJ: What were some of your influences for Sycamore?

Bryn: Probably the biggest literary influences are Elizabeth Strout’s Olive Kitteridge, Richard Russo’s Empire Falls, Kent Haruf’s Plainsong, all of which feature small towns and multiple perspectives. I wasn’t really thinking of the book as a mystery novel, though I do like mysteries and spy thrillers as well. I grew up loving Masterpiece Mystery and the Modesty Blaise series. One of my favorite books to teach is Jane Eyre, which thrums with secrecy and mystery.

I based the fictionalized town of Sycamore on the region where I grew up: the small town of Sedona, Arizona, and the neighboring town of Cottonwood, where I attended junior high and high school. A fictionalized version allowed me some distance to rearrange/create features and timelines that I needed. As with much of my writing, I wanted to explore the lives of working people who are sometimes overlooked, both in literature and in reality.

In many ways, I see this book as a love letter to my hometown.

Bryn: This is hard to answer about my own characters! In part, this is because Sycamore has thirteen (!) points of view, as well as several secondary characters, all of whom I wanted to give their own voices and particularities, imperfections, desires, fears, etc. I’m hopeful that readers find all of them distinctive and compelling and sympathetic (in the sense of understanding them). Creating such characters is at the heart of my desire to write and what I focus on the most. I love them all, even when they’re not at their best—maybe even more then.

For my characters, I think a lot about occupations. (I’m preoccupied by occupations?) Basically, the people I know work. I grew up in a working/middle class household, and I don’t know what a day would look like without going out to make a living. In fiction, I’m always a bit skeptical when people don’t work. I’m like, what are you doing out walking down the streets of New York in the middle of the day? What about rent? In story terms, financial strain can of course be a source of tension for a character, but that’s not really what drives me. I’m interested in what people do; in fiction, it’s an opportunity to consider why they do it.

DJ: What is the world and setting of Sycamore like?

Bryn: This is a realistic novel set in the small town of Sycamore in the high desert of Arizona, with two timelines: the present is 2009, the past 1991. The landscape is a major feature of the novel, as it’s a major feature of the real place. The desert is weird, in the best of ways. When we went to visit recently, my husband commented it was like walking around Mars. A place of contradictions, both tough and fragile. A ferocious beauty.

DJ: What was your favorite part about writing Sycamore?

Bryn: When I started this book, I didn’t know what had happened to Jess. I didn’t know her, or any of these characters, much at all. Part of the joy of writing for me is figuring it all out—that thrilling sense of surprise and discovery as you get to know your characters and place and what happens next and next and next. My outlines are the barest sketches because I want to leave open spaces to fill in and room to diverge if needed. I started out writing this book thinking I was writing short stories, but as I discovered the story of Jess, I began to interlink the stories and I had a novel on my hands. I had to stop worrying about what it was going to be and just focus on getting down the story in my head. I also wrote the first (messy) draft quickly, which is unusual for me. The heavy lifting, as always for me, came in revision. I think the whole book went through about seven drafts total. Some writers resist revision, but that is where I figure out what I’m really trying to do.

Bryn: Oh my gosh, I don’t know! So far, I’ve found people have certain characters who have become favorites, or that they couldn’t put it down and stayed up late to finish. Some readers have remarked on the emotional experience— i.e. “ugly crying” at the end. Sorry, except, not sorry. J I mean, I love to bawl at the end of a book, so if I can affect someone else the same way, I’m thrilled. I hope this is because of true sentiment and not sentimentality, which is something I think about and try to work on. One of my favorite responses so far is that it made the reader see the full poetic inner lives of ordinary people, and that after he finished it, he had started writing poetry in the mornings. That makes me unbearably happy. For me, the world would be far better off if we all started our mornings writing poems.

DJ: What was your goal when you began writing Sycamore? Is there a particular message or meaning you are hoping to get across when readers finish it? Or is there perhaps a certain theme to the story?

Bryn: I generally don’t set out with any theme in mind, trusting that themes and meanings will emerge if I stay focused on the characters and what drives them. I’m hopeful the reader will discover meanings as they bring their own lives and interests to the story.

DJ: When I read, I love to collect quotes – whether it be because they’re funny, foodie, or have a personal meaning to me. Do you have any favorite quotes from Sycamore that you can share with us?

Bryn: Oh, I love quotes, too—although I’ve never quoted myself! I’m not sure I can, actually—I know too much about how the lines were constructed—although I hope others find some they love along the way. But I can tell you that I was so happy to get permission for the epigraph, which is a line from John Doe’s song “Golden State”: “We are tangled/we are stolen/we are living where things are hidden.” I listened to that song repeatedly while writing the book, and it was an expected and lovely force in helping me unlock the story. I’m grateful to John and musicians and other artists everywhere for their work.

DJ: Now that Sycamore is released, what is next for you?

Bryn: Writing-wise, I’m in the early stages of another novel set in in Sycamore, possibly involving a minor character in this novel (a pharmacist turned priest). I also want to write some stand-alone short stories, a form I miss. I also will be doing some events in support of the novel and getting to meet readers along the way, which is fun and inspiring.

Bryn: I’m honored and grateful for readers, which I was myself long before I was a writer. Literature has been a constant in my life since I was a child, and I hope that my book can be a source of pleasure or escape or emotional connection as others have been for me over the years.

Bryn: Thank you, DJ! I appreciate your time and hope you enjoy the book!

*** Sycamore is published by Harper and is available TODAY!!! *** 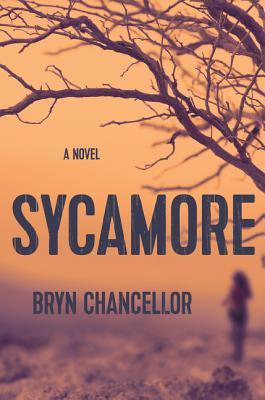 “Masterful. . . . What a joy to find a book that is both propulsive and perfectly composed.”— Cynthia D’Aprix Sweeney, author of The Nest

“Riveting. . . .This is a movingly written, multivoiced novel examining how one tragic circumstance can sow doubt about fundamental things. . . . a transporting vision of community, connection, and forgiveness.”—Publishers Weekly (Starred review, Pick of the Week)

An award-winning writer makes her debut with this mesmerizing page-turner in the spirit of Everything I Never Told You and Olive Kitteridge.

Out for a hike one scorching afternoon in Sycamore, Arizona, a newcomer to town stumbles across what appear to be human remains embedded in the wall of a dry desert ravine. As news of the discovery makes its way around town, Sycamore’s longtime residents fear the bones may belong to Jess Winters, the teenage girl who disappeared suddenly some eighteen years earlier, an unsolved mystery that has soaked into the porous rock of the town and haunted it ever since. In the days it takes the authorities to make an identification, the residents rekindle stories, rumors, and recollections both painful and poignant as they revisit Jess’s troubled history. In resurrecting the past, the people of Sycamore will find clarity, unexpected possibility, and a way forward for their lives.

Skillfully interweaving multiple points of view, Bryn Chancellor knowingly maps the bloodlines of a community and the indelible characters at its heart—most notably Jess Winters, a thoughtful, promising adolescent poised on the threshold of adulthood. Evocative and atmospheric, Sycamore is a coming-of-age story, a mystery, and a moving exploration of the elemental forces that drive human nature—desire, loneliness, grief, love, forgiveness, and hope—as witnessed through the inhabitants of one small Arizona town.

Bryn Chancellor’s debut novel, Sycamore, is out from Harper (May 9, 2017). Her story collection When Are You Coming Home? (University of Nebraska Press, Sept. 1, 2015) won the 2014 Prairie Schooner Book Prize, and her short fiction has appeared in Gulf Coast, Blackbird, Colorado Review, Crazyhorse, Phoebe, and elsewhere. Other honors include the Poets & Writers Maureen Egen Writers Exchange Award in fiction, and literary fellowships from the Alabama State Council on the Arts and the Arizona Commission on the Arts. A native of California raised in Arizona, she earned her M.F.A. in fiction from Vanderbilt University and is an assistant professor at the University of North Carolina at Charlotte.