Today I am interviewing Ryland Thorn, author of the new grimdark fantasy novel, Blood, first book of The Fae-Born Narratives.

DJ: Hey Ryland! Thanks for agreeing to do this interview!

Ryland Thorn: Thanks, DJ. What would like to know? I’m a long-time fantasy fan who grew up reading people like David Gimmell and Raymond E Feist and Orson Scott Card, and always knew that I was going to be a writer.

To begin, with that meant writing millions of words in the corporate world, but that was really boring!

So I’m now back doing what I always wanted to do, which is to write fiction.

I’m lucky enough to have been accepted into the groundbreaking Phoenix Prime author program, which is leading a fundamental change in the digital publishing world.

Other than that, I live in the spectacular Nelson region of New Zealand with my wife and a couple of cats, I spend most of my waking hours in front of the computer, and I like to get out and go kayaking or for a ride on my bike.

DJ: What Blood about?

Ryland: Here’s the blurb from Amazon:

What is the cost of revenge?

Overwhelmed by grief and hate, Marin Terrell is an empath who joins a company of soldiers to hunt down the wyverns and dragon that murdered his master.

His purpose is vengeance.

But when the soldiers manage to corner one of the wyverns, the outcome is awful. Haunted by visions of blood and monsters and his own painful death, Marin starts to have second thoughts. He wants to abandon the quest, but the leader of the soldiers is a tyrant who gives him no choice but to go on, no matter the peril.

Will they find the creatures they hunt? And if they do, how will Marin find a way to survive the carnage that will ensue?

What isn’t in the blurb is that Blood is the first of the novel length stories in the Fae-Born Narratives, but I have written a few short stories in the series as well. The idea is to create a world of complexity and depth that I’m hoping people will enjoy.

In terms of subject and tone, imagine what would have happened if Anne McCaffrey’s Dragons of Pern series had been written by David Gemmell instead.

Ryland: Marin Terrell is Fae born. His particular talent is that he can sense the emotions of others. For much of his life, he has worked as an apothecary and a healer, and has considerable knowledge of the plants and useful minerals in his world.

He starts the story in a world of pain, and he’s out for revenge.

Another major character is Captain Klave Mandow, who is the opposite of Marin in nearly every way. He is a huge, angry man, and the leader of a party of Battlemen who have been tasked with finding the wyverns. He believes that he has been sent on a fool’s mission, yet his peculiar sense of honor compels him to do all he can to complete it.

He is not above coercing Marin to mix poisons for the wyverns.

DJ: What is the world and setting of The Fae-Born Narratives like?

Ryland: The world Marin lives in is harsh. It is largely a desert land, and the people have to struggle to survive. Much of the story is set around the walled city of Balgeron (and the surrounding lands), which is as far north as people have settled, yet still far enough south that it is rarely attacked by wyverns and dragons and such like.
It’s a violent place where slavery is still common and strength of arms is important for most.

One of the more interesting aspects of the world is that the fauna is reptilian-based. Wyverns and dragons are known dangers, but there are also great wyrms and cold wyrms, and the people farm large reptilian creatures called strawhogs.

Within the general townsfolk, there are some who have Fae blood running in their veins. This gives them abilities that others don’t have. Marin is an empath, but there are others who can foretell the future or control fire.

Far from being celebrated, these people are often treated with disdain, so they tend to hide their abilities.

DJ: Tell us about your wyverns.

Ryland: The wyverns in Blood are about twice the size of a horse and disproportionately powerful. They are like small dragons, but with two legs instead of four, and instead of breathing fire, they spit acid.

They are malicious and cunning, and hunt in packs. Before the start of Blood, a pack of them descended onto Balgeron city and caused havoc. One of them landed in the courtyard of the castle and murdered half a dozen armed men before they could chase it away.

They are not the sort of creature you would like to meet.

The dragon, on the other hand, is quite different.

DJ: What was your favorite part about writing Blood?

Ryland: Getting it done so swiftly.

I’m not one of those authors who believes that speed and quality are mutually exclusive. In fact I believe that if you understand your world and characters well enough, you can get into a state of flow where everything goes more smoothly than it otherwise might.

That was the case with this one. I wrote Blood in a timeframe that most people probably wouldn’t believe, and I very much hope that I will be able to write future novels at the same speed.

Ryland: What I hope they will be talking about is a combination of things. It’s a grim story filled with loathing and fear and hatred, but also with hope. I hope they come away feeling very satisfied with what they have read, and looking forward to the next installment — which is focused less on the wyverns and much more on the Dragon!

DJ: When I read, I love to collect quotes – whether it be because they’re funny, foodie, or have a personal meaning to me. Do you have any favorite quotes from Blood that you can share with us?

Ryland: The following snippets should give you a pretty good indication of what the story is about. They’re in no particular order.

Marin could feel the man’s terror. He was convinced he was going to die, and with all the strength of Klave Mandow’s fury bearing down on him, Marin guessed that he was right.

“You heard my words,” the Captain grated. “I will tolerate no disunity among my men! Not even from you!” He strode forward with his fists clenched, and Marin did his best to scramble away. He was confused. “What do you think I’ve done?” he blurted.

As the smoke from the combined substances on the floor started to thicken, the hate and rage in Marin’s heart gained ascendancy over his grief. He felt as broken as the store, and yet he knew what he needed to do.

Marin’s inconsistent talent clicked in and he was nearly overwhelmed by the man’s pent up rage and hostility. But as well as that, Marin felt a fine thread of uncertainty weaving its way in between. “If you murder me, you’ll never find them,” Marin said.

The Captain answered slowly. “Lord Pilgray Stunge,” he began, his face twisting with venom and hate as he uttered the name. “His words suggest not. He spoke of heads. More than one. He said, ‘All of them!’ I do not think a single one will suffice.”

As he drew nearer, he once more felt a malevolent hate that was alien and savage. He’d sensed such feelings twice before, and knew them to come from the wyverns.

DJ: Now that Blood is released, what is next for you?

Ryland: As mentioned, I am part of the Phoenix Prime author program. One of the key aspects of that program is a reasonably insane publishing schedule. Over the next few months, I will be publishing the next two books in the Fae born narratives series, as well as a number of outlying short stories associated with that series. In addition, there are several side projects that I am working on.

As with Blood, these side projects all tend to have a dark feel to them, but that’s mostly because that’s the type of writer I am.

The genres will be slightly different. As well as grimdark, I am writing in urban fantasy and a new genre called techmage, which is a blend of science fiction and fantasy where both magic and technology exist.

DJ: Before we go, what is that one thing you’d like readers to know about Blood and The Fae-Born Narratives that we haven’t talked about yet?

Ryland: Remember when I said that the Phoenix Prime author program had a fairly insane publishing schedule? The next story in the series is due to go live in mid April. It’s a shorter story, novella length, and it’s called Fear. Look out for it. J

Ryland: As an author, the most important thing in my life are my readers. Ultimately, they are who I’m writing for. Not the reviewers, not other authors, not even my mum.

So if you download my stories, drop me a line and tell me what you thought. It’s the only way I can really know if I’m giving you guys what you’re looking for or not.

Ryland: My pleasure! Thank you for having me. 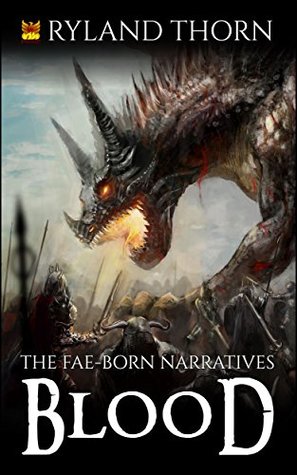 What is the cost of revenge?

Overwhelmed by grief and hate, Marin Terrell is an empath who joins a company of soldiers to hunt down the wyverns and dragon that murdered his master.

His purpose is vengeance.

But when the soldiers manage to corner one of the wyverns, the outcome is awful. Haunted by visions of blood and monsters and his own painful death, Marin starts to have second thoughts. He wants to abandon the quest, but the leader of the soldiers is a tyrant who gives him no choice but to go on, no matter the peril.

Will they find the creatures they hunt? And if they do, how will Marin find a way to survive the carnage that will ensue?

Blood is the new story from Ryland Thorn. It is the first novel in the Fae-Born Narratives, and was written to suit those who enjoy the works of Phil Tucker, AC Cobble, Garrett Robinson and the like.

Ryland Thorn is a ravenous fan of fantasy. He is part of the ground-breaking Phoenix Prime author program, which is leading a fundamental change in the digital publishing world.

When not reading or writing, Ryland is either on his bike or in his kayak exploring the spectacular Nelson-Tasman region of New Zealand (which is where he lives with his wife, Nina). And if he’s not doing that, he can often be found trying to get the attention of his cat, Pepper, who has the grace to allow him to share her home but who otherwise steadfastly ignores anything he does.

Ryland Thorn writes short and novel length fiction. You can find out more about him on his website: http://www.rylandthorn.com, and you can keep up to date with him via twitter: https://twitter.com/RylandThorn