DJ: Hey Weston! Thanks for agreeing to do this interview!

Weston Osche: I’m a military veteran with 35 years of service and counting. I’ve written about 30 books and won a few awards. One of my books has been optioned to be a movie starring Dwayne Johnson. I have three Great Danes and am married to the author, Yvonne Navarro.

DJ: What is Grunt Hero and then the Task Force Ombra trilogy about?

Weston: The Task Force Ombra Trilogy is about the lowest ranking soldier there is—the grunt. No admirals or generals here. It’s also about PTSD and how different people deal with it. In Grunt Life aliens come to Earth to try and destroy it. In Grunt Traitor, they basically destroy everything we know and love. And in Grunt Hero, we finally figure out why they did what they did and it pisses us off so much all we want is revenge.

DJ: What were some of your influences for Task Force Ombra trilogy?

Weston: There’s a section in the first book where everyone is locked up and forced to read all the great sci fi books that have been published and critically answer questions about them before they can be released. That listing contains all of my influences and I thought to myself, if we knew there was going to be an alien invasion, how could we study for it? Read what’s already been written and pay attention to the techniques, tactics, and procedures that those great authors had already gamed. Some of the authors include Joe Haldeman, David Gerrold, John Scalzi, and John Steakley.

Weston: They are all messed up in the head. Each one has PTSD for a different reason. Most of them aren’t broken, but they ae close to being broken.

DJ: What is the world and setting of the Task Force Ombra trilogy like?

Weston: I had to create exo-armor to fight the first wave of aliens. By the end of the first book, readers will see the really messed up tech I created using human’s a computing mechanisms to help us communicate with the invading aliens.

DJ: How have the reviews been from readers, bloggers, and reviewers for the first two books of the Task Force Ombra trilogy? Is there anything that your audience seems to be particularly enjoying or is eager to find out more about?

Weston: Both the publisher and I were worried about the amount of PTSD in the books. Something like this had never been done before. Would they appreciate it? Would they tolerate it? We were stunned and frankly over the moon with its reception. Readers, military members, veteran’s organizations, and hospital workers have all called this groundbreaking and cathartic.

DJ: What was your favorite part about writing Grunt Hero and completing the final book in the Task Force Ombra trilogy?

Weston: Getting an immense story down so that it can be shared. When I first began, I had a notion that began to grow and grow. To see it come to full fruition and become that thing which was only an inkling makes me feel accomplished as an author.

DJ: What do you think readers will be talking about most once they finish Grunt Hero?

Weston: About the characters and how they deal with their own internal issues and the other challenges that confront them.

DJ: Did you have a particular goal when you began writing the Task Force Ombra trilogy? Was there a particular message or meaning you are hoping to get across when readers finish it? Or is there perhaps a certain theme to the story?

Weston: Yes. Too often a PTSD sufferer is categorized as the crazy guy with a sniper rifle or the man road raging on the highway. PTSD, as Myke Cole says, is like the weather. Anyone can encounter it. A parent who loses a child has PTSD. A man who sees another man die has PTSD. A kid who got beat up has PTSD. PTSD is the syndrome where your brain struggles to deal with something. It can exhibit itself in many different ways. I wanted a cast of characters who all had PTSD for differing reasons because I wanted readers to understand that it’s okay to have PTSD. It’s not a stigma.

Weston: Although I’m more a pantser than a plotter, the ending and the character arcs ended about where I thought they were.

DJ: When I read, I love to collect quotes – whether it be because they’re funny, foodie, or have a personal meaning to me. Do you have any favorite quotes from Grunt Hero that you can share with us?

Weston: You’d have to read and let me know which are your favorite.

DJ: Now that Grunt Hero is released, what is next for you?

Weston: I wrote and turned in Burning Sky for Solaris, which is a military horror novel set in Afghanistan. I’m working on the sequel to that, Dead Sky, and I’m also working on a few other books. I had a big short story year this last year. I worked on the franchises of Hellboy, X-Files, Joe Ledger, Aliens and Predator. The Hellboy and Predator stories have yet to be published. This fall I’m working with DC Comics on a project. I’m super stoked about that.

DJ: Before we go, what is that one thing you’d like readers to know about Grunt Hero and the Task Force Ombra trilogy that we haven’t talked about yet?

Weston: If you think you know how bleak a world I’ve created out of what we once knew, you won’t even come close. I really messed our planet up.

DJ: Thank you so much for taking time out of your day to answer my questions! Thank you!

*** Grunt Hero is published by Solaris and is available TODAY!!! *** 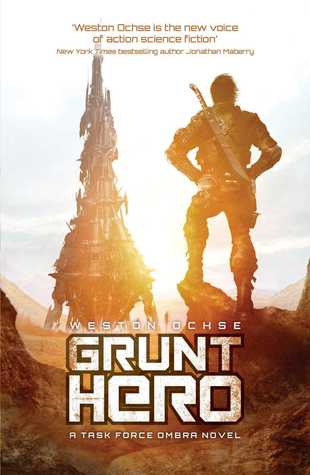 It is a time for heroes, for killers, for Grunts.

In this thrilling conclusion to the breakout military SF series, we find Earth plagued with millions of miles of terraformed cities, black vines crushing concrete, revealing iron and steel. Those unable to escape the vines are empty vessels waiting to be filled, living storage for alien algorythmic thought. What else can happen? What more can be done? This has always been a time for for heroes, for Killers, for Grunts, but are they enough?

Benjamin Carter Mason will be asked to return to OMBRA to help them find these answers, and what he finds will send him over the edge. In the end, his efforts won’t be about survival, they’ll be about revenge, and his revenge will be served in a blaze.

Weston Ochse is the author of more than twenty five books, most recently the SEAL Team 666 books, which the New York Post called ‘required reading’ and USA Today placed on their ‘New and Notable Lists,’ and his military sci fi novel Grunt Life. His first novel, Scarecrow Gods, won the Bram Stoker Award for Superior Achievement in First Novel and his short fiction has been nominated for the Pushcart Prize. His work as appeared in comic books, and magazines such as Cemetery Dance and Soldier of Fortune.

His last name is pronounced “oaks.” Together with his first name, it sounds like a stately trailer park. He lives in the Arizona desert within rock throwing distance of Mexico. For fun he races tarantula wasps and watches the black helicopters dance along the horizon. He is a military veteran with 30 years of military service and recently returned from a tour in Afghanistan. He’s traveled the world, been more to 50 countries, and blogs at Living Dangerously. You can google him under ‘Literary Stuntman,’ ‘Superhero for Rent,’ or ‘Yakuza of the Written Word.”