Today I am interviewing Kathryn Troy, author of the new romantic, epic fantasy novel, A Vision in Crimson, first book of the Frostbite series.

DJ: Hey Kathryn! Thanks for agreeing to do this interview!

Kathryn Troy: Hi DJ, thanks for having me! I’m a new voice to dark fantasy, and A Vision in Crimson is my first published novel. I’ve been a writer longer than I’ve been a novelist, with my nonfiction book, The Specter of the Indian: Race, Gender and Ghosts in American Séances, 1848-1898, being released by SUNY Press in September. Other than that, I’m a self-professed expert in all things weird and unnatural, a gourmand, and a world traveler.

DJ: What A Vision in Crimson about?

Kathryn: It’s a magical, romantic adventure that brings together a woman who escaped Victorian London to become a fantasy heroine with a vampire half-breed equally fed up with his limited choices. The chemistry between Kate and Luca on the page is explosive. But all is not well in paradise, and their disparate backgrounds and abilities are united to combat the terrors that creep into the mythical realm of Icarya.

DJ: What is the world, Icarya, and setting of the Frostbite series like?

Kathryn: I started with the familiar concept of idyllic fantasies like Narnia, populated with magical hybrids (an ideal place for a mixed-blood vampire to call home). Some of the unique flavors I’ve added to that trope are the Spiritualist concept of the “Summer Land,” a descriptive term for a heaven that is Edenic and Romantic but with all the loftiest aspirations of civilization—sciences, the arts, museums and libraries, set right alongside legends of animated forests and deep magic. The different cities within the greater Icaryan universe are not so fertile or fortunate; Likhan, a slaving city, is a close neighbor and tenuous ally of Icarya. That relationship will crumble in the first volume, and you will see its importance to Icaryan interests develop over the course of the series.

Another layer is that Katelyn and her brother, born into the wonders of a newly electrified city, bring that technology with them. Referred to as Icaryan light, its waning presents the challenge Katelyn is combating as the novel opens.

Some of my favorite fantasy worlds are the ones with rich religious cultures—that is something that also grows over the Frostbite series, simply because their forest-based beliefs are so ancient that they have been relegated to the stuff of legend. Kate’s pursuit of those histories and her relationship to them take up a good portion of her personal narrative in this epic tale.

DJ: I hear you have magic 😛 Tell us about that!

Kathryn: Naturally; what’s a fantasy series without magic? But magic in Icarya is something seen and felt, not learned. There are no great academies, no magical guilds. There’s just a collection of dust-bitten treatises and histories which Katelyn has mastered. There are many different forms of magic: elemental, blood, and shadow, to name a view. Not counting natural abilities. These are accountable forms of magic, where the crafter is responsible for the changes they impose upon the environment. Kate’s story is about learning how to balance the necessities and the risks of her magic, and the physical and psychological costs.

Add to that heady brew the supernatural abilities inherent to vampires. Luca’s vampiric side is the traditional one; his primary struggle is to accept his nature in the face of abuse and abandonment by his family and a deep, mutual hatred between vampires and humans. There is a duality to Kate and Luca in that they mature in solitude, often seeing their extraordinary gifts as curses. That familiarity is part of what bonds them together in the first place. They would be the ultimate power couple, if they can grow to accept their natures.

DJ: What are your vampires like? Anything particular unique that you’ve done to them to make them you own?

Kathryn: Yes, Luca is a traditional vampire hybrid, and his insidious father is the quintessential vampire. There’s just no other way to use this word correctly. If you don’t make ladies swoon as you suck their blood, then what are ya?

I treat Stoker’s vampire as sacrosanct, simply because it is as authentic as possible to folk traditions and lore, and my academic interests and specializations in these things would never permit a variant of those realities. They are broad and vastly more interesting than you can imagine, and you could pick little pieces here and there to incorporate to fiction and never run out of new aspects and features to spin. Unless you’re immortal yourself—then you might have an issue.

DJ: What was your favorite part about writing A Vision in Crimson?

Kathryn: I’ll admit it—the romance scenes. Not just the steamy scenes, (and I do mean steamy), but the romantic tension between the characters is always enjoyable for me, and I tried to craft those scenes in a way that will bond my readers to my characters emotionally, beyond the bus-ride blushing. That way, the fantasy plot (which is the actual plot), will feel that much more meaningful. One way to look at the Frostbite series is a fantasy story told from the perspective of a new relationship.

Kathryn: The Frostbite series is a continuous narrative, so my wish is that people will want to see what happens next. If you’ve grown attached to the characters, A Vision in Crimson will not give you the closure you want at the end of the tale. There are multiple smaller arcs within the larger framework of the series, but even the main tale is only partially told. Kate and Luca’s tale—the romance, their personal developments, and the dangers they face together and alone, are epic, and the dramatic conclusion will not come for a few books.

DJ: When I read, I love to collect quotes – whether it be because they’re funny, foodie, or have a personal meaning to me. Do you have any favorite quotes from A Vision in Crimson that you can share with us?

Kathryn: “What’s one murder between bedfellows?” That never ceases to tickle me.

DJ: Now that A Vision in Crimson is released, what is next for you?

Kathryn: This summer is going to be about finishing up loose ends. I want to get Book Two in the Frostbite series, Dreams of Ice and Shadow, ready for production, bring my current project Bog Body (another dark romantic fantasy) from first draft to final draft, and hopefully do the same for Notes from the Undead, my horror novella about a man who thinks he’s a vampire. Then I can start making some headspace for the projects-in-waiting. There are many.

Kathryn: Thanks so much for having me! 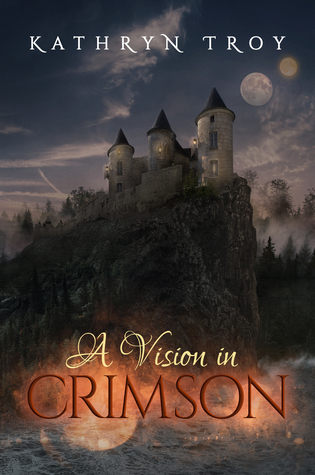 Katelyn knows her magic is risky, but Icaryan light is fading fast and she is desperate. Returning to Earth, she crosses paths with Luca, a vampire hybrid living on the outskirts of humanity.

Passion sparks their weary hearts. The rogue hunter follows Katelyn into a world teeming with wonder and danger, forsaking his own quest to root out his father.

But his father has not forgotten him.

A Vision in Crimson is the first installment of a new epic fantasy blistering with romance and Gothicism.

Kathryn Troy is an historian turned novelist and baker. Her nonfiction book, The Specter of the Indian: Race, Gender and Ghosts in American Séances, 1848-1890, is forthcoming from SUNY Press. Her historical expertise in the supernatural and the Gothic informs her fiction at every turn. Her genres of choice include dark fantasy, romance, horror, and historical fiction. She lives in New York with her husband and two darling children.